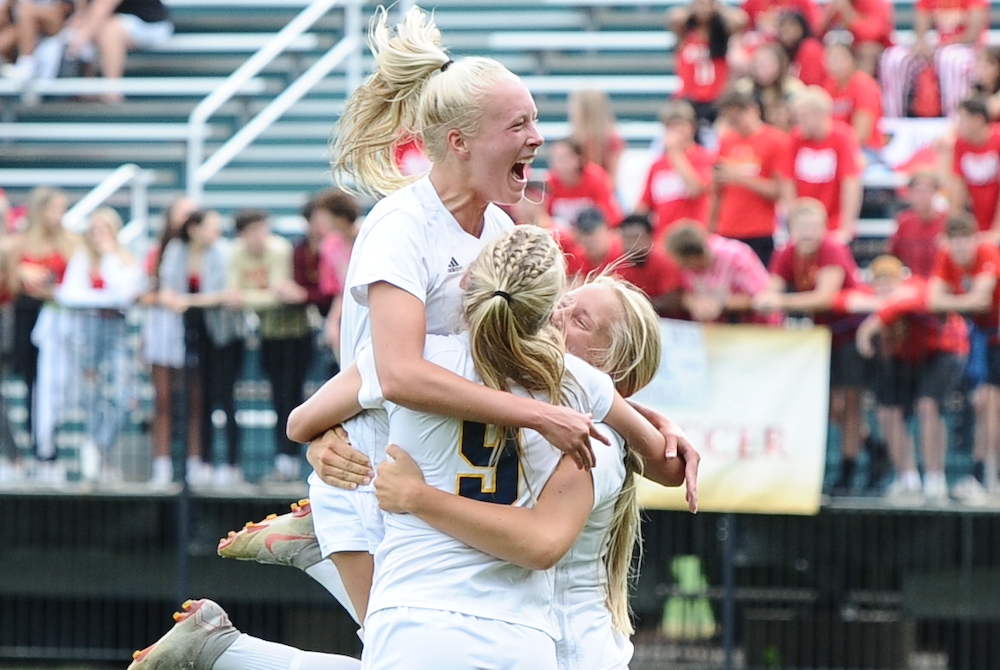 EAST LANSING – Hartland wasn’t supposed to be in the Division 1 championship game.

So, naturally, it was Pietila – hobbling on a severely sprained left ankle which almost kept her out of the game altogether – who scored two goals as Hartland blanked Troy Athens, 4-0, in Saturday’s MHSAA Division 1 Girls Soccer Final.

“It was hurting, but it’s the state championship game,” explained Pietila, who scored the Eagles’ first and last goals in the weekend’s final game in calm, dry conditions at Michigan State University’s DeMartin Soccer Complex.

“It was now or never, so I just went with it. Once I got into the swing of things, I forgot about it.”

Hartland (20-4-1) had entered the postseason off a third-place league finish and ranked 23rd in Division 1 based on the Michigan Power Rating used to seed the top two teams at the District level.

But the Eagles seemingly forgot about all of that and the fact that it had never played in a girls soccer Finals game before, shutting out six of its seven postseason opponents.

The Eagles capped it Saturday by making Athens – No. 2 in final regular-season MPR – pay for its aggressiveness with an impressive counterattack, then cashing in on their opportunities.

It was an emotional win for veteran Hartland coach Andrew Kartsounes – who has been teaching at Hartland for 30 years and coaching soccer for 27, including the past 16 as the girls head coach – in his first appearance in a championship game.

“I was wondering if I was ever going to get here, and then to play the kind of game we did today was just amazing,” said Kartsounes, who is assisted by Wade Foster and Eric Anderson. “We just kept plugging away and created chances and, today, we finished a lot of our chances.”

Hartland grabbed a 1-0 halftime lead after junior Hannah Kastamo broke through the Athens defense and put a shot on goal, which Pietila booted in off the rebound at the 16:56 mark.

The key portion of the game was the first 10 minutes of the second half. During that period, the Red Hawks controlled play and had two excellent scoring chances – a header off a free kick that missed wide right and a nifty boot by junior Abby Mayne which just missed wide left. 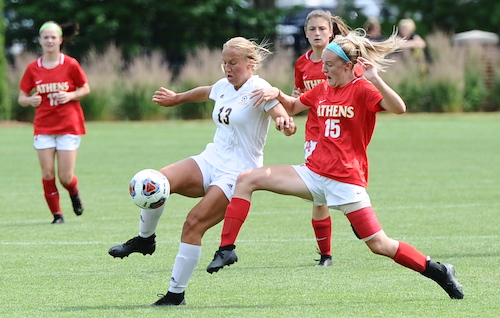 But just as Athens was feeling good about things and the crowd of red was coming alive in the stands, Hartland responded with its aforementioned counterattack.

Senior Maria Storm was able to break away and send a perfectly angled kick into the top-right corner of the net with 31:32 remaining to make it 2-0 – a goal which seemed to demoralize Athens. Just two minutes later, Hartland made it 3-0 on another goal by Kastamo.

“We haven’t seen that kind of counterattack in a while,” said 10th-year Athens coach Todd Heugh. “We generated corner kicks, and they generated goals. Soccer is a game of chances. They made good on theirs, and we did not on ours.”

Athens (17-2-4) has won four girls soccer championships, but its last title came 21 years ago in 2000. The Red Hawks, who had posted eight consecutive shutouts coming into Saturday’s Final, now have three runner-up finishes.

Kartsounes agreed the key to the victory was weathering the storm early in the second half.

“They started the second half and were really taking it to us,” said Kartsounes, who received tremendous on-field leadership from captains Kamryn Gereck, Justina L’Esperance and Storm. “I told my assistants that we can’t survive like this for 40 minutes, then we finally started possessing the ball.”

Pietila completed the scoring with her second goal of the day at the 18:21 mark. Alyse Daavettila and L’Esperance added assists for the Eagles.

The only postseason game in which Hartland allowed a goal was Wednesday’s Semifinal, a narrow 3-2 win over Grand Rapids Forest Hills Central. It was also seven minutes into that game when Pietila sprained her ankle on a sprinkler.

“On Wednesday night, there was no way she was going to play, Thursday was a little better and it wasn’t until after warmups today that we knew she was going to play for sure,” said Kartsounes. “Then she goes out there and scores the game-winning goal of the state finals on one leg.”