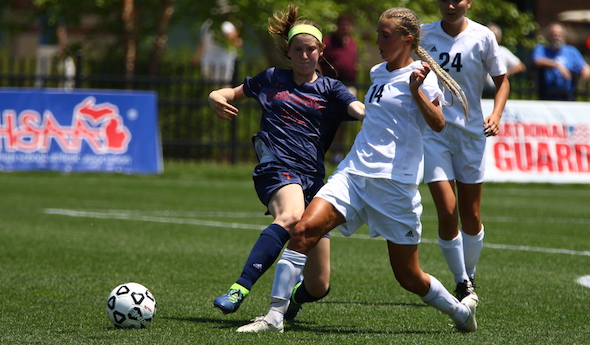 
EAST LANSING – Hudsonville Unity Christian junior goalkeeper Emily Ponstein had both arms around the championship trophy and clutched it to her chest.

“I think I’m going to take it home with me,” she said.

Ponstein wasn’t going to let go of the trophy, much like she didn’t let go of any ball that was sent in her direction Saturday afternoon at DeMartin Stadium on the campus of Michigan State University.

Ponstein made seven saves as the second-ranked Crusaders defeated No. 1 Flint Powers Catholic 2-0 in the MHSAA Division 3 girls championship game.

Unity Christian coach Randy Heethuis, in his 27th season leading the Crusaders, heaped a ton of praise on his junior keeper.

“She made at least three or four fantastic saves. She basically stood on her head and kept Powers off the board,” he said. “That was by far her finest game she has had for us, and what a great stage to do it on. It was neat.”

Ponstein was at her best about 10 minutes into the second half when she stopped two shots directly in front of the net. She added a diving save to her left later in the half.

“I saw her coming in, and I was like, ‘No, not today, sorry,’” Ponstein said of the first shot. “The second one was tougher because it was in the air and it was a quick reaction save. The one I had to dive for came in a lot quicker than I expected. It was a great shot, and they are a great team.”

Flint Powers (21-2-1) outshot Unity Christian 16-3 and had the edge on corner kicks 5-1. But Ponstein clearly was the difference.

“I give a lot of credit to that goalie,” Flint Powers coach Art Moody said. “She made some amazing saves. If one of those shots goes in, it’s a different game.”

Ponstein said seeing so many shots actually might have worked in her favor.

“The constant pressure makes you really tired at the end of the game, but I think it keeps me on my toes,” she said. “Since I don’t get a break, I don’t have a chance to lose focus.”

Junior midfielder Alaina VanZalen gave Unity Christian a 1-0 lead in the 29th minute of the first half. She found the net from the left side of the top of the box and beat the Flint Powers goalkeeper on the short side. It was the first shot on goal of the game for the Crusaders.

“I shot it, and I really didn’t think it was going in,” she said. “I was shooting at the short side, and (the keeper) was there but it kind of snuck under her. It was a great surprise.”

It also was something that was part of the game plan.

“I saw a goal that somehow slipped under their keeper,” Heethuis said. “We talked about it at practice and said we want to test this keeper on the low side. I was screened out, so I couldn’t see it, but I saw Alaina shoot, and I just saw it stayed on the ground and went in. How it went in, I’m not exactly sure.”

The game stayed 1-0 until late in the second half. Sophomore Alexis Ponstein, younger sister of the goalie Emily, dribbled more than 50 yards on a breakaway and scored unassisted in the 78th minute to basically put the game away.

Ponstein, the goalie, was emotional talking about her little sister scoring a goal.

“I’m so proud of her,” she said through tears. “She has worked so hard.” 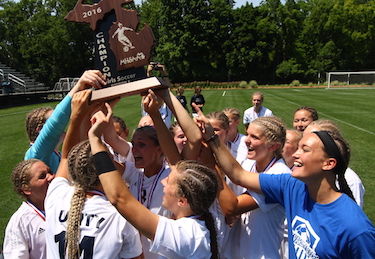 Most of the Unity Christian team actually did not want Alexis Ponstein to take the ball to the net.

“When she got the ball, there was part of us on the sideline saying, ‘Take it to the corner,’ ” Heethuis said. “That’s not in her DNA. She took it and realized she had one player to beat, and she got around her. Give that defender credit. She got a foot on the first shot, but then Lex just cleaned it up and nicely passed the ball into the side netting.

“We’ve been getting on her about hitting the ball too hard sometimes, and she didn’t that time. She took something off it and neatly tucked it into the corner. She must have been listening.”

She might have listened about the hard shots, but she didn’t listen about going to the corner late in the game.

“I was going down the center, and Coach is screaming at me, ‘Go to the corner, waste time, go to the corner, so I picked my head up and the last girl just stabbed, and I went around her and realized it was just me and the goal, so I just went for it,” she said

It was the final game for two-time all-stater Maddy VanDyke, who last year scored the game-winner in double overtime to give Unity Christian the Division 3 title. She was just as happy this year to win even though she did not score.

“We still won it. I don’t care who scores; we win, and it means a lot,” said VanDyke, who will play on the same field next season for Michigan State University. “I have a lot of memories here for high school, and I hope to make a lot more for college.”

VanDyke went out a three-time champion.

“Maddy VanDyke showed what kind of player she is,” Heethuis said. “She got a little dinged up, but I couldn’t be prouder of her.”

Defense has been the key all season for Unity Christian, which had shutouts in 10 of 18 regular-season games. The Crusaders became even stingier in the tournament, posting shutouts in six of seven games, including the title game. They allowed more than one goal just twice and gave up 11 goals total over 25 games.

Ponstein gave up only seven goals playing the majority of the minutes this spring and finished with 15 shutouts.

“We’re disappointed that we didn’t generate more corner kicks, but we just defended and defended,” Heethuis said. “A lot of people could look at this game and say we got outplayed, but the fact of the matter is that we won. We’ll take it. We’re going to enjoy it.

“There are no style points in soccer.”