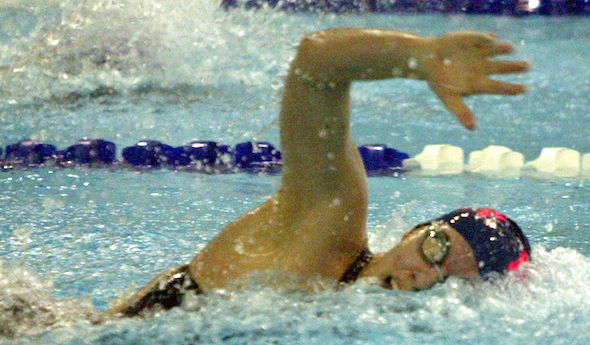 HOLLAND – East Grand Rapids swim coach Butch Briggs has won numerous MHSAA Finals championships over his 42 years of coaching the powerhouse program. But this year’s group has a special place in his gallery of champions.

The Pioneers captured their 20th MHSAA title since 1972 on Saturday, earning the Lower Peninsula Division 3 championship at the Holland Aquatics Center. East won the title in impressive fashion as it totaled 512 points. Bloomfield Hills Marian finished second with 364. Holland Christian totaled 175 points to place third overall, followed by reigning champion Grand Rapids Catholic Central with 172 and Milan with 134 to round out the top five.

“I’ve been coaching for 42 years, and this is the best swim team East has ever had,” said Briggs. “To swim this well and have such a great group of swimmers; this is our best team, hands down.”

Not only did East Grand Rapids pile up the points, but it also piled up meet records. East swimmers started the Finals off with a record-breaking performance in the 200-yard medley relay from sophomore Sydney Higgins, junior Ileah Doctor, senior Emma Rao and sophomore Laura Levine in 1:44.97.

“”This is very special,” said Rao. “We definitely knew we had the ability to do this. I think the key for us is that we were just so pumped up to be in the state finals.”

Like her teammate, Levine pointed to East’s inner drive as being key to the record-setting win.

While the Pioneers set a new relay record, Doctor also posted a pair of individual records for East.

“I was not expecting it at all,” Doctor said. “It really helped having my teammates being there for me.” 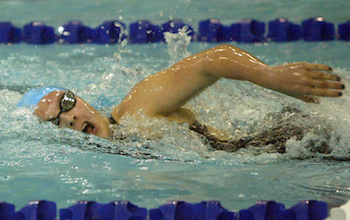 Helping the Pioneers win the team title was just as important to the talented junior.

“We came down here so excited, and it’s been really been great,” Doctor said. “We knew Marian was dropping down to Division 3 so we knew we had to be ready if we wanted to win. We knew with Marian here that we were not going to run away with this.”

Doctor was also part of East’s 200 free relay team that turned in a record time of 1:33.89. Seniors Lexus VanHoven, Hanna Sanford and Gabby Higgins joined Doctor on the relay team.

Higgins and sophomore sister Sydney Higgins also captured individual titles for the Pioneers. Gabby won the 100 freestyle in a time of 50.70 while Sydney Higgins captured the 100 backstroke in 56.57.

Milan was powered to its top-five finish by a pair of championship efforts including a record-breaking swim. In the 200 IM, junior Madelyn Cislo set a record for LP Division 3 as she turned in a time of 2:04.62.

“This feels really awesome,” Cislo said. “Last year was a tough one for me. I was seeded first but I had a rough day. This year I came in with the attitude that no matter what, I will just have fun. In the last 50 meters, I just said to myself `Cislo, how bad do you want this.’” 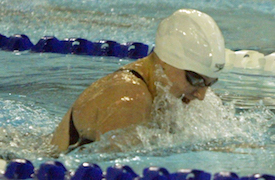 In the diving competition, Milan sophomore Mackenzie Crawford came in as the top seed and performed up to form, totaling 478.3 points to win the title. The victory capped an undefeated season for Crawford.

“It felt really good,” Crawford said. “I was really nervous on some of my dives, but I just calmed down.”

Competing in this year’s Finals was extra special for Crawford, who missed most of her freshman season due to a knee injury.

“I’ve been diving since I was 5 years old,” Crawford said. “I dive five days a week. Diving is what I love to do.”

Pontiac Notre Dame freshman Rhianna Hensler also enjoyed a huge Finals. Not only did Hensler cap her freshman season with an individual title, but also she set an LPD3 meet record as she won the 100 butterfly in 56.21 to edge Susan LaGrand of Grand Rapids Catholic Central (56.24).

“It was very surprising,” Hensler said. “I came in wanting to swim my best time. I swam my best time at the county meet and I came in here hoping to swim in the high 57s, and I end up going in the low 56s. To win a state title and set the record too is very special.”