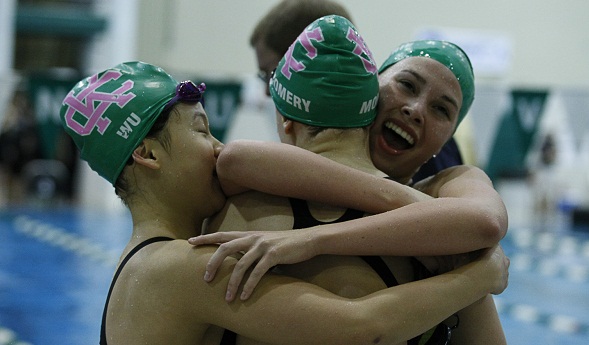 By Gary Kalahar
Special to Second Half

YPSILANTI – By the time she is finished with her high school career, perhaps Plainwell’s Mallory Comerford will be an MHSAA champion in all eight individual swimming races.

Sounds a bit far-fetched to be sure. But after Comerford’s performance Saturday in the MHSAA Lower Peninsula Division 3 meet at Eastern Michigan University, would anyone care to bet against her?

Comerford, a sophomore, made it four championships in four different races by winning the 200 freestyle and 500 freestyle in dominant, record-breaking fashion.

Bloomfield Hills Cranbrook-Kingswood used its outstanding depth – scoring at least 15 points in every race – to swim away with its second consecutive Division 3 team title. The Cranes scored 361 points, and Bloomfield Hills Lahser finished second with 211.

As a freshman, Comerford was the champ in the 50 freestyle and 100 freestyle. Plainwell coach John DuBois said with another excellent long-distance freestyler last year, Comerford was placed in the sprints to give the Trojans the potential for more points.

“So we trained her in sprints, but her love is distance,” DuBois said. “It wasn't a hard transition at all.”
It certainly didn't look like it, especially on the final weekend.

“I was real happy with how I did,” Comerford said. “I’m very excited. I felt smooth going in the water Friday, and it was the same way (Saturday).”

Comerford’s 4:58.18 in the 500 freestyle preliminaries established a meet record. That one lasted about 24 hours, too, as she went out fast and never slowed down in a 4:53.14 final. She won by 13 seconds with a time that would have made her a winner at the day’s Division 1 or Division 2 Finals.

“That was a surprise to me,” Comerford said.

Ten minutes after that race, Comerford was back on the blocks for the anchor leg of the 200 freestyle relay, boosting the Trojans from sixth place to fourth.

“I had to be there for my team,” Comerford said. “I just had the belief that I was fresh and I could do it."

She brought Plainwell from seventh to fourth on the final leg of the 400 freestyle relay, but the Trojans were disqualified.

“I knew it would be tough, but it was definitely worth it,” Comerford said about switching her focus to the longer distances. “It was a lot more yardage, a lot tougher on your body to be prepared for the longer races. My coaches, John DuBois here and Jeff Russell with USA Swimming, have pushed me as hard as I could go. I couldn't do what I've done without them.”

DuBois, whose team finished fifth with 140 points, said Comerford’s willingness to swim the events where she could most help the team is representative of her attitude.

“She’s a phenomenal athlete, she has great character and she’s an unbelievable worker,” he said. “She obviously is gifted, and we’re lucky to have her at Plainwell. She’s been a model academically and athletically. She’s all the things coaches love to have.”

Another thing all coaches would love to have is the depth of Bloomfield Hills Cranbrook-Kingswood rode to the team title. The Cranes had no divers but had girls swimming in every final race. In nine of the 11 events, they scored at least 23 points.

“A lot of it goes to the competition that we started with the first day of practice,” first-year Cranbrook-Kingswood coach Chris Bagley said. “It’s unbelievable to think about how deep we are.”

Senior Kylie Powrie swam on teams that finished second in Division 3 her freshman and sophomore years and won titles the last two.

“It’s amazing,” Powrie said. “Our team has come so far. We've improved so much over the years. I never would have thought this was possible my freshman year. When I started, it was hard for us to fill up all the events.”

Powrie, the 2011 champion in the two races won by Comerford this year, finished her career by helping the 200 freestyle and 400 freestyle relay teams to victory, the latter in a Division 3-record 3:33.63.

“We just wanted our team record, and we got it and got the state record,” Powrie said.

“We knew we were going to have high expectations, but to do what we did, the way we did it, is just unbelievable,” Bagley said. “We set our goals at the beginning of the year, and we never talked about winning a state title. We talked about being the most improved team in the state, and I think we did that.”

Ines Charles led runner-up Bloomfield Hills Lahser. She repeated as champion in the 100 backstroke, helped her 200 medley relay team to a second straight title and finished second in the 100 butterfly.