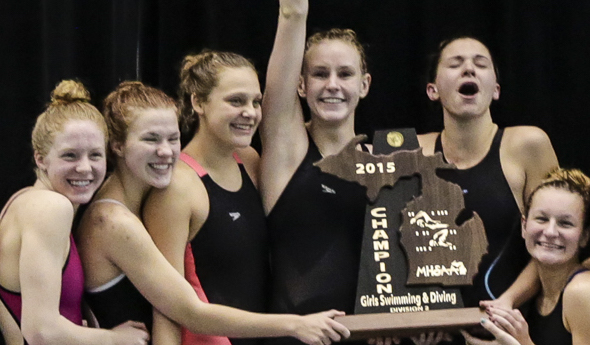 ROCHESTER HILLS — All of her obligations for the weekend were complete.

She went through all of the post-meet celebrations, standing on the podium with her teammates to accept the trophy, diving into the pool with them and their coaches (still in street clothes), posing with the trophy and conducting an interview.

Everything started to sink in as Schultz picked up her belongings from the pool-side bleachers, the last Dexter swimmer to depart the deck.

Schultz started the finals popping off Dexter's winning 200-yard medley relay team, won the 200 and 100 freestyle races and capped the championship by securing third place for the Dreadnaughts in the 400 relay.

Dexter needed to finish in the top five in the final event, which East Grand Rapids won. The 32 points the Dreadnaughts received for taking third gave them a 256-251 victory over the Pioneers, who moved into Division 2 after winning the Division 3 title the last two years.

It is the second MHSAA title for Dexter, which won Division 2 in 2002. The Dreadnaughts have been second seven times, including three times to East Grand Rapids, which has a record 19 MHSAA championships.

How much did it bother Schultz that she didn't win all four of her events?

"It's not a problem at all," she said with a smile. "I'm very proud of getting that third, because we got first overall."

With a time of 1:47.89 in the 200 freestyle, Schultz won by a sizeable margin of 3.35 seconds over Rochester Adams senior Claire McGinnis, who would go on to win the 500 freestyle. Taking third was East Grand Rapids senior Emily Converse, who was on two winning relays Saturday after winning seven of her eight events the last two years in Division 3.

"The 100 freestyle was anyone's game," said Schultz, who was named the Division 2 Swimmer of the Meet by the coaches association. "That was a race to the death on that one. I was so glad I got that third one. That was cool. All those girls pushed me to get there."

With two events remaining, Dexter was in third place with 188 points, 20 behind East Grand Rapids. The Dreadnaughts' comeback started in the 100-yard breaststroke, which Dexter senior Lizzy Merriman won in 1:03.68. Senior Kate Mesaros picked up 16 crucial points by taking third in 1:04.15.

"I was really nervous going in, because last year I was seeded second going into the finals and ended up getting sixth," Merriman said. "It was good to have one of my teammates next to me racing me. I have to give some credit to her, because she's my building block, I guess. It was pretty painful, but still good."

The performances of Merriman and Mesaros gave Dexter a one-point lead over Grand Rapids Forest Hills Central and a 13-point cushion over East Grand Rapids. 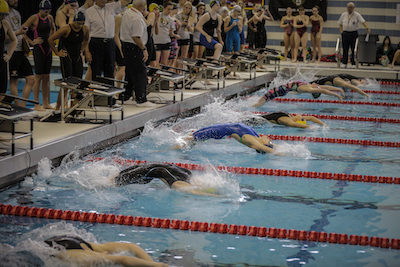 The Dreadnaughts closed the deal when the 400 freestyle relay team of senior Sarah Lynch, sophomore Sarah Zofchak, sophomore Amelia Kinnard and Schultz took third. Schultz closed with a 100-yard leg of 49.61 seconds, the fastest split in the event.

"I gave them the game plan," Dexter coach Cory Bergen said. "Safe starts and go like (crazy) when you hit the water. I went over it about 1,000 times, so they knew. I have the fastest freestyler in the meet at the end; we knew what we had to do."

Forest Hills Central was also in contention heading into the final event, finishing third with 247 points. A remarkable 80 of those points came in diving, as the Rangers swept the first four places and added another all-state finish with a seventh.

Junior Erin Neely repeated as the diving champion with a score of 485.20 points, a Division 2 meet record and only 4.35 points shy of the Lower Peninsula all-Finals mark set by Albion's Elyse Lee in 2003.

"I just felt like it was any other meet," Neely said. "Just go in there and dive."

"We really push each other to do our best," Kramer said. "It's nice to compete against them, because I'm always trying to do better and better."

"All of them increased their (personal records) by at least 30 points, which is so cool to watch as a coach," said Forest Hills Central diving coach Jasmine Ramahi, a former diver for Grand Valley State University.

"What's so great is they're all so close competitively diving-wise, but they can put that aside and be friends. It's really cool to watch how they push each other, because they know they're each other's best competition."

Proving that the Rangers' program isn't one-dimensional, sophomore Felicity Buchmaier took to the pool in the first event after diving and won the 100 butterfly in 55.60 seconds. Buchmaier was third last year behind senior Taylor Garcia of Holland and sophomore Emma Cleason of Ann Arbor Skyline, which moved into Division 1.

"I had a little bit of a feeling, because Skyline had left to go to Division 1 and Taylor Garcia graduated," Buchmaier said. "I came in third last year, so subconsciously I guess it was in my mind, but I had never dreamed it. I started crying yesterday when I knew I was the first seed; it was crazy."

Senior Claire Young became the first Grosse Pointe South swimmer to win two events in the same MHSAA Finals, taking the 200 individual medley in 2:04.78 and the 100 backstroke in 55.20 seconds.

"It's amazing," Young said. "It's been four long years training and working with awesome teammates helping me through it."

Defending-champion Marian finished in fourth place with 214.5 points. Leading the Mustangs was one of the stalwarts from their championship team, junior Sophia Schott. She repeated as the 50 freestyle champion in a personal-best 22.99 seconds. She won in 23.66 seconds last year, and has five MHSAA titles to her credit.

"It was my goal this year to break 23," Schott said. "I'm so happy I did it. I know I could never have done it without my teammates' support. Right before a race when you're super, super nervous, like so scared, you just look at your teammates, take a deep breath and it's like, 'I can breathe; they're all supporting me.'"

Rochester Adams’ McGinnis, who competed in club swimming during the fall until this year, won the 500 freestyle in 4:59.18.

"I just wanted to have fun my senior year," said McGinnis, who will swim for the University of Miami (Fla.) next year. "I thought it'd be fun to come out and try to win the 500. I wanted to be more part of a team, too. It's been really fun. It's a different dynamic, but I'm really happy I got to be part of something like this."

East Grand Rapids put itself in a position to win by winning the 200 and 400 freestyle relays with the quartet of VanHoven, Hanna Sanford, Converse and Higgins.

PHOTOS: (Top) Dexter celebrates its Division 2 championship from the top of the awards stand Saturday. (Middle) Swimmers launch into the pool for the backstroke championship race. (Click for more from HighSchoolSportsScene.com.)