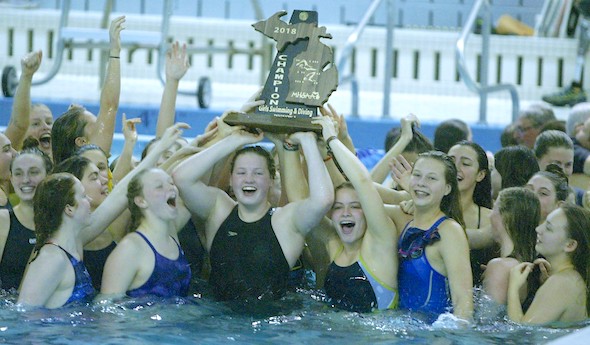 HOLLAND – The more things change for the East Grand Rapids girls swimming & diving team, the more they remain the same.

After graduating a large and talented senior class that led East to the 2017 Lower Peninsula Division 2 championship, the Pioneers moved back into Division 3 and won their 22nd MHSAA Finals title in the sport, and third consecutive title.

For East Grand Rapids, the keys were a new crop of talented swimmers carrying on the tradition of hard work and winning, and a senior class determined to carry on the legacy as well.

“We lost two great senior classes the last two years that have been able to win state championships,” said East Grand Rapids coach Butch Briggs. “Losing 20 kids each year and being able to come back and keep it going is really extra-special for this group of kids. We had a lot of young kids that helped us immensely.”

Higgins also won the 200 individual medley in a time of 2:07.82. Higgins used a strong finishing kick to come back and pick up extra team points.

“I’m really happy,” Higgins said. “It’s good points for the team, so I’m excited. I just swim my own race and don’t really look at anyone else.”

East Grand Rapids senior Laura Levine earned all-state honors in both the 50 freestyle and as part of the 200 free relay.

“It’s crazy,” Levine said. “Honestly, I couldn’t ask for a better team, a better state team and better coaching. Coach has been with me since I started swimming. We had a lot of freshmen this year that really pulled their weight. They were all super positive. Our seniors were also amazing. We lost a lot of good people, and we filled those spots and came out victorious.”

Lauren Ors and Emily Bergstrom were part of this year’s senior class that carried on the Pioneers’ swimming legacy.

“This is one of the most special meets of my whole life,” Ors said. “It’s because of the people I’m with. This team is absolutely incredible, and we’re so lucky to be a part of it.”

Bergstrom also credited the chemistry of the entire program for the team’s success year after year.

“This is such a special experience, and we are so blessed to be with such a great coaching staff and such great teammates,” Bergstrom said. “This is absolutely incredible. This team has just worked so hard for such a long time.”

“Today I was really trying to break the D3 record, and I did so I’m really freaking out right now,” Crawford said. “I was so close. It was by five points that I broke it.”

Crawford, who signed with Ohio State University earlier in the week, broke the record by coming up big on her final dive, a reverse one-and-a-half, one-and-a-half twist.

“It’s so hard for me to do,” Crawford said. “It’s more of a dive that huge guys do. It’s one and a half flips, one and a half twists and it’s reverse too, so it’s scary. I needed to get sevens on it, and I got a lot of big points.” 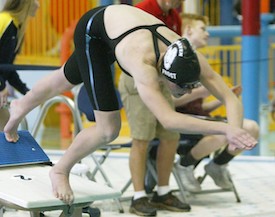 Hamilton was led by its 200 free relay team of Hannah Fathman, Ayvah Johnson, Jenna Kloosterman and Nella Pashak, who turned in a winning time of 1:36.30.

Grosse Pointe Woods University Liggett placed sixth as a team led by a pair of swimmers who won a combined three individual titles. Junior Sophie Housey claimed a pair, in the 100 freestyle in a meet record time of 50.23, and then the 200 freestyle in 1:48.37.

Bloomfield Hills Marian finished fourth as a team, led by its 200 medley relay team of Lauren Sielicki, Mary Snyder, Anika Fassett and Julie Waechter. They placed first in a time of 1:46.71.

Plainwell freshman Riley Nugent, competing in her Finals, claimed her first championship as she won the 500 freestyle in a time of 5:02.02. The top seed coming into the race, Nugent shrugged off the pressure and set a new personal record by some four seconds.

South Haven sophomore Ellie Frost won the 50 freestyle in a time of 23.59. As a freshman, Frost was runner-up in both the 50 and 100 freestyles. Not only was it Frost’s first Finals title, but the first in South Haven school history.

“It’s real exciting,” said Frost. “I’m so happy. I just tried to focus on the end goal this year, and it worked out. It was a really close race. I’m really happy with it, and it’s so exciting to have my teammates here with me to share it.”