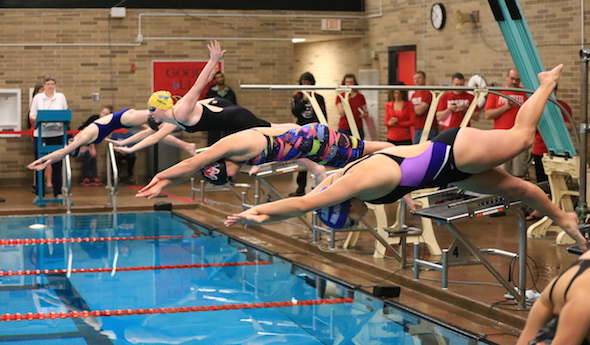 MARQUETTE – In a deficit to begin the day, the Gladstone swimmers had their work cut out for them.

So when it got down to the final three events of the day, and the PA announcer read off the standings, the elation and excitement when Gladstone was called in first place for the first time was genuine – the result of a hard day's work with little room for error.

By the time the final event, the 400-yard freestyle relay, it was a victory lap for the Braves, who were crowned Upper Peninsula champions for the first time Saturday at the MHSAA Girls Swimming & Diving Finals at Marquette High School.

Gladstone, which practices at the Northern Lights YMCA of Delta County, does not have a diving team. So the Braves could only watch Friday as their competitors built an advantage.

"Knowing we don't have diving, and we were going to give up those points, I talked about building depth in the team," said Gladstone head coach Tom Desy. "If we were going to win, we had to be strong in all events, all the way through. The girls dedicated themselves this year to do that. I had a lot of girls step up and swim events that they normally don't like to swim, but they did it for the good of the team."

Gladstone won with 281 points, followed by Houghton with 244 and Marquette with 241. The relatively tight finish was even closer prior to the final events. Before the 17th event, the 200 freestyle relay, Houghton had a slim lead, followed by Marquette and Gladstone. All three teams were within eight points of each other.

But the Braves' saved their best for last. Their 200 freestyle relay team of Jesse Flath, Sydney Herioux, Kirsten Williams and Lindsey McCann finished first with a time of 1:48.98. Gladstone followed with a victory in the 100 backstroke, 100 breaststroke, and 400 freestyle relay, sweeping the final four events to surge past the competition.

Katie Stephenson had an outstanding day for the Braves. The junior placed first in the 100 backstroke (1:04.15), the 50 freestyle (25.72), anchored the Braves winning 400 freestyle relay and was part of the winning 200 medley relay team, the latter of which had a time of 1:57.63, just four tenths of a second off setting a U.P. Finals record.

"It was just adrenaline today," said Stephenson. "I got out of the 100 backstroke and I was breathing so hard, I puked. But I hopped back in. I wanted to finish it (400 freestyle relay) for (senior teammate) Jesse (Flath)." 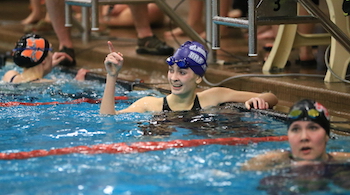 "Everyone tried their hardest today; it was amazing," exclaimed Flath. "It's amazing considering it's only our fourth year as a team."

Houghton held the lead for a good part of the day, but coach Erik Johnson was satisfied with the runner-up finish, saying his team exceeded expectations.

"If you told me at the end of the meet last year that we were going to finish second, I would have told you, you're out of your mind," he said. "We had a phenomenal meet."

The Houghton girls captured a bevy of second and third-place finishes, with no individual winners, but used their depth and consistency in all events to stay in contention.

"Our girls were undefeated during the season. They knew what they had to do and really stepped up," Johnson said. "Sam Olson was third in the 200 free, and second in the 500, and that helped a ton. It doesn't always come down to winning events. It comes down to those kids that squeeze into sixth place."

The Gladstone swim team, which has a co-op with neighboring Escanaba, was ineligible to compete in the U.P. Finals its first two years, as a club program. But Gladstone’s team became varsity for the 2014-15 season and quickly made a splash with a runner-up finish.

Desy has been there to see his team grow. Prior to taking the coaching job with the Braves, he ran the feeder program at the YMCA for eight seasons.

"This is a proud moment," Desy said. "I'm proud for the Escanaba and Gladstone combined schools. I’m proud of the girls that were on this team, some of which may not have continued through the YMCA without a high school program in place. I'm also very proud of the work I did for the Y, because the Y does a great job with the swim program. Normally without a high school team, those kids would go on to other sports. Now they have a focus to keep swimming and trying hard."

PHOTOS: (Top) Swimmers launch during a race Saturday at Marquette High School. (Middle) A Gladstone swimmer points to the clock as her team made its first MHSAA championship run. (Click for more from Jarvinen Photography.)