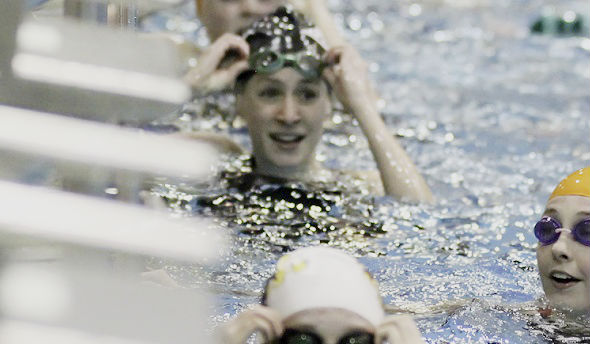 The first: Volleyball or swimming?

"I had a lot more fun during swimming, because of the people that I met," the Grand Blanc junior said. "When you get really good times, it's the best feeling in the world, so I just stuck with swimming."

Travel seasons in most sports don't conflict with high schools seasons, but swimmers have the option of competing in non-school programs rather than their high school teams. It was certainly a consideration for Curtis, a year-round swimmer who was beginning to hit her stride entering ninth grade.

Once again, as was the case when choosing a sport, the personal relationships she developed tipped the scales in favor of the high school team.

"I met great people," she said. "I just wanted to stick with them. I just loved the people. They have really good practices and I love the coach, so I just stuck with high school."

That was a huge relief to Grand Blanc coach Emily Overmyer, who knew about Curtis from her summer club performances and who coached her brother, Bailey.

"We were really glad she came out," Overmyer said. "She started to drop time instantly and became a very big factor on the team as a freshman."

Curtis had her first all-state performance as a freshman in the 2013 MHSAA Lower Peninsula Division 1 meet, swimming the first leg for the seventh-place 200-yard freestyle relay team. Curtis teamed with Eryn Scannell, Rachel Eaton and Lindsay Baywol, a quartet that previously had set the Kensington Lakes Activities Association Lakes Conference record with a time of 1:38.46.

Curtis missed out on all-state in the 50 freestyle when she lost a swim-off with South Lyon's Stormy Malarik for the eighth and final spot in the championship heat. All eight swimmers in the final make all-state from MISCA. Curtis wound up with a 10th-place finish after swimming the consolation heat. 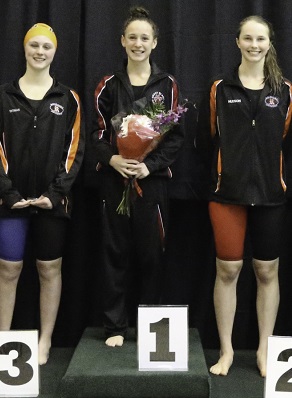 Those were solid performances for a ninth-grader in her first MHSAA Finals meet, but they didn't foreshadow what was to come for Curtis last year. Even Curtis had no idea that the stage was set for her to make history the following season.

"Going to states my freshman year, I didn't really place well because it was my first time," she said. "I wasn't very good back then, so going into my sophomore year, I didn't expect to place really high."

She came to the LP Division 1 Finals at Eastern Michigan University to culminate a season in which she set five individual or relay school records, giving her a total of six in her first two years.

When Curtis stood on the starting board for the 50 freestyle final, she was about to hit the water with three other swimmers who beat her the previous year. Not only did Curtis have to lower her own times as a sophomore, but she needed to improve at a greater rate than her competition.

Curtis touched the wall with a time of 23.60 seconds, but it wasn't a clear-cut victory. Rockford senior Erin Hudson, who was second in 2013, hit the wall at nearly the same time.

"It was a very, very close race," Overmyer said. "Everybody had to look at the scoreboard to see what the actual result was, because you couldn't tell by the naked eye."

Curtis' name was in first place by one-hundredth of a second over Hudson. Curtis didn't look at the scoreboard to see if she had won. The faces of her teammates on the pool deck said it all.

"When I finished at the wall all of my teammates were screaming, 'You won states, you won!" Curtis said. "My friend (Scannell) actually pulled me up out of the water when I won; she's just funny."

Curtis knew she was in a close battle, catching occasional glimpses of Hudson during the race.

"That was really exciting," Curtis said. "When I would take a breath, I would see she was right next to me. I was trying to push through and go fast."

The Bobcats have had a strong swimming and diving program over the years, but Curtis became only the third MHSAA champion from Grand Blanc. Julie Little was the Class A diving champion in 1989 and Sarah Salenski won the 100 breaststroke in 1992.

Curtis' day wasn't done. She improved to fourth place in the 100 freestyle with a time of 52.01 seconds, then helped Grand Blanc take fifth place in the 200 freestyle relay, along with Sydney Schmit, Lindsey Sieloff and Scannell.

Earlier, Curtis was on a 12th-place 200 medley relay team.

"At the last state meet, I just did not feel good at all," Curtis said. "I was really tired when it got to the 100. Both are sprint races, so the 100 takes a whole lot more out of you. You could say I'm better in the 50. I'm getting a lot stronger in the 100. I did really good during the summer. It's a long course (during non-school events), so it's 100 meters instead of 100 yards. I don't really know what my time would be in yards, but it was a good time for a long course."

Now that Curtis is a defending MHSAA champion, she can't sneak up on anybody when the Division 1 Finals are held Nov. 20-21 at Holland Aquatic Center.

Overmyer is trying to ensure Curtis doesn't feel any undue pressure to repeat.