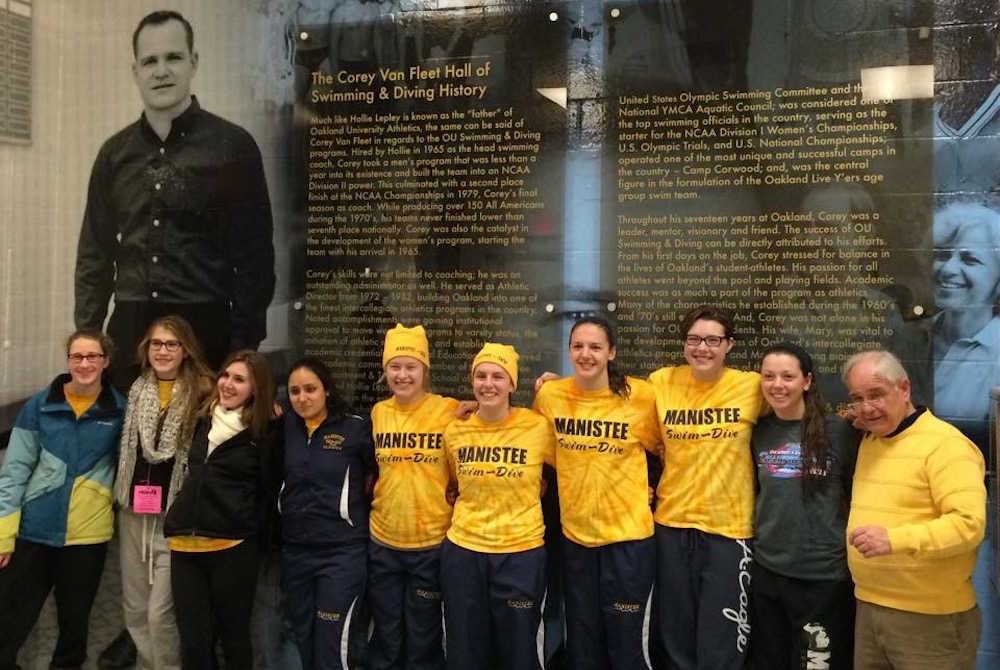 Name any high school or community pool in Michigan, and odds are Corey Van Fleet has been there.

Perhaps it is true of any pool in the United States.

And, a little more odds. If the pool hosted an MHSAA Finals meet, one of Van Fleet’s teams likely participated. Although he won’t have any qualifiers making the trip to the Division 3 girls meet Friday, he’s been to championship weekend lots of times with Birmingham Seaholm and Manistee. His 1962-65 Seaholm boys teams won four straight Class A Finals, and his Manistee boys team is coming off a Finals trip last winter and its best season ever.

Van Fleet, now 85 years young, is in his 68th of coaching swimmers. He’s spent the last 13 with the boys and girls teams of Manistee High School. He started the program after helping build the pool.

The school utilizes the Paine Aquatics Center named after Bill Paine, who presented a proposal to the City of Manistee, the Manistee Area Public Schools and Van Fleet. Paine’s proposal called for the pool, which opened in July 2009, to be attached to the high school facilities.

“So I’m sitting in my office one day and this tall, lanky guy (Paine) walks in and closes the door and says my wife and I want to donate an aquatics complex in Manistee, and Sandy Saylor says you know something about swimming,” Van Fleet recalls. “‘Will you help me build it?’

“We talked about it for a while and I said yeah, I’d help him,” Van Fleet continued. “So we ended up with a nice eight-lane swimming pool in Manistee.”

Van Fleet, who also had coached at Florida State, coached and served as athletic director at Oakland University and then served as AD at Long Beach State (Calif.) during an illustrious career at the college level, took the next step naturally. 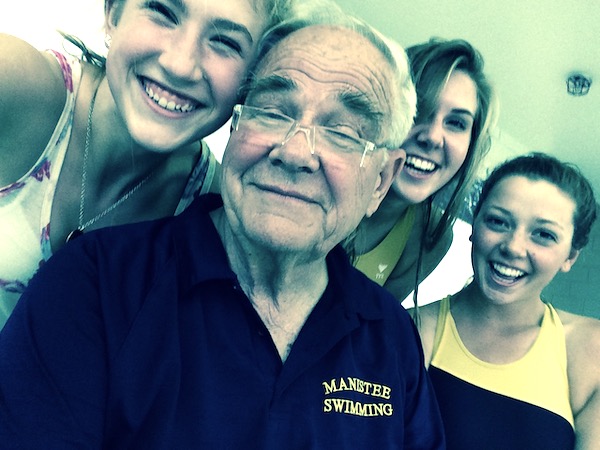 “The superintendent of schools at the time (Robert Olsen) said you build the darn thing, you might as well get some programs started,” Van Fleet recalled. “That was 13 years ago, and I’m still at it.”

At it, Van Fleet continues. He plans to stay with it until he just can’t do it anymore.

“I am still fairly healthy,” he said. “If I can find six people that can carry me out of church, I can think about quitting.”

During his tenure at Manistee, Van Fleet’s teams have dominated the Coastal Conference and produced multiple academic all-state swimmers. The boys team captured the 2020 academic all-state title with a 3.82 team grade point average.

“I am most proud, I think, about our academic progress,” Van Fleet said. “We take great pride in passing some classes.”

Van Fleet is also filled with pride when he reflects on all the swimmers he’s seen go on to become lawyers, doctors, teachers, engineers and coaches.

“I am pleased with the number of kids who have gone on to do some pretty big things in the world off our swimming programs,” he said. “I’d like to think they might have learned lessons about goal planning and sticking to it and hard work and all that stuff.

“That’s what lights me up.”

Van Fleet’s initial high school coaching job was at Madison Heights in 1959. He’s coached at camps all over Michigan, including his first at Burt Lake in 1954. Today he owns and operates a summer swimming camp in Irons, 30 miles southeast of Manistee. He also built it.

Jeff Brunner, a veteran MHSAA official in multiple sports including swimming, and father of former members of the Traverse City high school swimming co-op, is among many singing praises of Van Fleet’s impact on the sport.

“Corey has a wealth of information that he has accumulated in his coaching career,” Brunner said. “If I was a high school swimmer, I’d want to learn all I could from him – swimming for him would be such a unique opportunity.”

“We're humbled to have had Corey as part of our school and community,” he said. “His wealth of experience, knowledge, and relationship building has helped create a foundation of well-being for students and adults alike.

“His enthusiasm for swimming is infectious, and his energy is amazing for anyone regardless of age,” he continued. “It's been truly impressive to observe him connect and inspire students for the many years he's been in Manistee, and realize his impact is generational.”

The Manistee boys swim team starts practice next week. The Chippewas, along with their girls squad, have battled through COVID. The pandemic is one of many changes through which Van Fleet has guided his athletes.

“We’ve seen changes in philosophies in terms of what’s important and what’s not important,” he went on. “Kids have changed, and parents have changed.”

Training methods have been modified the most, along with new multi-lane pools popping up in Michigan, Van Fleet noted.

“Swimming is more technical now,” he said. “The science of swimming has become paramount.

“It is not just going in and kick a few legs and swim a few hundreds and go home — we’ve gone the gamut,” he continued. “It is very specific now every time you want a kid to do something, and now our swimming pools are showplaces – they are magnificent.”