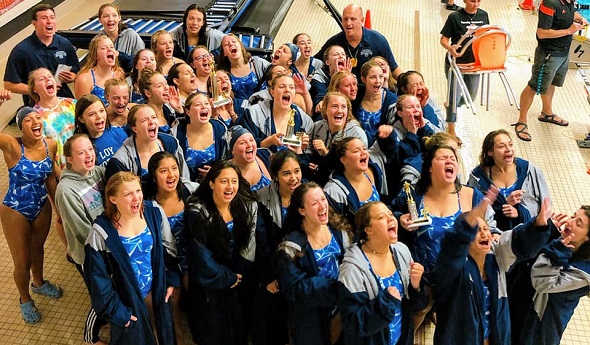 KALAMAZOO — When Paul Mahar was hired to coach at Loy Norrix High School, he had nine returning swimmers on a team of just 14 girls.

That was in 2004, and the program was on the verge of becoming a co-op with Kalamazoo Central High School.

But Mahar turned the girls swimming & diving program around in a “rags to riches” story, said athletic director Andrew Laboe.

Norrix has 45 girls on this year’s team, with two individual and three relay team qualifiers so far for the MHSAA Lower Peninsula Division 2 Finals on Nov. 22-23 at Oakland University.

Four divers – juniors Samantha Vande Pol, Laurel Wolfe, Sofie Santos and freshman Wen Wadsworth – are all headed to Regionals this week hoping to qualify for the Finals as well.

“(Mahar) has built a program through blood, sweat and tears with excitement, building a community education youth program and through the non-stop drumbeat of recruiting within our school,” Laboe said.

The Knights ended the regular season with a 7-2 record, including a win over perennial power Battle Creek Lakeview.

“Beating Lakeview was a big milestone for them,” Laboe said. “(Norrix is) a very young team this year, and we are hoping to build on that in the next years.”

Senior Carly Loken said a key to the team’s success is the girls’ relationships with each other.

“We have a lot of girls who swam club, and we’re all friends,” she said. “Also, (it helps) being able to pull in kids their freshman and sophomore years and welcome them into the group, and (we) really enjoy spending time together.”

Mahar prefers to deflect the attention from himself to the athletes, but his enthusiasm for the program is evident.

“My first few years I just had my upperclassmen pull kids in, just kids recruiting kids,” he said. “The last 10 years or so with me being in the building (as a teacher), I’ve been able to create relationships with kids and bring them out.

“Just siblings coming out and friends bringing friends out, that’s the big part of it.”

Loy Norrix finished third at the Southwestern Michigan Athletic Conference championships over the weekend, not a surprise to sophomore Annika Schnell.

“It’s important that we have fast girls, but we also have swimmers who hold our team together,” she said. “We have a lot of depth.”

One key to Mahar’s success is a community program he started which now includes K-Central. 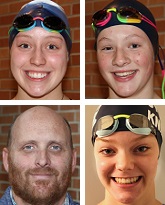 “The first few years it was called Knights United,” he said. “Then we had a great conversation with Kalamazoo Central parents to bring swimming back to the city of Kalamazoo and Kalamazoo Public Schools.

“We sat down and agreed we would come together, so we changed it to Kalamazoo United. We started with 25 boys and girls, and now we’re at about 250 kids year round.”

The program, hosted six months at Norrix and six at Central, includes children as young as 4 years old in the “Learn to Swim” class, and up to 18 years old.

Schnell, who became the first Knight headed to the MHSAA Finals when she qualified in the 50-yard freestyle, started in the community program at age 9 and now works with the younger swimmers.

Over the weekend, she also qualified in the 100 butterfly.

One advantage, she said, is having the same coach when girls transition to the high school team.

“The majority of the kids who are on the team I’ve known since they were in third or fourth grade. So I’ve created a relationship with all these kids who are in the water right now for over a decade, and it’s been really great,” he said.

“Coach Mahar has been my coach ever since I was little, so I kind of grew up with him and I always knew that I wanted to be a part of this environment,” she said.

“I remember one practice when I was little, (high schoolers) came and helped us with strokes, and I really liked that and wanted to be a part of that group.”

Schnell qualified for the Finals last year and, while she did not make it to the second day’s championship and consolation races, she said it was a good learning experience.

“This year, I’m hoping to make one more cut than last year. I didn’t really come in prepared last year, but now I have experience. It’s always good to go with friends.”

Schnell will have a few friends with her this year, with junior Ellie Haase in the 100 backstroke and all three relay teams headed to Oakland so far.

‘No captains, all leaders’

The coach encourages swimmers to be leaders. 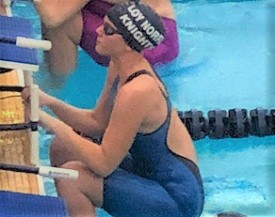 “We decided to take away captains, and we asked the girls to start building better relations with each other and create leaders over there,” Mahar said. “Our motto is ‘No captains, all leaders.’

“That creates an opportunity for a newbie, which we call a first-year kid or a freshman or sophomore, a chance to step up and be a leader in some way. It doesn’t always have to be in the pool. Maybe it’s in the locker room. Maybe it’s in the classroom.”

Mahar, who retired this year from coaching the school’s boys team, said when he was first hired, he had no idea that he would still be at Norrix 15 years later.

“I’m fortunate that I made the decision to stay in Kalamazoo, not only to teach but also coach and raise my family here,” he said. “I have two female swimmers who will be coming up soon, so I’m excited about that.”

Those are his daughters, Grace, an eighth grader, and Lillian, a sixth grader. Both participate in the community feeder program.

“I’m very fortunate that I have so many families, parents, athletes who have stuck with us and built this together, and that’s really the only reason we are as successful as we are today,” he said.