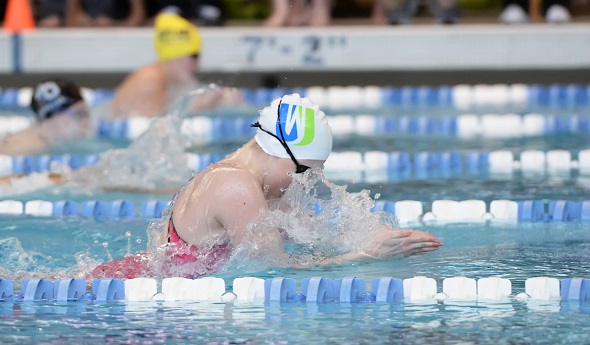 ROCHESTER – The Marlins are back. Back on top.

Farmington Hills Mercy reasserted its status as MHSAA champion by out-swimming the competition at the Lower Peninsula Division 1 Final on Saturday at Oakland University.

“We all worked together on this,” Mercy junior Roxy Griffore said. “We had a really great team, and we worked really hard.”

Marlins coach Shannon Dunworth said the team quietly went about its business all season long, working long every day, knowing what lay ahead and with it all leading to this moment.

“I think all year long we had high expectations, but we don’t talk about it,” he said. “The battle is every day in practice. You don’t do a length without measuring up. Even though this happened so quick, it was three full months of preparing.

“We’re fortunate to have them the few months that we do, and take advantage of all the work they do year round.”

As for starting another streak of MHSAA titles, Dunworth wasn’t too worried about that.

“Every group is unique,” he said. “I never cheapen it with how many in a row. This team only has the chance to win it one time, and they did. And that’s great. Next year will be a whole different ball game.”

Griffore was the Marlins’ lone individual champion on the day, winning the 50-yard freestyle. She also finished fourth in the 100 freestyle.

“She’s a very quiet, unassuming individual,” Dunworth said of the junior nicknamed “Gator.” “She’s an alligator when she gets in the pool. I spend a lot of time working with her, and it’s a big reward for me.”

Griffore also swam on two Mercy relay teams that racked up points, the first-place 200 freestyle relay and the second-place 200 medley relay. In the 200 freestyle, she teamed up with juniors Maddy Loniewski and Alaina Skellett and freshman Kathleen McGee. In the 200 medley, it was senior Elliot Schinella, senior Hannah Knoop, sophomore Ellyse Conn and Griffore. Loniewski, Skellett, McGee and Schinella later teamed up to take fourth in the 400 freestyle relay and wrap up the overall title.

The Marlins needed every point they could get to stay ahead of the competition, including second-place Saline (251 points), third-place Ann Arbor Skyline (177), fourth-place South Lyon (169) and fifth-place Rockford (127).

“We have tremendous respect for everybody here because we know how hard our kids work, and just to get here, you have to be very dedicated and very determined,” Dunworth said. “So you want to beat people you have the utmost respect for. The Skylines, the Salines, the Rockfords, the South Lyons, that makes it worthwhile. There were a lot of fast swims.” 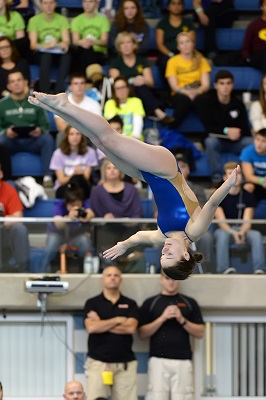 Stevens said she and her teammates worked hard all year to reach this point and was proud to see it pay off.

“I was really happy to see the finish of all them,” Stevens said. “Personally I did a lot of work this season, and it just helped seeing the success of my teammates around me. That helped me work harder. Miranda was there pushing me the whole season to get better, as I was pushing her to get better. The competition was very talented.”

Saline diving coach Alex Gauvin said most of the Hornets’ pressure comes from themselves, not outside competition.

“I’ve never had a harder working group of girls. It shows up and pays off,” he said. “We use that in practice all the time,” he added, referring to competing against each other. “Having that friendly competition on the team (helps) a lot. I couldn’t be happier with the way that they dove today. It’s going to be a good couple of years at Saline.”

Skyline slipped past South Lyon in the final event, the 400 freestyle relay. The teams had been tied at 137 points heading into the finale, which the Eagles won, thanks to the team of freshman Emma Cleason, sophomore Kaelan Oldani, senior Shannon Cowley and sophomore Katie Portz. Cleason, Cowley, Portz and freshman Kate Orringer had earlier teamed up to win the 200 medley relay in record-setting fashion with a meet-best time of 1:44.45. Portz also won the 100 freestyle for Skyline, a program rapidly on the rise after finishing as the runner-up in LP Division 2 last year.

“I continually say I’m the luckiest person I know, because I get great athletes, I get unbelievable parents who allow me to coach and support me when I want to do my job, and not everybody has that luxury. So that’s what really makes a difference here,” Skyline coach Maureen Isaac said. “And these swimmers totally buy in to what we’re doing at Skyline. I ask them to work really hard, and they do, and clearly they get the rewards. And it’s just an amazing group. The karma on this team, and the vibe on this team, is just amazing.”

But Isaac and the Eagles aren’t content yet, hoping to add bigger and better things to their trophy case.

“We’re going to keep working on winning a title. Division 1, it’s so much harder, and we just set the bar and these kids found it. So that’s what’s really exciting, and so now we’re not afraid of that anymore. And so, just to get more and more qualifiers, and for us, it’s all about creating opportunities for more and more kids, and that’s what we want to do.”

Waterford United junior Miranda Tucker turned in one of the Finals’ most impressive performances in preliminaries of the 100 breaststroke, where Friday at Oakland she broke the LP Division 1, overall MHSAA and pool records with a time of 1:01.36. She ended up winning the event Saturday as well as finishing first in the 200 individual medley in 2:00.31.

“The competition helps a lot,” she said. “Everyone works so hard, and I know a lot of them well too. Even in the ready room we’re saying, ‘Good luck; hey you’re doing awesome today,’ but then once that music starts playing, and we start walking out, it’s just completely serious.”

Junior teammate Maddie Wright matched Tucker with a record-setting performance, turning in a time of 53.88 in the 100 butterfly setting LP Division 1, overall MHSAA and pool marks. She also finished first in the 200 freestyle.

“I was definitely really nervous today, this morning. But when I got to the pool, I did my warmup, I did everything I needed to do,” she said. “And when it came to the race, I wanted to win really bad. And I wasn’t going to let anyone take that away from me.”

South Lyon senior Chanel Bonin got in on the record-setting action as well, making her time of 54.16 the new backstroke standard in LP Division 1.

“It was, not just this season, but just putting forth effort all year long, really working at everything that I could, trying my best,” she said. “Last year I finished third in the 100 butterfly, and seventh in the backstroke, so coming out on top was kind of a big deal this year.”

Bonin was proud of her teammates as well, as South Lyon improved on its fifth-place finish from 2012.

“Our team did really well,” she said. “It was very unexpected for us to do what we did today. And everyone had amazing swims left and right. It was really exciting.”

Rounding out the first-place finishes was Northville freshman Laura Westphal, who outpaced the competition in the 500 freestyle.