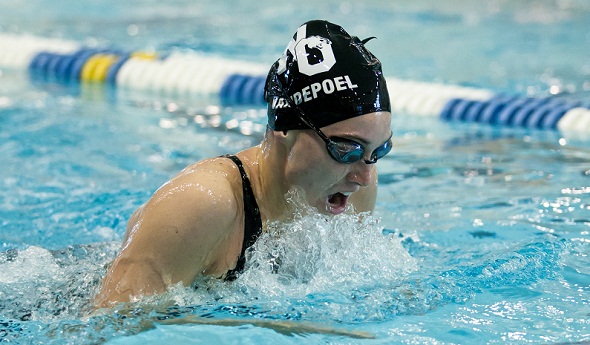 By Alan Babbitt
Special to Second Half

Saturday's breakthrough went far beyond the pool for the Panthers.

The Panthers cruised to a first-place score of 298.5 points in their own backyard — approximately five miles from their high school. They finished 26.5 points ahead of runner-up Farmington Hills Mercy.

“It didn’t really hit me we were champs until they announced our names,” Vande Poel said. “It’s really exciting. I didn’t even know that we were the only ones. It feels super special knowing that in the future people know that if they work hard enough and have their minds set, they can do it.”

Vande Poel and her teammates made history in record-setting fashion.

West Ottawa applied lessons throughout the season the Panthers learned the hard way during a disappointing seventh-place finish in 2011, VanderZwaag and coach Steve Bowyer said.

“I think we knew we needed to work hard this year, and we needed to change some things we did last year that weren’t working for us,” Vande Poel said. “We worked harder. We just wanted to do it. We came here and did that.”

The Panthers won the 200 medley relay in a near meet-record time of 1 minute, 45.14 seconds from Vande Poel, Chelsea Rish, Anna Battistello and Caroline Fender.

They came within two one-hundredths of a second of the Final and school record they set during Friday’s preliminaries.

VanderZwaag, a junior, secured a first-place diving score of 425.45 points on the final dive — a successful back somersault with a 1½ twist.

“I knew I could do it. I just took a deep breath and did it,” VanderZwaag said. “This team means so much to me. I love them all. We just keep working hard this season, trying our hardest.”

The Panthers came in first again in the ninth event. Anna Babinec, Lauren DeShaw, Fender and Elizabeth Fris won the 200 freestyle relay with a school- and pool-record time of 1:35.58.

The performance gave West Ottawa a cushion against expected push from Farmington Hills Mercy in the backstroke, Bowyer said.

“I felt the 200 free, if we could win that relay, we would put ourselves in position to win the meet,” Bowyer said. “We went amazing fast in that relay.”

The Panthers then needed a seventh-place finish in the finale — the 400 freestyle relay — to clinch the team title.

They avoided any nerves and a costly disqualification, instead setting a school record with a second-place effort of 3:30.53 from Babinec, Vande Poel, DeShaw and Fris.

They finished behind only Saline’s American Armstrong-Grant, Melanie Schroeder, Allison Eppinga and Maddy Frost, who won in 3:29.13.

Bowyer, also named Division 1 Coach of the Year by his peers, saw the fruition of a goal that started one year ago.

“I think we learned if you don’t put in the work, you’re not going to be rewarded at the end of the year,” Bowyer said. “We worked hard last year, but quality yards weren’t there. The focus each and every day wasn’t there.

“If you want to have success, you have to make sure you put in the work every day. This year, our seniors came ready to do that.”

Waterford Kettering sophomore Maddie Wright was named Division 1 Swimmer of the Year by the Michigan Interscholastic Swim Coaches Association after winning two events, setting one Division 2 meet record and one pool one.

“I couldn’t be happier with my swims,” Wright said. “It feels amazing. After a long season, it’s a good feeling to see it all paid off.”

Wright established a new Division 2 best in the 100 butterfly by going 54.13 during the finals. She came within 0.15 of a second of the all-division Finals record of Ann Arbor Pioneer’s Margaret Kelly from 2005.

“Support from my teammates helped,” Wright said. “I picked it up a lot when I realized what I had to do to swim fast. (I) just practiced every day.”