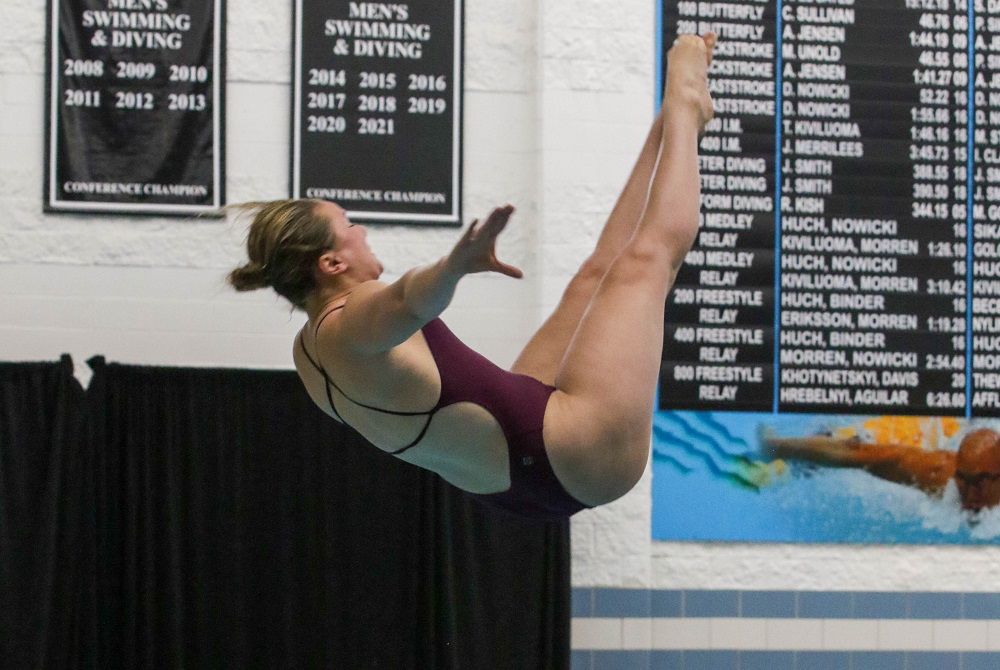 In a sport often dominated by powerhouse programs, we could see new contenders emerge during this weekend’s Lower Peninsula Girls Swimming & Diving Finals.

True, Ann Arbor Pioneer looks tough to beat as it seeks a third-straight championship in Division 1. But even with Birmingham Seaholm pursuing a fourth-straight title in Division 2, it appears Jenison is the team to chase at Calvin University as the Wildcats seek their first Finals team victory in this sport.

In Division 3, the top-two ranked teams have won before – but neither this century. Holland Christian and Milan lead those with championship aspirations.

Competition begins at noon for Friday’s preliminaries and Saturday’s championships. Friday’s action will begin with swimming, with divers taking the pool approximately 3:30 p.m. at all three sites.

A spectator limit of two tickets per Finals qualifier will be in place in Division 2, but all three Finals will be streamed live on MHSAA.tv both days. Click for information on purchasing tickets, plus schedules and qualifiers for all three meets.

Stella Chapman, Ann Arbor Pioneer junior: The top seed in the 200-yard individual medley (2:04.13) and 100 backstroke (56.07) will be looking to add to individual titles won in the backstroke as a freshman and IM as a sophomore. She’s also swam on four relay champions and is part of two top-seeded relays this weekend.

Elizabeth Eichbrecht, West Bloomfield freshman: She’s burst onto the scene this fall and provided plenty of anticipation as she enters her first MHSAA Finals with top seeds in the 200 freestyle (1:48.87) and 500 freestyle (4:54.65).

Lucy Mehraban, Ann Arbor Pioneer senior: After swimming on two championship relays as a freshman, Mehraban could close her high school career with a few more titles as she’s set to swim on two top-seeded relays and enters with top seeds in the 50 freestyle (23.04) and 100 freestyle (50.31).

Emily Roden, Northville senior: She won the 100 butterfly as a freshman and was second in that race and the IM last season. She enters this weekend with the top seed in the butterfly (55.17) and fourth seed in the 200 freestyle (1:51.86).

Ann Arbor Pioneer 200 medley relay: Chapman is likely to be joined by sophomore Ursula Ott, senior Sophia Guo and freshman Kate Van Ryn as they pursue the LPD1 Finals record of 1:42.40. Pioneer has a seed time of 1:43.52.

Alice English, Saline senior: After finishing second at last year’s Final, less than 19 points off the lead, English will pursue her first championship coming off the highest Regional score (426.90) in Division 1.

Grace Albrecht, Jenison junior: She’s won the 50 freestyle twice (including last season in a tie) and also was the 100 free runner-up last fall. She enters this weekend seeded first in the 50 (23.31) and second in the 100 backstroke (54.26) and also likely will swim on two top-seeded relays.

Lily Cleason, Ann Arbor Skyline senior: The reigning backstroke champion is seeded first in that race again (53:00) and second in the 200 freestyle (1:50.77) after finishing sixth a year ago.

Samantha Clifford, Birmingham Seaholm senior: She swam on her fourth and fifth champion relays last fall and also won her first individual title in the 100 free while finishing second in the 200. She’s seeded fourth in the 200 free (1:53.32) this weekend and second in the 100 (51.76).

Rhian Russell, Rochester Adams senior: She’s seeded first in the 100 butterfly (54.95) by more than a second and fourth in the backstroke (56.41). She previously was part of Adams’ 200 medley championship relay in 2020.

Sophia Umstead, Jenison sophomore: She’s also swimming in her first Finals and with an opportunity to make a historic impact with her top seed times in the IM (1:59.01) and 100 breaststroke (1:01.96) faster than the current Division 2 Finals records.

Jenison 200 medley relay: The expected combination of Albrecht, her freshman sister Emma and the Umstead sisters enters with a top seed time of 1:42.81, which is 1.8 seconds off the Division 2 record but would be the second-fastest time on the list.

Lily Witte, Dexter senior: She’s twice set the Division 2 Finals record for diving and won the event three times, with her 503.55 last season just under six points shy of the all-Finals record. She scored 513.35 to win her Regional by nearly 90 points.

Caroline Li, Okemos senior: Like Witte, she’s one of the nation’s top high school divers – but has finished second to Witte all of her first three seasons. She also won her Regional, with her 463.30 nearly 42 points better than the field.

Kiera Danitz, Ogemaw Heights senior: She has a chance to sprint to multiple championships as she enters with the top seed in the 50 free (24.15) and second seed in the 100 (53.41).

Julijana Jelic, Bloomfield Hills Cranbrook Kingswood junior: After finishing fourth in both the IM and backstroke last season, Jelic is the top seed in the backstroke (59.60) and fifth in the IM (2:15.14).

Scarlet Maison, Standish-Sterling sophomore: She left her first Finals last season with a championship in the IM and 11th place in the backstroke, and she returns as the top seed in the IM (2:08.76) and second seed in the breaststroke (1:07.56).

Lauren McNamara, Flat Rock junior: The reigning champion in the butterfly is seeded first in that event (56.46), and second in the IM (2:11.46) after finishing sixth in that race last season.

Alicia Viaches, Haslett junior: Viaches posted the highest Regional score in Division 3 (367.75), more than 45 points higher than the rest of the competitors at her site.

Kaitlyn Molnar, Grosse Ile junior: She should build significantly on last year’s 10th-place Finals finish after winning her Regional by more than 60 points with a 366.10.