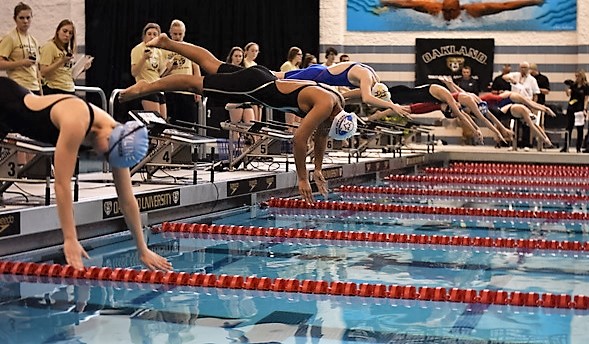 A change in division by one state power could change things up significantly at two of this weekend’s Lower Peninsula Girls Swimming & Diving Finals.

Regular favorites are expected to contend again in Division 1 after Rockford emerged to claim its first title last year. But Division 2 will welcome East Grand Rapids after the Pioneers posted one of the all-time impressive wins in Division 3 last fall. And a number of contenders are looking to return to the podium in Division 3 after EGR won three of the last four titles.

Prelims are Friday, and championship competition is Saturday. Below is a look at team contenders and top individuals to watch at all three Finals. All three will be broadcast live on MHSAA.tv and covered with stories posted to Second Half later Saturday evening. Click for full meet information including times and event orders.

Saline and Mercy are expected to push each other for the top spot – Saline is going for its first title since 2014 and Mercy for its first since 2013, although the Marlins have finished among the top two five of the last six seasons. Saline has 14 swimmers/relays seeded among the top 16 plus two divers competing – and among those 14 on the swim side are six top seeds, including two in the relays. Mercy doesn’t have a top seed, but does have 14 swimmers seeded to score plus three competing divers. Rockford has only 16 athletes/relays total, but 12 are seeded to score swim points and its diver was third at her Regional.

Johanna Jorgenson, Saline sophomore – After taking fifth in both the 50 and 100 freestyles last season, Jorgenson is seeded first in both at 23.05 and 50.30 seconds, respectively. She also could swim on the top-seeded 200 and 400 freestyle relays.

Katie Minnich, Farmington Hills Mercy senior – Minnich is looking to cap her career with a fourth straight backstroke championship; she is seeded second to Chung in that race at 55:04 and also third in the IM at 2:05.02

Georgia Mosher, Ann Arbor Skyline senior – Mosher has won two straight 500 freestyle championships and enters seeded eighth (5:06.08) in that race but fourth in the breaststroke (1:04.62). She also could swim on the top-seeded medley relay.

Lizzy Spears, Saline senior – After finishing third in the IM and eighth in the breaststroke last fall, Spears has the top seed in the IM (2:01.37) and third in the butterfly (55.41). She also is an option to swim on both top-seeded freestyle relays.

Ashley Turak, Farmington/Harrison junior – After entering last season’s Final with top-two seeds in both freestyle sprints, Turak finished second in the 50 and fourth in the 100. She enters this weekend in a similar spot – second-seeded in the 50 (23.15) and the 100 (50.52).

Claire Tuttle, Hudsonville sophomore – Tuttle finished third in the breaststroke as a freshman and carries the top seed in that race this time at 1:02.49. She’ll also swim the 100 freestyle.

Saline 200 freestyle relay – The Hornets are seeded first with a time of 1:35.19, identical to the time they swam last season that ranks fourth in LPD1 Finals history and is eight tenths of a second off the meet record.

Zain Smith, Ann Arbor Skyline junior – Smith won her Diving Regional last week with a score of 436.95, the third-highest Regional score in Division 1, and is the top returning finisher from last year’s Final after coming in second to graduated champion Camryn McPherson of Saline.

Last season’s LP Division 3 champion East Grand Rapids is back in Division 2, where it finished runner-up to Dexter in 2015. The Pioneers’ return didn’t affect their ability to qualify – EGR has all three relays and 16 individuals seeded among the top 16 of their events, with two top seeds, plus four divers competing. Without EGR in the mix last year, Seaholm finished 37.5 points ahead of the Dreadnaughts. Dexter has 12 individuals and all three relays seeded to score, plus two divers, while Seaholm has 11 individuals and three relays seeded to score and two divers as well.

Royal Oak senior Julia Boswell – Boswell is seeded to finish her career with a second championship but in a different race, carrying the top seed in the 200 freestyle (2:05.24) by more than two seconds after winning the 500 a year ago. She is seeded second in the 500 (4:58.91), only 42 hundredths of a second from topping that list too. She also took a 10th in the IM last year.

Grand Rapids Forest Hills Central senior Felicity Buchmaier – The reigning champion in the backstroke and butterfly has won three individual titles total over the last two seasons. This weekend, she’s seeded second in the butterfly (56.79) and third in the backstroke (57.75).

East Grand Rapids senior Ileah Doctor – The reigning Division 3 champion in the 50 and breaststroke also is seeded first at this meet in the 50 (23.12) and second in the 100 freestyle (51.87). She also could swim on the top-seeded 200 freestyle relay and second-seeded medley relay.

Birmingham Seaholm senior Haley Dolan – Dolan won the 50 in 2016 and also swam on two championship relays. She’s seeded fourth in the 50 (24.05), 15th in the 100 and is an option on all three relays including the top-seeded medley.

Midland Dow sophomore Claire Newman – After finishing second in both the 50 and 100 freestyles as a freshman, Newman is expected to break through with at least one title. She’s seeded second in the 50 (23.69) behind Doctor and first in the 100 (51.44) ahead of her, plus could swim on the second-seeded 400 freestyle relay.

Dexter senior Annette Schultz – With a combined four individual and two relay championships over the last two seasons, Schultz enters as one of the anticipated stars again this weekend. She’s fourth-seeded in the 100 (52.49) and top-seeded in the 200 (1:52.73) freestyles as she attempts to win both for the third straight season.

Milan senior Madelyn Cislo – She’s seeded to repeat as the champion in the IM, entering with a time of 2:05.95 that’s more than five seconds better than anyone else’s in Division 3. Cislo also is seeded second in the butterfly after finishing third last season.

South Haven freshman Ellie Frost – Arguably the fastest of a standout group of freshmen as this meet, Frost is seeded first in the 100 freestyle (53.21) and second in the 50 (24.21).

Grand Rapids Catholic Central senior Susan LaGrand – LaGrand finished second in both the butterfly and IM last season after winning both as a sophomore. LaGrand and Hensler both broke LaGrand’s meet record in the butterfly last year; LaGrand will try to finish back on top in that race and enters with the third seed (58.18) and the top seed in the backstroke (57.55).

St. Clair senior Molly Likins – After finishing second in the breaststroke and qualifying in the 50 last year, Likins will swim both races again and is seeded first in the breaststroke (1:05.26) by nearly three seconds. She also could swim on the second-seeded medley relay.

Bloomfield Hills Cranbrook Kingswood freshman Gwen Woodbury – Another standout freshman, Woodbury is seeded third in the 200 freestyle (1:54.85) and second in the 100 (53.31) only a tenth of a second behind Frost. She also could swim on any of relays including two seeded second.

Milan junior Mackenzie Crawford – The reigning diving champion won last year’s Final by more than 62 points, and her 431.25 at last week’s Regional was 64.5 points ahead of her field and the second highest in the division.

Wayland senior Allyson Schafer – She finished second in diving last season to Crawford, but posted the highest Regional score in the division last week at 449.15.