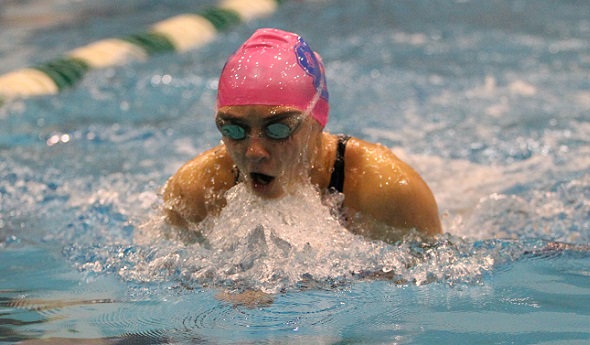 A total of 17 past MHSAA individual champions will lead the charge into this weekend's Lower Peninsula Girls Swimming & Diving Finals, which begin with preliminaries at noon today.

Among those reigning winners, 10 seniors are hoping to finish by climbing the awards podium one more time – and they and many more will attempt to do so with their teammates as well.

Below is a look at team contenders and top individuals to watch at all three Finals. All three will be broadcast live on MHSAA.tv and covered with stories posted to Second Half later Saturday evening. Click for full meet information including times and event orders.

Farmington Hills Mercy finished first or second every season from 2011-14 before falling back to third place last fall, but could be the favorite as it seeks a ninth MHSAA Finals championship. The Marlins have 12 individual swim entries and two relays seeded in scoring range among the top 16 in their respective events, plus a diver competing. Reigning champion Ann Arbor Skyline has similar numbers going for it – 11 individuals and three relays in scoring position (including a top seed) and a diver. And Saline should also be in the mix again after finishing second last season, 2013 and 2011 and winning in 2009, 2010 and 2014. The Hornets have the reigning champion diver plus all three relays and seven individuals seeded among the top 16 – and four of those swim seeds are ranked first in their events.

Emma Cleason, Ann Arbor Skyline senior – Last season’s champion in the 200-yard individual medley (and fourth-place finisher in the 100 butterfly) enters this weekend seeded sixth in the IM (2:06.13) and fourth in the butterfly (56.13).

Sydney McDowell, Rockford senior – The reigning breaststroke champion (and 12th-place finisher in the IM) will look for a strong finish seeded fifth in the breaststroke (1:04.43), eighth in the IM (2:07.36) and while competing as part of that top-ranked 200 medley relay with Kraus.

Nicole Pape, Rochester Adams senior – The Division 2 IM champion in 2014, she finished second in that race and the butterfly last season in Division 2 as well and is seeded third in the IM (2:04.98) and sixth in the breaststroke (1:05.15) this time in Division 1.

Erin Szara, Northville senior – She finished 11th in the breaststroke last season, but is seeded first in that event (1:03.57) with a time three seconds faster than what she raced at the 2015 Final; she’ll also swim the IM.

Camryn McPherson, Saline senior – McPherson moved up from runner-up in 2014 to diving champion in 2015 and will seek a repeat after posting the best Regional score in Division 1 by 28 points.

Haley Dolan, Birmingham Seaholm junior – Dolan swam on two top-three relays last season but didn’t make the championship heats in her individual event, the 50 free. But she’s now the top seed in the 50 (24.25) with a time more than a half-second better than what she swam at the 2015 Final, and will also swim the 100 freestyle (54.62) and on all three relays including the top-seeded 200 freestyle (1:38.25).

Gabby Rosely, Walled Lake Northern junior – Rosely finished fourth in both the backstroke and IM last season and is seeded to improve as third in the IM (2:09.46) and first in the backstroke (55.87).

Allie Russell, Birmingham Seaholm senior – Russell finished fifth in the IM and just missed winning the breaststroke, coming in 17 hundredths of a second out of first place to finish second last season. She’s seeded sixth in the IM (2:11.06) and first in the breaststroke (1:05) this time.

Anna Hansen, Grand Rapids Forest Hills Central sophomore – Two-time reigning diving champion Erin Neely has had to miss her final high school season with an injury, but teammate Hansen could keep the championship with the Rangers after posting the highest Regional score in Division 2 (416.65).

Division 3 has a different look this fall with East Grand Rapids and Bloomfield Hills Marian back in the mix after finishing second and fourth, respectively, in Division 2 in 2015. The Pioneers won Division 3 in 2013 and 2014 and come in with all three relays and an incredible 26 individual seeds among the top 16 in their events – including two top seeds – plus five divers. Marian is right there too with two top-seeded relays and the third with a third seed, plus 19 individual top-16 seeds including four more tops in those events. Pushing for another strong finish is reigning champion Grand Rapids Catholic Central; all three relays are seeded to score, as are seven individual entries (one top seed).

Gabby Higgins, East Grand Rapids senior – After winning both the 100 and 50 in Division 3 as a sophomore, Higgins finished third in both races in Division 2 last season while also helping winning 200 and 400 relays. Back in Division 3 again, she’s seeded fourth in the 50 (24.10), third in the 100 (52.82) and will swim on both relays, which are both seeded second.

Susan LaGrand, Grand Rapids Catholic Central junior – LaGrand won the butterfly as a freshman and then both the butterfly and IM and swam on the first-place 400 freestyle last season; she's seeded to repeat in the IM (2:09.81) and sixth in the butterfly (58.77).

Karlee Marsh, Tecumseh senior – After winning the 100 and finishing second in the 200 freestyle last season, Marsh is seeded fourth in both (53.59 and 1:57.63) and will swim on two top-seven relays.

Meghan Peel, Spring Lake senior – Peel finished fourth in both the 100 freestyle and backstroke last season but enters this weekend seeded first in the butterfly (57.84) as well as the backstroke (58.40).

Mackenzie Crawford, Milan sophomore – Crawford posted the top Division 3 Regional diving score by 19 points and finished 29.45 ahead of the field at her event.