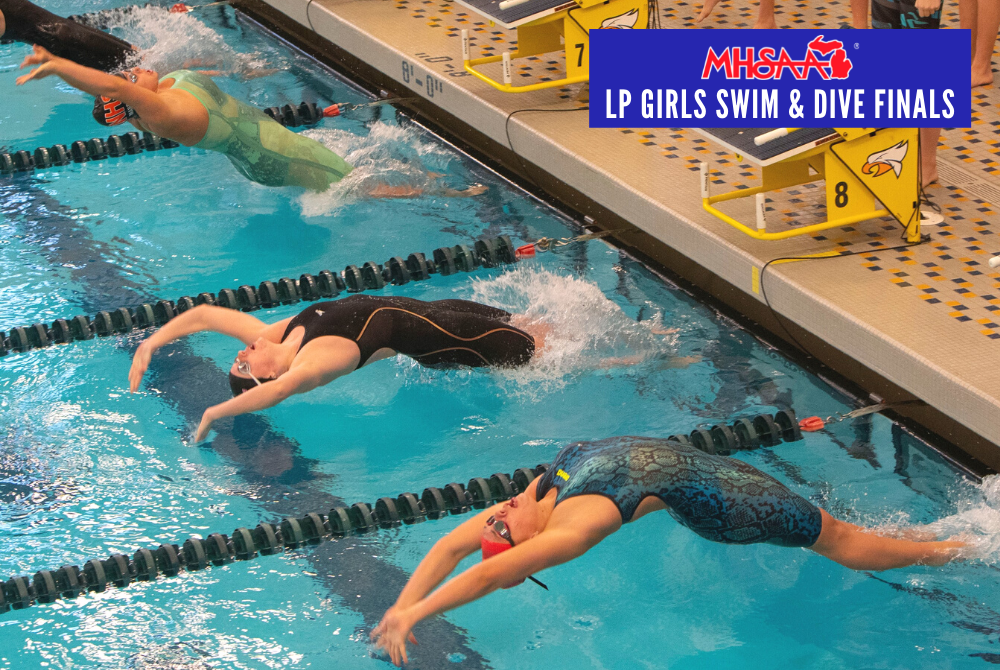 Ann Arbor Pioneer in Division 1, Birmingham Seaholm in Division 2 and East Grand Rapids in Division 3 will enter Friday’s preliminaries with large groups of contenders seeded among the top 16 in their respective events.

But one of the best parts of this weekend’s meets is the opportunity that provides – placers up to 16th score points, and hundreds will have that opportunity. Among returning event champions and this weekend’s top-seeded individuals alone, 28 schools are represented – with many more likely to celebrate one or more placers climbing the podium.

Competition begins at noon for Friday’s preliminaries and Saturday’s championships. Friday’s action will begin with swimming, with divers taking the pool approximately 3 p.m. at all three sites.

Spectator limits – two tickets per Finals qualifier – will be in place in Divisions 1 and 3, but all three Finals will be streamed live on MHSAA.tv both days with an announcer calling Saturday’s action. Click for lineups and seed times for all three meets.

Stella Chapman, Ann Arbor Pioneer junior: The reigning champion in the 100-yard backstroke also took fourth in the 200 individual medley last season and swam on the winning 400 freestyle relay. She seeded second in the backstroke (55.84), fourth in the IM (2:07.64) and likely will swim on two top-seeded relays.

Lily Cramer, Ann Arbor Pioneer senior: She could be in line for at least one individual championship after swimming on two winning relays both last season and in 2019, and coming in fifth in the IM and eighth in the 100 breaststroke as a junior. She seeded first in the 200 freestyle (1:48.50) and second in the breaststroke (1:02.16) and is likely to swim on two top-seeded relays as well.

Brady Kendall, Plymouth senior: The reigning champion in the 50 freestyle and 100 butterfly is seeded first in both races with times of 23 seconds and 54.02, respectively.

Emily Roden, Northville junior: She won the butterfly as a freshman and then finished fourth in that race and third in the 200 freestyle last season. She returns as the top seed in the IM (2:04.43) and second in the butterfly (55.11).

McKenzie Siroky, Livonia Stevenson junior: The reigning champion in the breaststroke is the top seed in that race (1:00.86) and second-seeded in the 50 (23.04), just four hundredths of a second outside the top spot in the latter race.

Vivian VanRenterghem, Ann Arbor Pioneer senior: An individual champion in the 200 free and winner as part of the 400 free relay the last two seasons, VanRenterghem is likely to swim on two top-seeded relays and is seeded fifth in the 200 free (1:53.22) and sixth in the 100 (51.96). She also was 10th in the backstroke as a junior.

Ann Arbor Pioneer 200 medley relay: All three Pioneer relays have posted seed times that would place them among the fastest in LPD1 history in those respective races. But a medley relay likely made up of Chapman, seniors Amelia Weyhing and Holly Pringle and junior Sophia Guo might have the best chance at chasing a record. Their seed time of 1:43.57 would fall in fifth all-time in LPD1, with the record 1:42.40.

Megan Jolly, Rockford sophomore: Jolly scored a 454.05 at her Regional at Hudsonville to win by just under 118 points. Her score also was the best from any of the Division 1 Regionals by 11 points.

Grace Albrecht, Jenison sophomore: She made her Finals debut with a win in the 50 and sixth place in the 100 freestyle, and will return seeded second in both races in 23.76 and 52.50 seconds, respectively.

Angelina Baker, Portland Northern senior: The reigning champion in the 500 is second-seeded this time but only 61 hundredths of a second off the top at 4:59.90. She’s also seeded seventh in the butterfly (57.67) after finishing fourth in that race last season.

Lily Cleason, Ann Arbor Skyline junior: She was runner-up in the backstroke and seventh in the 200 free as a sophomore, but is seeded first in both this weekend in 55.22 and 1:51.75, respectively.

Samantha Clifford, Birmingham Seaholm junior: She piled plenty of points toward the team title last season swimming on two winning relays and finishing second in the 100 free and third in the 200. She’s been part of three relay champs total over her first two seasons and could add an individual title seeded first in 100 (52.25) and second in the 200 (1:52.51).

Tess Heavner, Fenton freshman: She could be the next freshman Finals champ, entering seeded first in the breaststroke (1:03.91), second in the IM (2:05.85) and slated to swim on the top-seeded 200 medley relay.

Claire Kozma, Ann Arbor Skyline senior: A past placer at the LPD1 Finals, she enters her final meet for Skyline as the top seed in the 50 (23.64) and sixth in the butterfly (57.47).

Gracie Olsen, Fenton senior: She will be looking to finish her Fenton career with a few more championships to go with the four she’s earned over the last three seasons. Olsen has won the butterfly the last two Finals and is seeded first at 55.25. She’s also seeded first in the IM (2:02.85) after winning that race as a freshman. She won the 200 free her sophomore season before finishing runner-up in that race as a junior.

Hannah Williams, Portage Northern junior: A multi-event champion as a sophomore could add to her titles in the 200 free and breaststroke. She’s seeded second in the breaststroke (1:04.32) and 12th in the 200 this time.

Caroline Li, Okemos junior: She finished diving runner-up last season and as a freshman, and enters this weekend having posted the second-highest Division 2 Regional score of 463.05.

Lily Witte, Dexter junior: The two-time champion in Division 2 posted the highest Regional score last week of 472.25 and also will be swimming the 50 and potentially on the 200 free relay.

Scarlet Maison, Standish-Sterling freshman: She’ll make her Finals debut in the IM and breaststroke and is top-seeded in the former (2:09.07) and third-seeded in the latter (1:07.02).

Ginger McMahon, Grosse Pointe Woods University Liggett senior: The breaststroke champion as both a freshman and junior, and runner-up in the IM last season as well, she enters this weekend top-seeded in the breaststroke (1:04.21) and seventh in the butterfly (1:00.27).

Riley Nugent, Plainwell senior: She will swim for a rare fourth championship in the same race after winning the 500 freestyle her first three seasons. She’s seeded second in that race (5:11.35) and eighth in the 200 free (1:58.56) after finishing third in the latter last season.

Julia Waechter, Bloomfield Hills Marian senior: After climbing the podium with her 200 medley teammates as a freshman, she will have multiple opportunities to finish with individual titles. Waechter is seeded first in the 50 (23.64) and 100 (51.40) and will swim on the top-seeded 200 free relay and second-seeded 400 free relay. She was third in the 50 and fourth in the 100 last season.

Abigail Sullivan, Otsego senior: She was third at the Hamilton Regional with a 408.65, but won last season’s Finals championship by nearly 110 points with a 455.50.