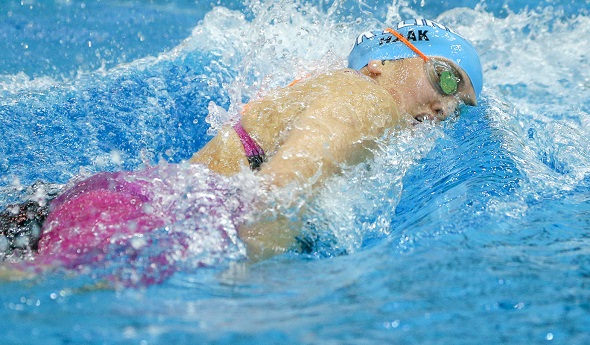 This weekend’s Lower Peninsula Girls Swimming & Diving Finals will welcome a handful of reigning title winners and even a few record holders from past championship meets. As is often true, the team races will feature annual powers among the forecasted contenders.

But if there’s a more intriguing common theme connecting all three Finals, it’s the large group of individual contenders who have been on the verge of reaching the podium’s top step – and will have their best opportunities yet to finish the climb for the first time.

The Division 1 Final will be hosted by Holland Aquatic Center, while Divisions 2 and 3 both will be competed at Oakland University. Preliminaries are Friday and Finals are Saturday, and all three Finals will be streamed live and can be watched with subscription on MHSAA.TV. Division 1 competition begins at noon both days, while Division 3 begins at 10 a.m. Friday and Saturday and Division 2 begins at 5 p.m. both days. Click for lineups and seed times for all three meets.

Kathryn Ackerman, Grand Haven senior: The three-time Finals champion is looking to finish with at least two more individual titles while also swimming on two relays. She’s the top seed in the 200-yard individual medley (2:01.65) after winning that race the last two years and swimming the all-Finals record (1:57.25) in 2018. She’s also the fourth seed in the 100 backstroke (57.22); last year she also swam and won the butterfly.

Greta Gidley, Farmington Hills Mercy junior: As a sophomore, Gidley finished sixth in the 100 freestyle, 16th in the 200 free and swam on two placing relays. She could take things up a notch or two entering as the top seed in the 100 (51.02) and the second seed in the IM (2:06.06) while again expecting to swim on two contending relays.

Amelia Hayes, Saline sophomore: Hayes is the top seed in the backstroke (56.26) after finishing third in that race as a freshman, and 12th in the IM after just missing the final heats last year. She did swim on two top-three relays at the 2018 Final, and her two relays this time are both seeded sixth or higher.

Brady Kendall, Plymouth sophomore: Kendall was another standout freshman a year ago, finishing third in the 50 and fifth in the butterfly and swimming on two consolation relays. She’s seeded second in the 50 (23.42) and first in the butterfly (54.53) this weekend, her latter time eight tenths of a second off the all-Finals record swam in 2017.

Claire Tuttle, Hudsonville senior: Tuttle also is swimming for a three-peat after winning the breaststroke the last two seasons. She’s seeded first in that race (1:01.55), just under a second off the all-Finals record time swam in 2014. Tuttle also is seeded first in the 50 (23.34) after finishing fourth in the 100 last year, and is expected to also swim on two top-four relays.

Rockford 200 medley relay: Seniors Masy Folcik and Rachel Gamm, junior Sara Kraus and sophomore Ashley Lund enter with a top seed time of 1:43.84 and could make a run at the LPD1 Finals record of 1:43.10 swam in 2016. Kraus, Folcik, Lund and then-senior Morgan Kraus won the race last season in 1:43.72.

Annie Costello, Ann Arbor Huron junior: Costello finished fourth in diving at the Final as a freshman and runner-up a year ago, less than eight points off the lead. Her 431.40 winning score was more than 27 points higher than anyone’s in LPD1 at any of the three qualifying meets last week.

Seaholm missed out on a second championship in three seasons last fall by 30 points, but enters this weekend the favorite with all three relays seeded second in their races and 16 more individual seeds among the top 16 in those respective events. Groves hasn’t finished among the top two at a Final since winning four straight Division 2 titles from 2003-06, but this could be the year for serious contention again. Groves has all three relays and seven individuals seeded to score, plus three divers including a 2018 placer. Grosse Pointe South is seeking its first top-two finish after missing by six points last season while placing third. The Blue Devils could be a force for the next few years; this weekend they bring three relays and 12 individuals seeded to score, plus two divers, and nearly all of their contenders are underclassmen.

Sage Gettings, Holland senior: After finishing fourth in the 50 and third in the butterfly a year ago, Gettings is seeded first in the butterfly (56.66) and also will swim the 100. She’s also part of two top-11 seeded relays.

Madeline Greaves, Farmington junior: Greaves finished third in both the IM and butterfly in Division 1 last season as part of the Harrison/Farmington co-op. She’s seeded first in both of her races this weekend, but a different combination – the IM (2:05.38) and 500 (5:00.26).

Claire Newman, Midland Dow senior: The Chargers’ standout will look to add a few more titles to last season’s championships won in the 50 and 100 freestyles. She’s seeded first in both races (23.00 and 50.40, respectively), with her 100 time 81 hundredths of a second off the meet record swam in 2017. She’s also part of top-seeded 200 and 400 freestyle relays.

Charlotte Schultz, Dexter junior: After swimming to a fifth place in the 500, sixth in the 200 free and on two scoring relays last season, Schultz is seeded first in the backstroke (58.81) and also sixth in the 200 (1:55.51). She’ll also swim on two top-seven seeded relays.

Hannah Williams, Portage Northern freshman: Williams enters her first MHSAA Final as the top seed in the 200 free (1:51.21) by more than a second. She’s also seeded ninth in the 100 free (53.62) and will swim as part of two top-six seeded relays.

Kamila Podsiadlo, Walled Lake Western junior: Podsiadlo rose from sixth as a freshman to champion last season, winning the title by more than 16 points. She finished second at her Regional to Dexter’s Lily Witte (see below).

Lily Witte, Dexter freshman: Witte has won five junior national championships and earned fourth and sixth places at the 2019 Junior Pan American Championships. Her qualifying meet score last week of 467.90 was more than 25 points higher than anyone else’s in Division 2.

Justine Murdock, Bloomfield Hills Cranbrook Kingswood junior: After winning the backstroke championship a year ago, she’s seeded first in that race (57.58). She’s also seeded second in the IM (2:10.05) after finishing fifth last season, and is part of top-seeded 200 medley and 400 freestyle relays.

Mary Snyder, Bloomfield Hills Marian sophomore: Snyder started her high school Finals career by finishing fourth in the breaststroke, eighth in the IM and as part of two scoring relays including the champion in the 200 medley. She’s seeded first in the IM (2:09.87), second in the breaststroke (1:06.86) and will swim on two second-seeded relays.

Emily Solarski, Tecumseh senior: Solarski will look for a strong finish to her high school career seeded first in the butterfly (56.89) and also swimming the 50 and as part of two top-five seeded relays.

Gwenyth Woodbury, Bloomfield Hills Cranbrook Kingswood junior: She finished second in both the 100 and 200 freestyles last year but won both races as a freshman. She’s seeded second in the butterfly (57.18) and 200 free (1:53.67) this weekend and will swim as part of two top-three seeded relays including the favorite in the 400.

Rayah Blood, Hamilton junior: Blood moved up from third as a freshman to second last season, and her 446.20 score to win her diving qualifier last week bested the entire Division 3 field by nearly 18 points.