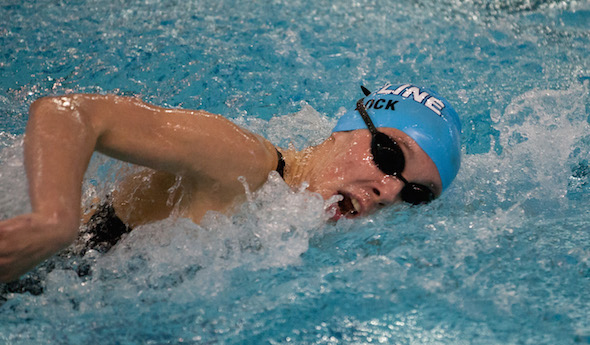 By Butch Harmon
Second Half editor

HOLLAND – After coming in a close second at last year’s Lower Peninsula Division 2 girls swimming and diving championships at the Holland Aquatic Center, the Ann Arbor Skyline girls returned to the same pool this year and came away with some different results.

Moving back into Division 1, Skyline won the first-place trophy as it held off Saline in a tight battle that was close throughout.

“Last year it came down to the last event,” said Skyline coach Maureen Isaac. “We’ve been runner-ups a couple of times, and it’s very frustrating.  We were here last year at this pool, and to come back this year and do it here means a lot.”

Skyline’s victory took a total-team effort and was won over the two days of the event. Work that the Eagles did on Friday paid off Saturday, as Skyline set up the scoring opportunities to get the win.

“We moved some kids around on different relay teams Friday,” Isaac said. “We took some chances, and it paid off. We had a great group of girls and they are wonderful as a team. It might sound cheesy, but it’s true; they just feed off each other. ”

It also helped that Skyline had senior Katie Portz to rely on. A senior who has committed to swim collegiately at Texas A&M, Portz was named the swimmer of the meet by the coaches association for her performance. Portz won a pair of individual titles and was also part of two Skyline relay teams that captured championships.

“This is just an incredible feeling,” Portz said. “It feels so good and I’m so happy for all of my teammates. We took it to a new level as a team this year.”

Portz played a big role in helping the team do so. She took first place in the 100-yard freestyle in a new LP Division 1 meet record time of 49.34, breaking her previous record of 50.23 set two years ago.

“It felt great winning swimmer of the meet, but the team title means so much more,” Portz said. “Winning the team state is a great feeling. All the hard work that we put into this has paid off.”

Portz’s coach was especially happy that Skyline was able to capture the elusive MHSAA title this season for her standout senior.

“I really wanted us to do this for Katie Portz,” Isaac said. “She has been such an important part of this program both in the pool and out of the pool. It was important for us to do this before her career was done.”

In the 200 freestyle relay, Portz teamed up with sophomore Maddie McAdams, sophomore Emily Lock and senior Kaelan Oldani to take first place in a time of 1:35.67.

Skyline cemented the win as it also captured the final event of the meet, the 400 freestyle relay. Portz anchored the team that included junior Emma Cleason, Lock and sophomore Georgia Mosher that turned in a winning time of 3:24.56.

Skyline also had two other individual champions crowned. Cleason took first place in the 200 individual medley in a time of 2:01.51, while Mosher claimed the 500-yard freestyle in a time of 4:54.65.

“Last year I feel I didn’t focus as much,’ McPherson said. “This year I felt like I had a lot better focus. I thought I had some real good dives. I was also more focused to help my team as we needed all the points we could get.”

Sophomore Katie Minnich led the way for third-place Mercy as she repeated in the 100 backstroke in a time of 54.67. 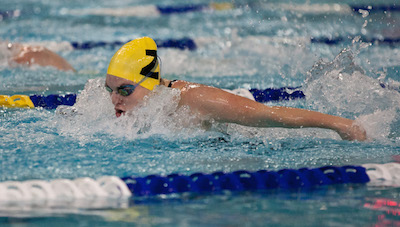 “Winning it a second time is real special,” Minnich said. “I was confident that I could do it. There was pressure on me to win it again, but I like the pressure. There is always pressure and if there is not any pressure, it’s not worth doing.”

Minnich was also a member of Mercy’s 200 medley relay team that also won. She swam the first leg and was followed by junior Allison Lobbia, junior Alaina Skellett and freshman Annette Dombkowski as they turned in a winning time of 1:44.44.

Grand Blanc junior Emma Curtis was another repeat champion. Curtis repeated in the 50-yard freestyle in a time of 23.07, a new personal record.

“It was a lot more exciting this year,” Curtis said. “I wanted to go 22 (seconds) and I just missed it by a few hundredths of a second. I felt a lot better this year and felt a lot less stress. I want to come back next year and win it as a senior.”

After finishing second at Finals the past three years, Zeeland senior Morgan Bullock broke through to the top step of the victory stand. She won the 100-yard butterfly in 54.42 seconds in front of her hometown fans.

“I’ve been runner-up in everything at state since my freshman year,” said Bullock, who will swim at the University of West Virginia. “This is my senior year and I’ve worked real hard for this. I just wanted to go out and do the best I could. I liked that I had a chance to win it close to home. A lot more of my teammates and friends and family members were able to see me win it.”

Rockford, the fourth-place team, was paced by junior Sydney McDowell, who won the 100-yard breaststroke in a time of 1:03.84.