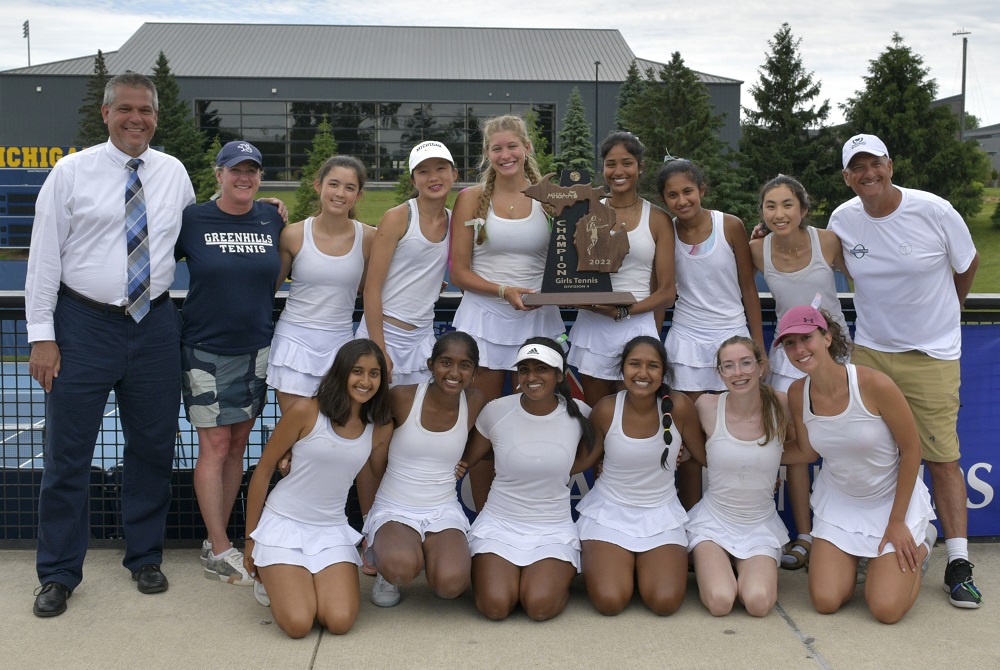 “The way I put it, I’ve been gestating this team for four years,” he said. “I’ve not slept a lot the past couple of months, because I knew what we could do, but we had a couple kids come down with COVID, we had a broken foot, a rolled ankle. We had a kid who had a upset tummy. There’s always something, and every team has the same thing. So the job of a coach is to turn variables into constants.”

That he did. Greenhills had six flights reach Saturday’s finals at University of Michigan, four of them finishing as champions, on a team that had a near-total turnover in its singles lineup in 2022. Among the changes: Last year’s top singles players, seniors Georgie Branch and Rukmini Nallamothu, moved to No. 1 doubles.

They were champions in their flight this weekend, as were Shangyang Xia (No. 2 singles), Sophie Chen (No. 3 singles) and the No. 4 doubles team of Sabeen Malick and Meera Tewari. 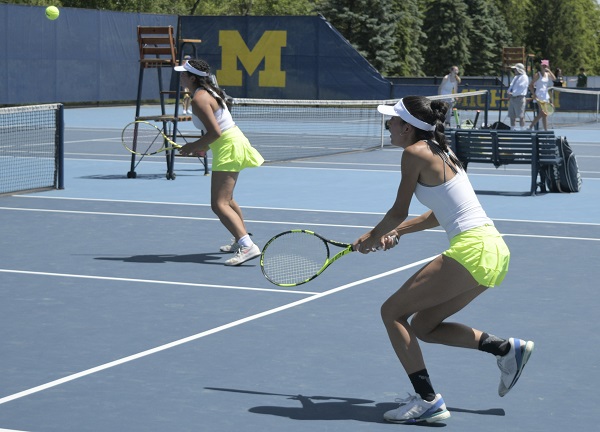 The Gryphons, whose previous titles came in 2009 and 2017, ended the reign of Bloomfield Hills Academy of Sacred Heart, which had won three Division 4 crowns in a row and seven of the previous nine. Greenhills finished with 35 points, compared to 26 for Sacred Heart and 18 for third-place Grand Rapids Catholic Central.

One key for the Gryphons was a simple slogan Randolph used as a mantra: “All joy, no fear.”

“We kept saying it out loud,” Branch said. “It kept running through my brain while I was playing my final match. “All joy, no fear,” and I played like that.

But the Gryphons displayed no small amount of mental toughness.

Randolph said the team of Branch and Nallamothu epitomized the Gryphons’ grit in the final, defeating the Sacred Heart team of Marisa Nafso and Kayla Nafso in their third meeting of the season.

"We had a couple of matches where we were way down, or a two-point match and we fought back against good teams, and we got a lot of character points,“ Randolph said. "So we’re really, really proud of the way the kids fought.”

But the camaraderie the Gryphons enjoyed as a team also played a role.

"I felt like I reconnected with tennis in a different way,” said freshman Maddie Morgan, who reached the semifinals at No. 1 singles. "In USTA, it’s very competitive. The vibe isn’t as welcoming as high school season is. So I regained the ability to love playing tennis, and I really looked forward to the matches.” 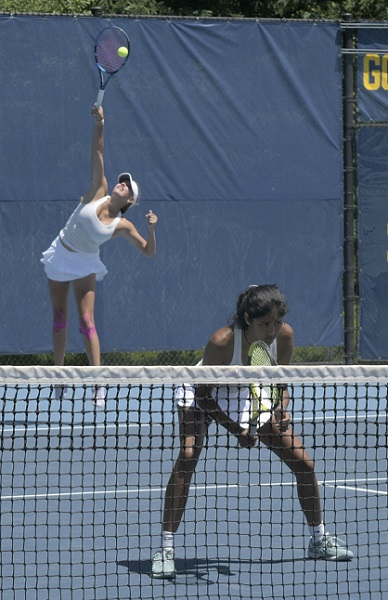 Branch and Nallamothu, who last season played No. 2 and No. 1 singles, respectively, embraced both their new roles on the court and as team captains guiding a group with six freshmen.

"I did not enjoy playing singles,” Branch said. "It was so lonely, and this year to come out and play with my best friend and play 1 doubles together was like more than I ever could have wanted.

"All these freshmen who came in didn’t know that to expect,” Branch continued, "and we got to shape the team how we wanted it. We got to create the vibe we wanted and got to decide how we wanted it to go and how they can take it forward for next year."

The duo will be able to watch from a good vantage point: Both will attend nearby U-M next year.

"It was really cool because typically I don’t have a team when I play tennis,” she said, "so it was really nice to have a team supporting me and me supporting them. It was just a lot a fun and a cool experience to represent my high school.”