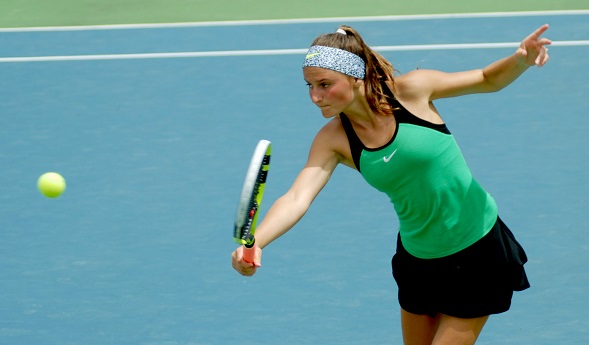 MIDLAND – To say the Midland Dow girls tennis team enjoyed a boost playing close to home Saturday afternoon would be an understatement.

Dow coach Garrett Turner wasn't about to apologize after watching the Chargers win the Lower Peninsula Division 1 girls tennis championship at the Greater Midland Tennis Center. Dow had last won the title in 2009 and finished second last season and in 2010.

“We came out ready to go. We played a lot of great tennis, and we got the job done,” Turner said. “I was proud of what we accomplished seven years ago, and I couldn't be more proud of this year's team. We went out and battled a very tough Northville team and got the win. It's a true testament of how much we worked in the off season to prepare us for this moment. What a year. What an accomplishment."

Dow finished with 33 points to edge Northville, which finished with 30. Grosse Pointe South was third with 18 points, Ann Arbor Pioneer fourth with 17 and Rockford fifth with 14.

Northville, the reigning Division 1 champion, fought hard right up until the final match. But Dow's Caroline Szabo clinched the title for the Chargers by defeating Northville's Shanoli Kumar 6-2, 6-3 at No. 2 singles.

The win was redemption for Szabo, who was forced to watch last year's Finals from the sidelines because of an injury.

"Sitting out last season was hard to watch, especially when we were close to defeating Northville," Szabo said. "It was hard not being able to help the team.

"Watching last year, to clinching the title this year, it is pretty incredible."

Northville coach Linda Jones was confident the team would hang close to Midland Dow heading into the tournament, but she knew it was going to take some stellar performances by her team to get past the Chargers.

"To win it last year and to finish second this year is something that has never happened at Northville High School," Jones said. "These girls have worked so hard to make it this far and just miss winning another state title is extremely gratifying to our team. We knew Dow was doing to be tough, but our girls hung in there and fought to the end."

Of the eight flight championship matches, Northville and Dow competed head-to-head in six. Szabo gave Dow a win at No. 2 singles, while Sarah Ismail added a Chargers' win at No. 3. 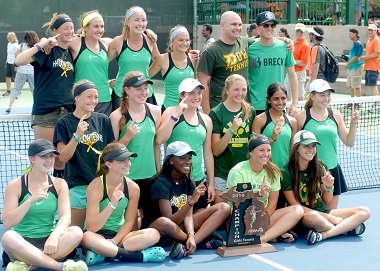 Ismail beat Northville's Joanne Gao, 6-1, 6-3. Ismail, a sophomore, is in her first year at Dow and on the tennis team. She was home-schooled as a freshman and played in USTA tournaments.

Ofori-Darko, a senior, said to end her career with a team championship is something she will always remember.

"I have won three individual titles in my career, but to finally get that team championship in my senior season is just icing on the cake," Ofori-Darko said. "My high school career is now complete."

Dow added another title in No. 2 doubles when the third-seeded team of Meghan Killmaster and Kelly Livingston upset Northville's Reeshma Kumar and Molly Bis.

Northville earned a win at No. 3 doubles when Neha Chava and Sophie Zhuang outlasted Mina Fabiano and Tatum Matthews of Dow, 6-3, 7-6 (7-2). The Mustangs added a win in No. 4 doubles when Brittany Macaddino and Alexandria Petix defeated Dow's Maggie Schaller and Marie Marche.

As mentioned, only two matches did not include Dow and Northville players facing off.

At No. 1 singles, West Bloomfield’s Anika Yarlagadda captured the title with a 6-1, 6-4 victory over Raven Neely of Grosse Pointe South. Michi Ota of Ann Arbor Huron won No. 4 singles with a 6-4, 6-2 win over Emily Roopas of Ann Arbor Pioneer.