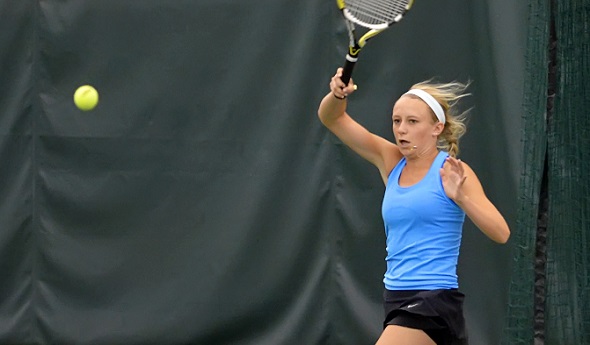 GRAND BLANC TOWNSHIP — Athletes sometimes have a mantra they repeat to get through tough patches in the heat of competition.

Power-packed words like “compete,” “strong” and “courage” often provide a mental boost to the struggling athlete.

So, what went through the mind of Bloomfield Hills Lahser junior Mollie Fox with the MHSAA Lower Peninsula Division 2 No. 1 singles championship on the line?

“‘Angry bubbles and elephants,’” she said. “Those are the words I repeat to myself to laugh and keep things more lighthearted, just when things start to get close.”

There were plenty of tense moments for the top-seeded Fox, who was pushed to a rare three-set match before emerging victorious by a 7-5, 4-6, 6-4 score over previously unbeaten senior Sara Remynse of Richland Gull Lake on Saturday at Genesys Athletic Club.

Fox broke Remynse’s serve in the third set to take a 4-2 lead. A break by Remynse closed the deficit to 5-4 before Fox closed it out on her opponent’s serve.

After taking a 4-1 lead in the first set, it was a battle all the way for Fox, who was upset in last year’s semifinals after also coming in with a No. 1 seed. 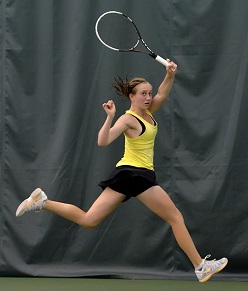 “I went in with a little less pressure than before, knowing it’s a game and whatever happens will happen,” Fox said.

Remynse beat Fox in a USTA tournament last summer, but wound up on the short end of a highly competitive match on Saturday.

“She’s a really good player,” Remynse said. “She deserved to win. She was the better player in the third set. I can’t be mad.”

“People didn’t think we were going to be as good as what we were,” Marian coach Lincoln Wirgau said. “We have 14 girls on our team, myself and my assistant. We circled up after our team was set, and it was us 16 against everybody else; we were fine with that. I like our odds with those girls and our six seniors.”

A common thread for this year’s team and Marian’s 2010 squad is the presence of a Lunghamer sister.

After winning a marathon 3-6, 7-5, 7-5 semifinal over Mason’s Samantha Perkins, Lunghamer won the title with a 6-3, 6-2 decision over Claire Markley of Seaholm.

“I always saw them winning state titles and never knew what a state title was like,” Lunghamer said. “I always watched them being excited and happy about it. It’s pretty cool.”

Lunghamer was Marian’s only singles champion. The Mustangs also had champions at No. 2 doubles, with first-time finalists Tatyanna Dadabbo and Sally Thorensen winning. 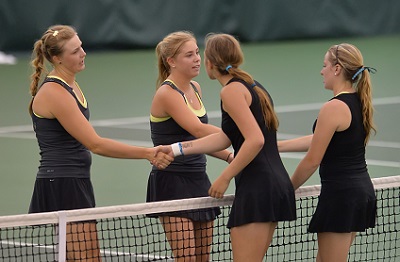 Okemos sophomore Emily Struble repeated as No. 2 singles champion in dominant fashion, winning 48 games and losing only five in four matches. She led 5-0 in the first set of the finals against Lauren Dietz of Marian, then lost two games in a row before regrouping for a 6-2, 6-0 victory.

The No. 1 doubles championship duo of senior Nancy Benda and junior Jackie Meier of Seaholm never played together before this year.

Benda was a successful singles player, losing in the semifinals in 2011 and the second round last season in the No. 1 flight. Because of a wrist injury, it was determined that playing doubles would be best for her.

“It was definitely a different game,” Benda said. “I wasn’t used to doubles at the beginning of the season. It was an adjustment period, but Jackie and I came together. It was mostly getting used to the court and having two girls on the other side of the net. There’s more strategy involved.”

Meier was on the championship No. 3 doubles team last year before making the leap in competition to No. 1 doubles.

“At No. 1 doubles, every single team comes out to play so hard,” Meier said.

Lahser won half of the singles titles, with Meryl Reams taking the No. 4 flight with a 6-2, 6-1 victory over Catherine Yaldoo of Marian.

Seaholm’s Lauren Benderoff and Sam Lareau won No. 4 doubles by a 6-2, 6-1 score over Charlotte Garrison and Madison Lorenz of Bloomfield Hills Andover.