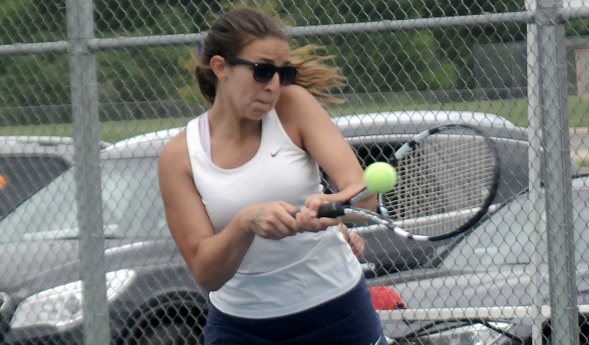 HOLLY – If anyone watching the Lower Peninsula Division 4 No. 1 singles championship match Saturday wondered why Jackson Lumen Christi junior Taylor Smith was jumping up and down so much in between points, she had a method to that madness.

The second seed going into the tournament, Smith had lost her previous two matches this season to top seed Natalie Moyer of Kalamazoo Hackett, and Smith learned one valuable lesson before their third meeting.

“I had to constantly keep moving my feet,” Smith said. “I couldn’t stand still. I had to keep going the entire time and keep jumping up and down. I couldn’t get to her ball (in the first matches). She smacks the ball really hard, and in order to get the ball back I had to keep moving.”

Smith kept moving alright, all the way to when she accepted the medal handed out to the MHSAA Finals champion after she avenged those two earlier losses to Moyer with a 6-2, 6-2 victory.

Smith’s title at No. 1 singles ended up propelling Lumen Christi to its best ever finish at an MHSAA Girls Tennis Final, as the Titans took second with 27 points.

But leaving Holly High School with the championship trophy for the first time since 2009 was Ann Arbor Greenhills, which finished first with 32 points to cap off a year full of motivation after Greenhills disappointingly took fifth at last year’s Final.

Greenhills showcased its depth in winning the title with champions in four flights and a runner-up finish in another. 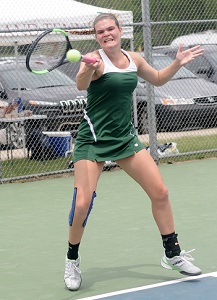 Vidhya Rajaprabhakaran at No. 3 singles, Phoebe Sotiroff at No. 4 singles, the team of Baani Jain and Giselle Farjo at No. 2 doubles and the team of Jamie Todd and Ryan Perry at No. 3 doubles were the champions for Greenhills.

Julia Freeman advanced to the final at No. 2 singles before losing to Maggie Ketels of Kalamazoo Hackett, 6-1, 6-4.

“Every single one of these kids made a huge contribution under pressure,” Randolph said. “We have five super seniors who have been dreaming about this since they were ninth graders and we were getting our hats handed to us.”

Lumen Christi coach Teri McEldowney had mixed emotions after everything was decided.

On one hand, she felt winning it all was an obtainable feat for her squad, but she said a couple of hard losses Friday and a couple more Saturday were too much to overcome.

On the other hand, though, it’s never a bad thing to finish higher than any other team in school history.

“My girls played the best that they ever played,” McEldowney said. “They brought it here, and that’s what matters to me.”

In addition to Smith’s title, Lumen Christi’s No. 1 doubles team of Geraldine Berkemeier and Jocee McEldowney prevailed in a thrilling three-set match over Sara Gerard and Anna Keating of Sacred Heart, 4-6, 6-3, 6-4.

PHOTOS: (Top) Ann Arbor Greenhills’ Julia Friedman returns a volley during a No. 2 singles match Saturday. (Middle) Jackson Lumen Christi’s Taylor Smith powers through a swing on the way to winning No. 1 singles. (Click to see more from HighSchoolSportsScene.com.)