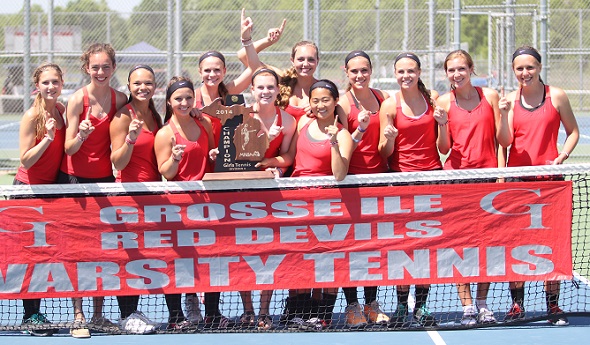 By Keith Dunlap
Special to Second Half

HOLLY – MHSAA Finals championships are typically remembered forever in trophy cases of schools around the state. But sometimes there are championships that differentiate themselves more than others from a historical perspective.

No doubt, the championship the Grosse Ile girls tennis team captured Saturday is one of those unique pieces of history that will stand out forever.

Coach John Shade has presided over Grosse Ile’s program for 42 years, but never got to experience the feeling of winning an MHSAA Finals championship until the Red Devils won the Lower Peninsula Division 4 title on Saturday at Holly High School.

Needless to say, there were a lot of fellow coaches who wanted to offer congratulations to Shade afterward, and there will likely be many more in the coming days who couldn’t be happier to see him win his first title with the girls after previously winning with the boys program.

“It’s nice to hear congratulations from your peers,” Shade said. “I think most people know me and know Grosse Ile.”

The Red Devils produced individual champions at two flights, Kennedy Quinn at No. 4 singles and the team of Rose Tucker and Casey Guthrie at No. 4 doubles. But it was the overall depth of Grosse Ile that stood out.

The seeds for Grosse Ile’s title were really sewn at last year’s MHSAA tournament, where the Red Devils finished an agonizing three points behind champion Bloomfield Hills Academy of the Sacred Heart.

With much of its core returning, Grosse Ile knew this could be the time to win that elusive championship, and it was.

“This was our goal since last year,” Latala said. “We are all really excited that we are state champs. We really wanted to make our coach really proud.” 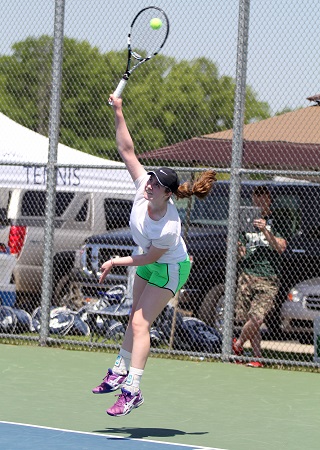 Redemption from last year was also a theme for Ann Arbor Gabriel Richard senior Colleen O’Brien, who finished off an unbeaten season by winning the title at No. 1 singles.

O’Brien, who will play at Michigan State University, lost in last year’s championship match, but avenged that by beating Calla Ramont of Lansing Catholic, 6-3, 6-2.

“I think I was motivated to win more,” O’Brien said. “I just never wanted to give up, and keep fighting. Obviously last year I needed to fight a little more to win that match. I just had that mentality.”

It often can be a mental strain for a player to try and keep a perfect season going, but O’Brien’s focus turned out to be too good.

“I blocked it out,” O’Brien said. “It didn’t really affect me too much.”

Gabriel Richard also had the champion at No. 2 singles, as Maddy Szuba beat Jessica Bouma of Kalamazoo Christian, 6-3, 6-2.

Audrey Bouma of Kalamazoo Christian beat Latala, 6-3, 6-1, to win the No. 3 singles title, and Quinn beat Sydni Greenhoe of Portland at No. 4 singles, 6-2, 6-3, to round out the singles portion of the tournament.

In the semifinal, Flynn and Anteau upset the top-seeded team, Gabrielle Kelly and Stephanie Kelly of Ludington, and both Lemon and Spangler admitted they were surprised to not be facing the Ludington team in the final.

That set up a rematch from a regular-season match, when Lemon and Spangler rallied from a 5-0 deficit to win the first set and ultimately beat Flynn and Anteau.

“In the first set, we didn’t really realize their disadvantages,” Lemon said. “In the second and third set, we figured it out and that is how we won.”

Olivia Laman and Brooke Schneider beat Kvasnitova and Formentin, 6-4, 6-4, to win the title at No. 2 doubles, Sarah Stayman and Rosie Wilson of Traverse City St. Francis won the title at No. 3 doubles by beating Julia Maltbie and Claire Flewelling of Ludington in the final of that flight, 6-1, 7-5, and Tucker-Guthrie beat Brooke Butterfield and Morgan Wittkopp of Portland in the final of the No. 4 doubles flight, 6-2, 6-2.