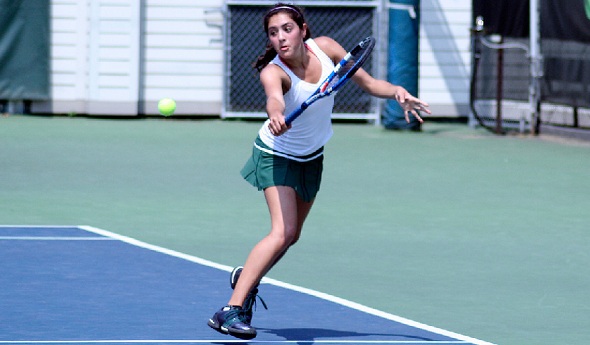 Only three champions are back this weekend in flights they won at the 2011 Lower Peninsula Girls Tennis Finals.

That means the likelihood of a lot of first-time individual winners -- and some shuffling among the contenders for MHSAA team titles.

Below is a look at the races at a glance in all four divisions, plus flights that could make the biggest differences in deciding team champions. Play begins at 8 a.m. both Friday and Saturday, with Division 1 at Midland Tennis Center, Division 2 at Kalamazoo College, Division 3 at Fenton and Holly high schools and Division 4 at Holland High School. Admission is $5, or $10 per car where applicable.

Division 1: Port Huron Northern is ranked No. 1 and seeking its first MHSAA team championship since 2002. But the Huskies must hold off No. 2 Clarkston, which won its first team title last season and has six seeded flights – including five seeded among the top two in their respective flights. Port Huron Northern is seeded in seven flights, with four either numbers one or two. Grosse Pointe South, ranked No. 3, is seeking its first team title since 2008 but has won 12 in the tournament’s 30 seasons. (Click for full brackets)

Division 2: If a team is going finish ahead of reigning champion Grand Rapids Forest Hills Northern, it’s likely going to be from the Birmingham/Bloomfield Hills area. FHN has won six straight championships, all outright except when it shared with Bloomfield Hills Marian in 2010. Marian is ranked No. 1 this spring and finished ahead of No.3 Seaholm at their Regional, while Bloomfield Hills Andover is No. 2. Forest Hills Northern is ranked No. 4, and despite six seeded flights will need some upsets to keep the streak going. (Click for full brackets)

Division 3: Cranbrook-Kingswood is the favorite again after edging Detroit Country Day by a point in 2011. The Cranes are seeded at every flight, with six flights at Nos. 1 or 2. East Grand Rapids, owner of 16 MHSAA titles, is ranked No. 2 as a team but seeded in only two singles flights. The Pioneers will need big points from doubles flights that are all seeded No. 3 or better. (Click for full brackets)

Division 4: Academy of the Sacred Heart is expected to take another step with the top ranking after coming in as runner-up a season ago – Sacred Heart’s doubles teams have the top seeds in all four flights. But Capital Area Activities Conference White rivals Williamston and Lansing Catholic – ranked Nos. 2 and 3, respectively – will provide plenty of competition. The Hornets are seeded at seven flights and seeking their first championship since 2008. (Click for full brackets)

Plenty playing for No. 1: The No. 1 singles bracket in Division 1 is filled with intriguing contenders. Top-seeded Mary Hannah, of Saline, was a Quarterfinalist last season when she lost to Grand Ledge’s Hailey Barrett, who is seeded No. 3 this spring. No. 2 seed Katie Brozovich of Clarkston was the champion at No. 3 singles in 2011 and has dominated tough competition this season.

Unfinished business: Four of the eight players who made up the Division 1 No. 1 doubles semifinalists last season are back at that flight, but Ann Arbor Pioneer’s top-seeded pair of Alexa Arvidson and Julia Rampton are the lone pair of that group that returns intact.

Running up to the top spot: Bloomfield Hills Andover’s Kristen Law and Erin Weingarten were the runners-up at Nos. 2 and 3 singles, respectively, last season. Both were two seeds in 2011 and are four seeds this weekend in the same flights.

The champ is here: Cranbrook-Kingswood’s Alexandria Najarian is one of three returning champions – Clarkston’s Lexi Baylis (Division 1 No. 2) and Kalamazoo Hackett’s Meika Ashby (Division 4 No. 1) are the others – but should get a tough test from second seed Sydney Liggins of Grand Rapids Catholic Central, a semifinalist in 2011.

Our turn: Allegan’s Kaycee Harness will try to help teammate Christin Drozd get one more win this season after Drozd and Hannah Schulz finished runner-up at No. 1 doubles in Division 3 last season. Harness played No. 3 singles at last season’s Finals.

Singles showdown: Ashby, mentioned above, is the returning champ in Division 4 but seeded only No. 2 behind Ann Arbor Greenhills’ Kasey Gardiner – the No. 1 champion in both 2009 and 2010. Gardiner didn’t compete in last season’s Finals.

Doubles must deliver: Academy of the Sacred Heart is planning on big finishes from its doubles teams, and that could start at the top with No. 1 pair Kelsey Nagle and Emily Nash. They are the top seed after making the semifinals last season as the No. 3 seed in this flight.