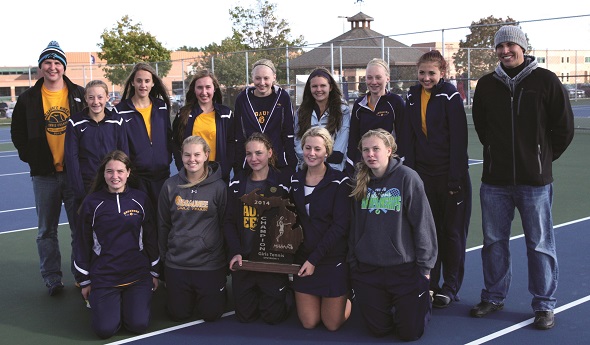 KINGSFORD — It has been quite a battle between Negaunee and Kingsford for the Upper Peninsula Division 1 girls tennis championship the past three seasons.

They shared the title two years ago. Kingsford then was crowned champion and Negaunee was runner-up last season.

It was Negaunee’s turn to gain top honors Wednesday as it won 4 of 8 flights and scored 16 points. Runner-up Kingsford had 13, followed by Escanaba with 11, Gladstone with six and Menominee and Marquette at three apiece.

The Miners made title-round appearances in all four singles flights and No. 2 doubles.

Getting to the finals alone was no easy task for Anderson-Harsila, who edged Gladstone’s Bailey Griebel-Carly DeVet 6-4, 7-6 (7-4) in the semifinals.

“That was really a key for us,” Negaunee coach Kyle Saari said. “The singles have been our strength all year, but we needed to get points somewhere in doubles. Fortunately, Lauren and Kassey came through for us and we were able to win a couple three-setters and tie-breakers.”

The Miners added three victories in singles, including senior Allison Carlson’s 6-4, 2-6, 6-1 triumph over Kingsford’s Janay Walters at No. 1 on a sunny, but chilly and windy day.

“I just stayed positive in the third set,” said Carlson, who also won at No. 1 singles last year. “Late in the second set, I tried to do some things to build momentum for the third set. I definitely had to fight for this one. I couldn’t go for the corners because the wind would carry the ball out of bounds. I had to keep the ball in the middle.”

After the tournament, Saari took a few moments to pay tribute to Carlson’s career. 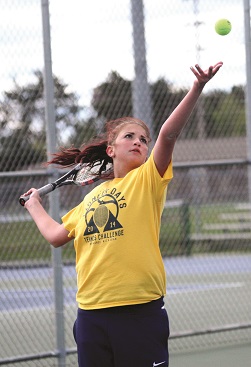 “Allison probably had one of the finest careers at our school on the girls side,” he said. “She’s everything you want for a No. 1 singles player. Once you get to a third set, mental toughness becomes a big factor, especially after losing the second set.”

Negaunee’s Angela Ring clipped Kingsford’s Katy Hicks (6-2, 6-3) in No. 2 singles and senior Dana DeBretto beat Escanaba’s Kayla VanPortfliet (6-4, 6-2) at No. 3 on a day when groundstrokes were the rule.

“Groundstrokes have been my main advantage throughout the year,” said DeBretto, who captured the No. 4 singles title a year ago. “I wanted to hit fast-paced groundstrokes. I was trying to keep the ball close to the net and let the wind do its thing. As long as I was hitting the ball faster, the less chance there was for the wind to carry it.”

Escanaba sophomore Hannah Beversluis prevented the Miners from sweeping singles with a 6-3, 6-4 triumph over Allison Ring at No. 4.

“Everything about my game is a lot more consistent this year, especially my serving,” said Beversluis, who placed fourth in that flight last season. “It’s easier to predict where the ball is going to go. There’s more strategy to it, which makes it more fun.”

Beversluis was trailing 2-1 in the second set, but rallied to take the next three points for a 4-2 lead.

“In the finals, I played one of my best matches of the season,” she added. “Although, it was a little more complicated with the extra factors. The wind was a disadvantage for both players. It was pretty hard playing the first match because it was so cold (with temperatures in the 30s). My hands actually got numb.”

Escanaba is coached by Dennis Lueneburg, who already returned to California for the winter. Assistant Ernie Burch handled the coaching duties in his absence.

The situation provided motivation for many of Escanaba’s players, including seniors Olivia LaForest and Angie LaMarche, who were crowned No. 4 doubles champions.

“We wanted to win it for Denny,” said LaForest, who was part of the No. 3 doubles championship team a year ago. “Through the season he kept reminding us to take it one point at a time. We talked to Denny on the phone before the meet and he told us it was 75 degrees out there. We kept trying to pretend we were with him in California.” 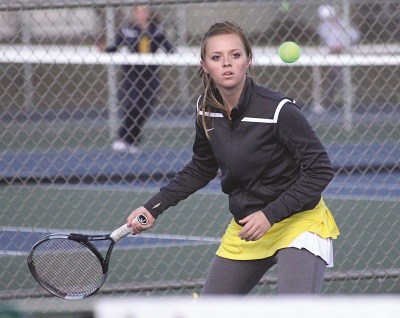 “This was our last year with him and it was like he was here in spirit,” she said. “I didn’t really think of this as a championship match. We just tried to play it like any other match.”

“We kept reminding ourselves how much we wanted it,” VanRemortel said. “Gladstone has a good team. They’ve improved from earlier this season.”

Jennings also was impressed by the Gladstone duo.

“We beat them handily during the regular season,” she said. “Although, we hadn’t played them since early in the season. We didn’t know what to expect. They played much better against us this time.”