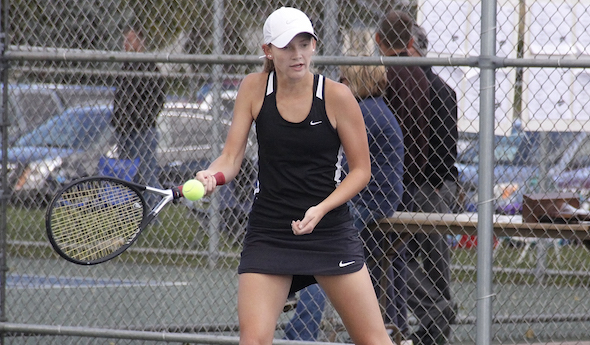 KINGSFORD — Prior to 2015, Ishpeming Westwood was enjoying a six-year championship reign in the Upper Peninsula Division 2 Girls Tennis Finals.

Then it was Munising’s turn to celebrate its first championship a year ago.

Both schools were celebrating on a mostly sunny and cool Wednesday as they shared this season’s title with 16 points apiece. Iron River West Iron County placed third with 14.

“The last one is always the best one,” said Westwood coach Chris Jackson. “You never know when you’re going to win it again. We went into this season with what we thought would be a solid lineup, then about 3-4 girls moved out of the district. We needed some younger kids to step in and do some things. We’ve been building all year. Our lineup had to be moved around. We had to ask our depth to step up.”

Munising also had to overcome a few things to maintain a share of the title, as coach Rod Gendron explained.

“We don’t have enough courts to host a meet,” he said. “All the girls had to practice on what we had, although I think that made our team even closer. Our team chemistry has been good. We’re always supporting each other. Westwood is a tough team, no doubt about it. We’re very happy with our performance.”

Munising secured its share in No. 3 singles where Kelsea Ackerman posted a 6-3, 6-3 victory over West Iron’s Isabelle Hoogenboom.

Westwood clinched its share a short time earlier in No. 1 doubles, with seniors Mady Mattson and Averie Kangas gaining a 6-4, 6-2 triumph over Munising seniors Marissa Immel and Bailey Downs during a match that endured a half-hour rain delay.

“We really wanted this one,” said Mattson. “We were on top of our game. It felt like we had good energy, then it took a little while for us to get that back (after the delay).”

Immel and Downs, who edged the Westwood duo on a tie-breaker during the regular season, returned to the court with plenty of energy after the showers moved through the area. By then, however, they were trailing 3-1 in the second set and didn’t seem to have an answer for Mattson and Kangas’ lobs over the net.

“We felt if we moved around a lot and communicated, we could find the holes,” said Kangas. “They’re a good team, but I think the rain delay helped us refocus.”

Gendron was impressed with Westwood’s performance at No. 1 doubles.

“Their overhand shots and soft lobs over the net were very effective, and they made very few errors,” he said. “Marissa and Bailey gave us two great years. They won a lot of matches.”

“I thought my serving was pretty consistent,” Mattson said. “I think I got to her a little mentally. Being a senior, there’s a lot of pressure on you, especially when you’re the No. 1 seed. I was runner-up here last year, which I think motivated me. I’m happy with how things ended. Katarina is a good player. She has two good years of tennis ahead of her.” 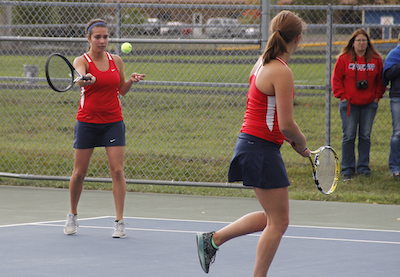 Munising junior Marissa Ackerman also was crowned champion for the first time after taking a 6-2, 6-0 decision from Westwood’s Marissa Carello.

Both players appeared to follow a conservative approach in the first set. Ackerman then took charge in the second after gaining the first point on a lob over the net.

“I think that kind of set the tone,” she said. “I always try to hit the ball short when my opponent is on the back line. I started going more for angles and hitting the ball harder in the second set. There’s a lot of pressure, but this is definitely worth it. I think losing in the finals last year had a great impact on today. I was able to learn some things from that. I had a better attitude than I did in last year’s finals.”

Gendron was happy with the performance by the Mustangs’ singles.

“Frankie played lights out in the finals,” he said. “Everybody at No. 1 singles is a good player. Marissa and Kelsea (Ackerman) hadn’t lost a set all year. I’m looking forward to them stepping up to No. 1 and 2 next year.”

“The key to our lineup is all six of our seniors played their best tennis all year,” said Jackson. “They wanted to be leaders. They did what they had to do. It all started with the (Mid-Peninsula) conference meet when Negaunee beat us by just one point (39-38). I think that was a confidence builder for our girls.”

“We told our girls it would be within 1-2 points (for the title), and we came up a little short today,” said Wykons’ coach Joe Serbentas. “We’re a young team. We had three sophomores in the singles finals. Yet, we were right there. Last year, we weren’t in the mix. We came a long way this year and were 9-2 in dual meets. We had a very nice season. The future looks good.”

PHOTOS: (Top) Munising's Frankie Mattson follows through on a swing during Wednesday's Upper Peninsula Division 2 Finals on the way to winning No. 1 singles. (Middle) Ishpeming Westwood's Paige Rivard and Cayla Ostola also were among flight champions, at No. 2 doubles. (Photos by Adam Niemi)