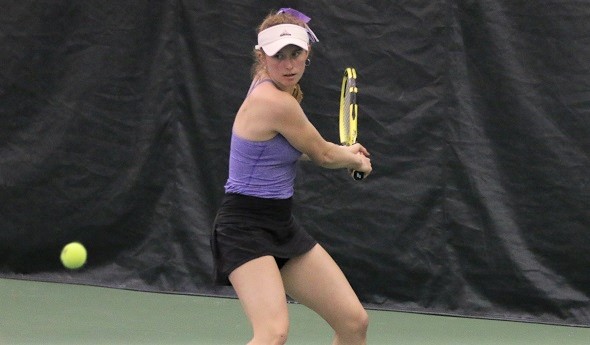 After a year away, Miller returned to high school tennis this spring and won her second No. 1 singles championship in Lower Peninsula Division 1, capping an undefeated season Saturday at the Greater Midland Tennis Center to earn the Michigan Army National Guard “Performance of the Week.”

Miller also had won No. 1 singles in LPD1 as a freshman before spending last year playing national events. Much was expected from Miller’s return to the high school courts, as she’s ranked 17th nationally in her graduating class by Tennis Recruiting Network and has committed to continue her career after high school at University of Michigan. Miller met all the pressure head on and shined, finishing 29-0 with just two lost sets the entire spring. She entered the LPD1 Finals as the top seed at No. 1 and gave up a combined seven points over her first three matches before falling in the first set of the finale 7-5 to Grosse Pointe South freshman Lily Jones, herself ranked 24th nationally in the Class of 2022. Miller bounced back to win the following two sets 6-0, 6-0. Her flight championship helped Pioneer to a fifth-place team finish with 19 points, an 11-place and 17-point jump from 2018.

Tennis runs in the family; Miller was guided into the sport by her father, and her aunt Annie Miller played professionally and rose to No. 40 in the world in 1998. Annie Miller went on to study at U-M, and Kari is carrying a 4.0 GPA and plans to study business with aspirations of a career in finance or consulting in New York City. Her immediate future, however, includes one more year of high school and another exciting opportunity – her sister Reese will be a freshman and join her on the Pioneer tennis team in 2020.

Ann Arbor Pioneer assistant coach Dan Goldberg said: “Obviously it’s a game-changer when you have the best player in the state come back and play high school tennis for her team. For her, personally, a lot of the tennis she plays at the national level is individual. She loves the girls on the team. She loves being a part of the team. That really was the big decision, along with the fact that she’s already committed to college. Her sophomore year she really needed to go where the competition was.’’

Performance Point: “The state tournament compared to all the tournaments I play isn't the most challenging, but I feel like it's different because there's a lot more pressure involved,” Miller said. “There's big crowds and people cheering. So in some ways I feel like it's actually a harder tournament than a lot of the ones that I'm used to playing. ... The girl I played at the Finals is really, really good, and she's a freshman, and she plays a lot of the same national tournaments as me. She ranks really high for her grade. We're pretty even – I knew that, my parents and coaches knew that, and I'm sure she and her parents and coaches knew.”

All expectations fulfilled: “When I decided to play (high school) again, I don’t think I really thought about it. (But) there was actually more pressure this year than there was last year because everyone knew and lot of people were talking about how I was playing again. I just had to try to not think about what others expected. Obviously I expected a lot from myself, but it made it harder for me when I saw what the expectations were (from) other people. It was mentally tougher this year.” 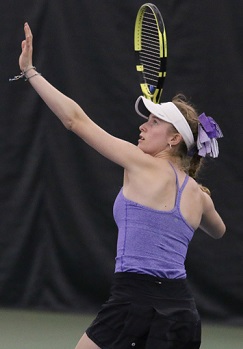 Aunt Annie knows: “I do sometimes talk to her. I don't really see her that much because she lives in Portland, Oregon. But she Facetimed me after the state tournament, told me congrats, and we talked about it for a little bit, how I was happy that I won and some of the stuff that went on during the tournament. She understands because she's done all I've done, and then more.”

Behind the lens: “My life during the school year is basically homework and school, or on weekends I’ll have a tournament or hang out with my friends a little. When I go on vacation, I usually try to bring my camera. … Recently I've been taking pictures of other people – me and my sister will take pictures of each other or together on vacation, but sometimes I take pictures of nature where I am. I haven't had as much time to do that recently, but mostly during the summers. In seventh grade I saved a bunch of money to buy a camera, so it was definitely worthwhile because it's really nice.”

More to accomplish: “Next year I just want to be able to play on the team with my sister. And I think honestly, the one other thing is next year I think we'll be even better (as a team) than this year. Next year we really need to try to win the state tournament. I think we'll have a good chance. I mean, I want to try to win individually again – winning a third time would be nice – but I already won twice. The one thing I would say I haven't experienced yet is winning as a team.”

- Geoff Kimmerly, Second Half editor
and Perry A. Farrell, correspondent

PHOTOS: (Top) Ann Arbor Pioneer's Kari Miller lines up a backhand during a first-day match at last weekend's Lower Peninsula Division 1 Finals at Greater Midland Tennis Center. (Middle) Miller waits on a volley during her run to the No. 1 singles title. (Click to see more from HighSchoolSportsScene.com.)