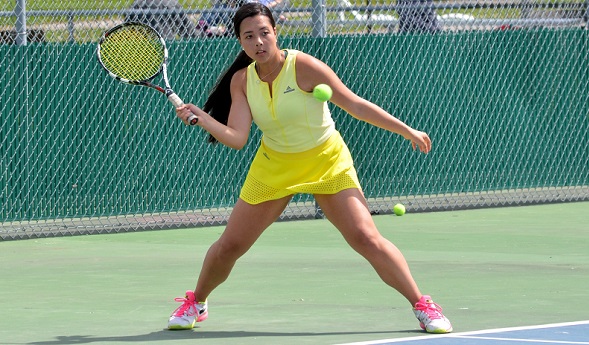 Traverse City Central’s No. 1 singles player became the latest in a long line of Trojans to claim her 100th win, reaching the milestone with two more at last week’s Saginaw Heritage quad to earn the Michigan Army National Guard “Performance of the Week.” Roberts claimed her 99th career victory in a tie-breaker against Grand Blanc’s Ava Dunlap, then her 100th in straight sets over Davison’s Krystan Delay.

Roberts’ record this season is 10-6, and her career record now stands at 106-24. While Roberts became the 44th player in Traverse City Central girls tennis history to reach 100 victories, she’s the only one in program history to win an MHSAA Finals singles championship – she finished first at No. 4 singles in Lower Peninsula Division 1 as a freshman as her team finished fifth overall. Roberts moved up to No. 2 singles as a sophomore as the Trojans tied for 12th in Division 1, and last season she won a Regional title at No. 1 singles and made all-state as the Trojans tied for fifth in Division 2. Central is ranked No. 7 in Division 2 this week, and the Trojans have taken on some of the best across the Lower Peninsula – five of Roberts’ six defeats this spring have come against players from teams ranked in Division 1 or 2. She also owns wins over Kaitlyn Fox of Grand Rapids Forest Hills Central – last season’s Division 2 runner-up at No. 2 singles – and Bloomfield Hills Cranbrook Kingswood’s Emma Sable, the Cranes’ top player when they finished third in Division 3 in 2017.

Roberts carries a 3.8 grade-point average and will attend Michigan State University. She’s a member of the National Business Honor Society and will major in finance on a track to become a chartered financial analyst. She also was a member of the Traverse City Central girls bowling team as a junior, something she did more for fun. Tennis is the serious pursuit – but as captain this spring she’s made fun a focus for this team as well as it’s continued to rank among the state’s elite.

Coach Shane Dilloway said: “Autumn's success starts with the years she has spent on the court. Leading up to high school, she dreamed of playing Trojan tennis, and her dedication to that dream turned into reality her freshman year when she earned a singles position in a highly experienced singles lineup. Since then, Autumn has climbed the singles ladder to play 1 singles her junior and senior years. She thrives on competition, adapts quickly to each match, has a versatile game and is extremely coachable. One of her strongest attributes is she doesn't put her emotions on display, aside from the joy she has for the sport. She experiences a range of emotions internally, from self-doubt to pure glee, but she keeps that hidden from her opponents. Above her inside-out forehand and touch volleys, her poker face may be her greatest weapon. She's an asset to the program and elevates everyone's game. Her ability and skills challenge her peers to rise to their best, and her respect for the game, her opponents, and the overall environment make Autumn a leader by example.”

Performance Point: “I had an idea of how many wins I had going into the tournament,” Roberts said. “I originally thought that I wasn’t going to get the 100th win that day because I started losing my first match; I needed two wins, so if I didn’t win the first match, I wasn’t going to get my 100th. But I actually came back in the second set and it went to a tie-breaker, and I ended up winning. And after that one, I kinda had a feeling – I had really positive energy and I was able to get my 100th later in the day. … I’ve played tennis all my life, and I was always looking forward to joining the century club because I knew a lot of people who hit their 100th their senior year, and I have a lot of friends who are in the club. It’s really cool, and it’s great to be part of that experience, and now I get a banner with all my other friends in the century club.”

Finding treasure: “Obviously the state title was pretty great freshman year. But honestly, my teammates were really making each season so great. Winning is fun and all, but I think just the memories of everyone on the team is what I’ll treasure most later in life. Looking back, it’s really just smiling and laughing with my friends – but the wins are fun too.”

Captain Roberts: “When I came in as a freshman, it was just me and another girl, and we were kinda on the outskirts at first because the team had known each other for so long. After I won the state title, it brought me in. And then throughout the years, as new people came in, I would round everyone up and I was able to get the captain position this year. I feel like I’ve really grown as a player and as a teammate, being able to bring everyone together as that leading figure. (Grown by) just really being comfortable on the court, and off the court, and just keeping a positive mindset and getting everyone else fired up to play. I know how it feels to be scared at first, but I think I’m doing a good job of incorporating everyone, making everyone feel comfortable. Everyone’s just having fun.”

Let’s make a run: “Everyone on the team is doing really well. We have some underclassmen handling the pressure really well. I think we’re going to improve over the season and come out pretty strong at states, hopefully. I think going into playing really good DI schools (as part of the tough regular-season schedule), it’s not being so hard on yourself and keeping that positive mindset. Because if you go in expecting a bad outcome or just trying to hit whatever, you’re going to mess up. If we just refocus, regroup, give ourselves some credit for being how good we actually are, then going into those big matches it will change the outcome. … I want each flight to gain some confidence, and playing against the top dogs I want to test them a little bit, give them a good match, not give up. If we’re down, I want to be able to come back and fight and just give it our all. We have some big tournaments coming up – one in Holly this weekend -- and just hitting as hard as we can and giving it our best, it will really help us.”

Making it count: “Since it’s my last year, I just want to leave without any regrets. I don’t want to look back and think, ‘Oh I should’ve done this,’ so I think in the moment not letting my head get away from me and staying focused on each point. Even if I lose, I just want to feel like I gave it my best shot.”