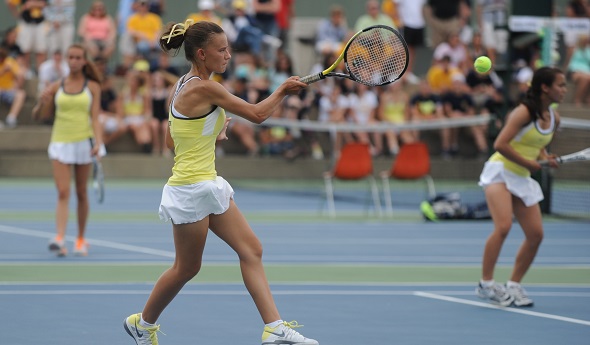 MIDLAND – For the Port Huron Northern girls tennis team, winning the Lower Peninsula Division 1 championship at the Midland Community Tennis Center was all about redemption.

Last year, the Huskies tied Clarkston for second place with 25 points as Grosse Pointe South walked away with the title after tallying one more.

Northern came into the tournament believing that this year's magic number was 24.

"I knew if we hit the 24-point mark we would have a shot at winning the state championship," said Northern coach Char Sweeney.

Little did Sweeney know before the tournament got underway Friday that 24 would be the winning number and that her team would be on the winning end of things after the final matches were over Saturday afternoon.

Northern scored 24 points to top Farmington Hills Mercy, which finished second with 22. Grosse Pointe South and Clarkston tied for third with 20. Rounding out the top five was Northville with 14 points.

"We came so close to winning the whole thing a year ago, and we were a determined group coming into the season," Sweeney said. "I would have loved to have won a state championship last season and shared the experience with my older daughter, but to be able to share this with my daughter (Allie) this year along with the rest of the team is pretty special."

"This was probably our highest finish in the last 15 years," Stafford said. "I told the girls even before the tournament started that we play together. We win together. We lose together. Whatever happens after that is up to us. The girls rose to the challenge in the tournament and played their hearts out. I couldn't be prouder of what they accomplished here today."

With five freshmen, three sophomores and only two seniors, Stafford's team should contend for the top spot in the tournament for years to come.

Meanwhile, it was Northern that walked away with a Finals championship, also with a young team that will continue to surge in coming seasons.

Brozovich was the only singles winner that wasn't a No. 1 seed in her flight. Mary Hanna of Saline won at No. 1 singles; at No. 3 singles Dana Olsen (Clarkston) defeated Maggie Sweeney (Grosse Pointe South) 6-0, 6-4, and at No. 4 singles Madie Flournoy upended Jessie Guindi, 6-3, 0-6 and 6-2.

Brozovich's win was a game-changer for the Huskies.

"When Lizzie won we knew we could have a shot at winning the whole thing," Sweeney said. "Lizzie was so close to winning a year ago, she came into the tournament knowing what to expect this year. She was so poised an in control.

“This isn't a three-month passion for them. It's a year's worth of hard work and sacrifice. It's a long process to be able to accomplish what the girls did today."

In other doubles matches, Mercy's Anna Hinrichs and Mackenzie Zierau defeated Northern's Jenna Brettschneider and Maddie Neaton, 6-1, 4-6, 6-2, at No. 2; Evie VanDewege and Alyssa Roopas of Ann Arbor Pioneer handed Northern's Amy Tseng and Maggie Bacheller their first loss of the season, 4-6, 6-4, 7-5, at No. 3; and Northville's Shannon Williams and Libby Quinn bested Mercy's Julie Flanagan and Sarah Hinrichs, 6-2, 6-4, at No. 4.

The No. 2 doubles match lasted more than three hours. Tseng and  Bacheller already knew the team had locked up the title after the second set, but still would have liked to have won an individual  championship.

"That was by far the longest match we have been in all season," Tseng said. "We would have liked to have won a state championship, but we did it as a team and I couldn't be prouder of what we were able to accomplish as a group."

PHOTO: Port Huron Northern’s Amy Tseng and Maggie Bacheller play a No. 3 doubles match; they finished runners-up in their flight. (Click to see more at HighSchoolsSportsScene.com.)