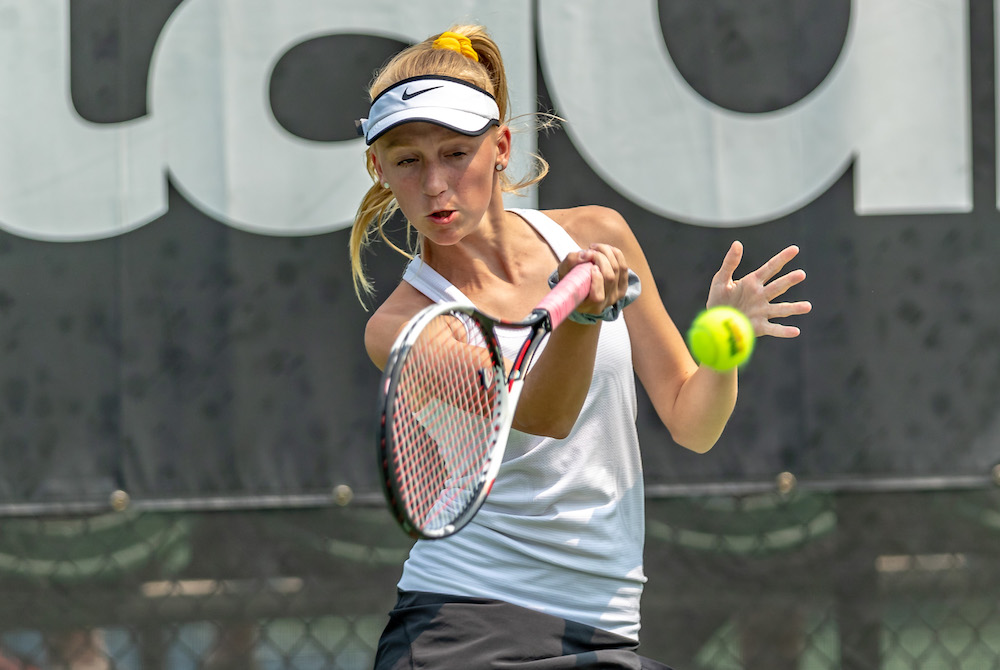 Lower Peninsula girls tennis was among sports forced to miss the entire 2020 season due to COVID-19.

But many of the state’s powers picked right back up this spring where they left off two years ago, including two reigning Finals team champions entering this weekend as favorites again and five No. 1 singles players who have either won that flight or finished runner-up during their careers.

This weekend’s Finals schedule does feature a few changes.

For starters, while Divisions 1-3 will continue with the traditional format playing Friday and Saturday, Division 4 will be played Thursday and Friday in the Kalamazoo area.

Below is a glance at the highest-ranked teams in each division and additional No. 1 singles players expected to be in contention. Click for full brackets and more on the MHSAA Website.

Ann Arbor Pioneer: The Pioneers are seeking their first championship since 2010 and first top-two Finals finish since 2011, and that effort will start with the top-seeded players in every singles flight – sophomore Reese Miller at No. 1, followed by freshman Elsie Van Wieren, junior Mia Goldstein and freshman Bridgette Kelly, respectively. Three of four doubles flights are seeded as well. Pioneer is 21-0-1 this spring, with its tie against No. 2 Bloomfield Hills on April 26. Miller – whose sister Kari won Division 1 No. 1 singles championships both seasons she played high school tennis – is 25-2 with her only defeats both to Detroit Country Day’s Julia Fliegner, who won No. 1 singles in Division 3 in 2018. Van Wieren is 27-0, Goldstein is 26-1 and Kelly is 23-0.

Bloomfield Hills: The Black Hawks are seeking their first championship and came up just short at the 2019 Final, finishing runner-up and two points back of winner Grosse Pointe South. They also are unbeaten at 17-0-2, with those ties against Pioneer and No. 3 Seaholm (which they had defeated two weeks earlier). Doubles will be Bloomfield Hills’ strength; No. 2 (Reagen Tomina/Carly Bernard), No. 3 (Eryn Stern/Natalie Raab) and No. 4 (Grace Bickersteth/Ellie Alberts) are top-seeded, with No. 1 Hannah Tomina and Noa Goldstein second-seeded and Hannah Tomina having been part of the No. 1 champion in 2019. The Black Hawks also have three seeded singles players, and could have an edge with No. 4 Julia Yousif entering as a second seed.

Birmingham Seaholm: The Maples have been among the Division 2 elite over the last two decades, with four championships (most recent 2018) and five runner-up finishes (most recent 2019) over the last 15 seasons. Seaholm did lose duals to Pioneer and Bloomfield Hills this spring, but are lined up to make a run at the top with six seeded flights including a pair of third seeds (Sofia Gryzenia at No. 2 singles and Courtney Marcum at No. 4). Ashley Buechner is part of the fifth seed at No. 1 doubles and was part of the champ at No. 4 two years ago.

Zoe Angell, Midland Dow: The Chargers senior is the second seed at No. 1 singles and undefeated this season at 23-0. She reached the No. 1 quarterfinals as an unseeded sophomore in 2019.

Alicen Liu, Novi: The Wildcats standout is 19-3 and seeded third at No. 1 singles, with losses to Miller and Angell along the way but the latter in three sets.

Grand Rapids Forest Hills Northern: The Huskies have won 10 championships and finished runner-up six times over the last 19 seasons, and are the reigning champs after edging Seaholm by two points in 2019. All eight flights this time are seeded third or higher, and six flights carry top seeds. Abby Siminski (1), Isabella Paul (2), Alexis Pena (3) and Nathalie Lanne (4) all fill the top lines of the bracket in singles, with Sophie Richards and Rhea Marwaha the top-seeded pair at No. 1 doubles and Mitra Bijoy and Ryan Morey top-seeded at No. 2. Siminski was the runner-up at No. 1 in 2019 while Paul was the champ at No. 3 and Pena the winner at No. 4. Siminski is 16-0, Paul and Pena both 24-0 and Lanne 25-0 this season.

Bloomfield Hills Marian: The Mustangs finished third and only five points off the lead in 2019, and they’re seeking their fourth title over the last 11 seasons and first since 2016. All eight flights are seeded this weekend, with big points expected in doubles. Marcella Zarouk and Meghan Sharkey are the top seed at No. 4, with Jackie Ambrose and Emily Anton the second seed at No. 3 and Gabi Saba and Keely Nykerk the second seed at No. 2.

East Grand Rapids: Most recently the champion in 2017, EGR is another frequent contender coming back from a fourth-place finish in 2019. Five flights are seeded, with No. 2 doubles pair Jennifer and Julia Ernst set up to advance the farthest among the group.

Sullivan Patel, Birmingham Groves: The third seed at No. 1 singles is 21-2 with those defeats to Siminski and a Division 1 contender. She was the sixth seed at No. 1 as a sophomore in 2019 and reached the quarterfinals before losing to Siminski in three sets.

Helaina Pietrowsky, Grosse Pointe North: The Norsemen sophomore is the fourth seed at No. 1 singles for her first Finals, and carries a 16-4 record with all four defeats against players in the Division 1 bracket this weekend.

Romika Shokohi, Mattawan: After finishing runner-up at No. 3 singles as a freshman, Shokohi will wrap up her junior season entering the weekend as the second seed at No. 1 and with a 24-2 record. Her most recent loss was to Siminski.

Bloomfield Hills Cranbrook Kingswood: The Cranes are favored to take the next step after finishing runner-up to Country Day in 2018 and 2019. Cranbrook enters the weekend with six top seeds and a second – and the lone unseeded player, junior Nina Govila, returns to No. 1 singles after finishing runner-up at that flight in 2019. Junior Charlotte Brown – the No. 4 singles champ two years ago – is the top seed at No. 2, followed by freshmen Sienna Ilitch on the top line at No. 3 and Olivia Zhang as the favorite at No. 4. Morgan Dresner-Hagman and Mia Frickey are top-seeded at No. 1 doubles, with Abby Foltyn and Gaby Levine tops at No. 2 and Daryn Krause and Kayli Lala on the top line at No. 3. Brown and Ilitch both have only one loss this season, both to Division 1 contenders.

Detroit Country Day: The Yellowjackets have won four straight Division 3 championships and enter the weekend seeded at all four singles flights and three doubles flights. Senior Julia Fliegner was the No. 1 singles champ as a freshman in 2018; she’s undefeated this spring and the top seed at her flight. Junior Lana Haddad is the third seed at No. 2 singles and was part of the No. 2 doubles championship pair in 2019.

Chelsea: The Bulldogs are seeking their first top-two finish and could make a big move after tying for eighth two years ago. Top-seeded Megan Boughton and Meghan Bareis at No. 4 doubles highlight six seeded flights overall, also including second seeds Mia Loveland and Adrienne Delong at No. 1 doubles and Anne-Marie Begola at No. 4 singles.

Aly Aldrich, Otsego: The freshman fourth seed at No. 1 singles is 20-2 with both losses to Allegan’s Regan Fales (see below) before she won their most recent match.

Julie Gurne, Pontiac Notre Dame Prep: The Fighting Irish freshman is the second seed at No. 1 singles, with all of her losses either to Fliegner or contenders in Divisions 1 or 2.

Bloomfield Hills Academy of the Sacred Heart: The Gazelles jumped from No. 4 to the top spot in the final coaches poll as they pursue a third-straight championship and fifth in six seasons. They are seeded at all eight flights with the top seeds at the first three doubles flights led by Marisa Nafso and Kayla Nafso at No. 1, Lulu George and Maggie Pulte at No. 2 and Noor Simon and Angelina Kakos at No. 3. Marisa Nafso was part of the No. 2 champion in 2019. Reagan Beatty is the third seed at No. 1 singles having previously won titles at No. 3 as a freshman and No. 1 doubles as a sophomore. Junior Isabelle Burg should provide another boost as the second seed at No. 2 singles.

Traverse City St. Francis: The Gladiators have finished runners-up three of the last five seasons and were sixth in 2019. A strong singles lineup leads six seeded flights. Alexi Lewis at No. 2 and Jillian Sodini at No. 3 are top-seeded, while Mary Chittle at No. 4 and Lilly Bobrowski at No. 1 are second seeds. Lewis and Sodini are undefeated this spring.

North Muskegon: The Norse have seven times been Finals runners-up and like St. Francis are seeking a first championship. Six flights are seeded, led by a pair of second-seeded doubles pairs: Marilyn Gaston and Greta Goszkowicz at No. 4 and Gabby Gaston and Sarah Muzzy at No. 1. Senior Alicia Hall is 22-3 and seeded fourth at No. 1 singles.

Ines Latorre, Elk Rapids: The sophomore standout is the sixth seed at No. 1 singles but with her only losses (three) all to Bobrowski.

Moorea McNalley, Clarkston Everest Collegiate: The Mountaineers’ junior is 28-0 and the top seed at No. 1 singles after also winning the flight as a freshman in 2019.

Igne Savickas, Ann Arbor Father Gabriel Richard: Four of her six losses this spring as a senior have come to McNalley, Beatty or Notre Dame Prep’s Gurne, part of a resume that earned her the fifth seed at No. 1.