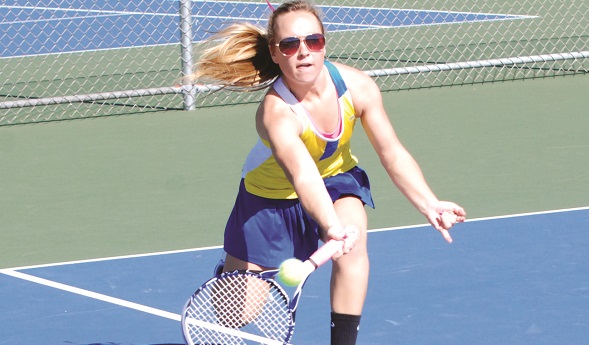 KINGSFORD — There were tears of sorrow, then tears of joy among some Kingsford High School tennis players as they were crowned MHSAA Upper Peninsula Division 1 champions with 18 points Wednesday.

Negaunee, which shared last year’s title with Kingsford, was runner-up this time with 14. Third-place Escanaba had nine.

Kingsford reached the title round in all eight flights, but won only two.

“It was kind of bittersweet,” Kingsford coach Mark Shanks said. “None of our eight seniors won their flights. My daughter’s No. 1 doubles (seniors Anna Shanks and Kate Lamy) and No. 3 singles (senior Santina Bianco) went down today. This was the first loss in more than two years for Santina – although our three juniors won.

“We talked all week since the GNC (Great Northern Conference) meet how the U.P. Finals would be a different situation with single elimination. Had any of our kids lost in the semifinals, it would have meant no points in that flight. Our biggest challenge was getting to the finals without zeroes. That assured us of scoring at least 16 points.”

Juniors Ali VanRemortel and Jaelyn Jennings provided the Flivvers with their first championship in No. 2 doubles, taking a 7-6 (8-6), 6-0 decision from Negaunee senior Kylee Taavola and junior Hanna Kantola.

“We tend to start slow, but we always stay positive,” VanRemortel said. “We just forget about our mistakes and play our game. We played a more conservative first set because we hadn’t seen them since the beginning of the season.”

Taavola-Kantola, often attacking the net early in the match, built leads of 3-0 and 4-2 in the first set.

They led for the final time at 6-5. But the Flivvers then tied the score by taking advantage of a pair of double faults prior to pulling out that set.

“It took a little while for us to adjust to what they were doing,” Jennings said. “They were playing very well. In the break between the first and second set, we could tell we were coming on and we weren’t going to let up. It’s awesome to feel this way. There was definitely some pressure coming in here as the favored team. We knew everybody was coming after Kingsford.”

“We were about even (in ability) and hustling after the ball really helped,” Walters said. “I’ve gotten better at recovering after every play. Thankfully, I was able to keep returning the ball. I knew I had to bring my A game. It’s tough to play Abbi because she’s very good with her placement of the ball, and her shots are hard and solid.”

Negaunee junior Allison Carlson finished a perfect season with a convincing 6-2, 6-0 victory over Kingsford senior Hannah Tresedder in No. 1 singles.

“I just tried to be consistent and be in position when she came to the net,” said Carlson, who also plays hockey for the Marquette Sentinels travel team. “She came to the net a lot, so I wanted to hit the ball deep. She’s a good player. It’s always a good match when I play her.” 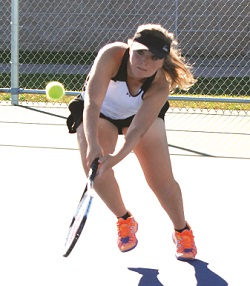 “As a whole, I’m proud of our girls,” said Negaunee coach Kyle Saari. “We knew it was going to be a battle with Kingsford. Anytime you have seniors in the U.P. Finals, you never know what’s going through their minds with this being their last high school match. For Angie to come here as a sophomore and beat a senior who hasn’t lost in more than two years is a great effort on her part. Allison is a true athlete. Athletes like her know how to grind a point out. They just find a way to get the ball over the net.

“We have a fairly young team and (we’re) pleased with being runner-up. You’re dealt a new hand every year, and that’s what’s fun about high school sports.”

“We kept playing strong this year,” said Berquist, who teamed with Gregoire for the No. 4 doubles crown last season. “This is very different from No. 4 doubles because it’s a lot harder. The team we just played has been in No. 1 doubles since they were sophomores. We just found a way to push through it.”

This marked the first time in five meetings this year the Berquist-Gregoire duo beat Shanks and Lamy.

“We went three sets with them in the GNC meet (on Sept. 25),” said Gregoire. “The first time we played them, they blew us out of the water. Since then, we had gotten a little closer each time. The momentum we gained from winning the first set was huge. This is the best way to end my senior year, for sure.”

“A lot of it is we’re learning to relax and take it one point at a time,” said LaForest. “The will for us to win this after beating them in the GNCs was huge. We kept telling each other and ourselves we could do it. This may be a game of physical challenge, but much of it is mental.”

“We just wanted to be a little more patient,” she said. “We tried to let the game come to us. It’s really fun playing with Olivia. She keeps my spirits up when I’m down, and I try to keep her spirits up when she’s down.”

PHOTOS: (Top) Kingsford's Anna Shanks sends a shot back toward Negaunee during the No. 1 doubles semifinal match on Wednesday. (Middle) Escanaba's Johanna Snowden swoops in to defend a spike from Menominee's Molly Jackson during their quarterfinal match at No. 1 singles. (Photos by Keith Shelton for Second Half).