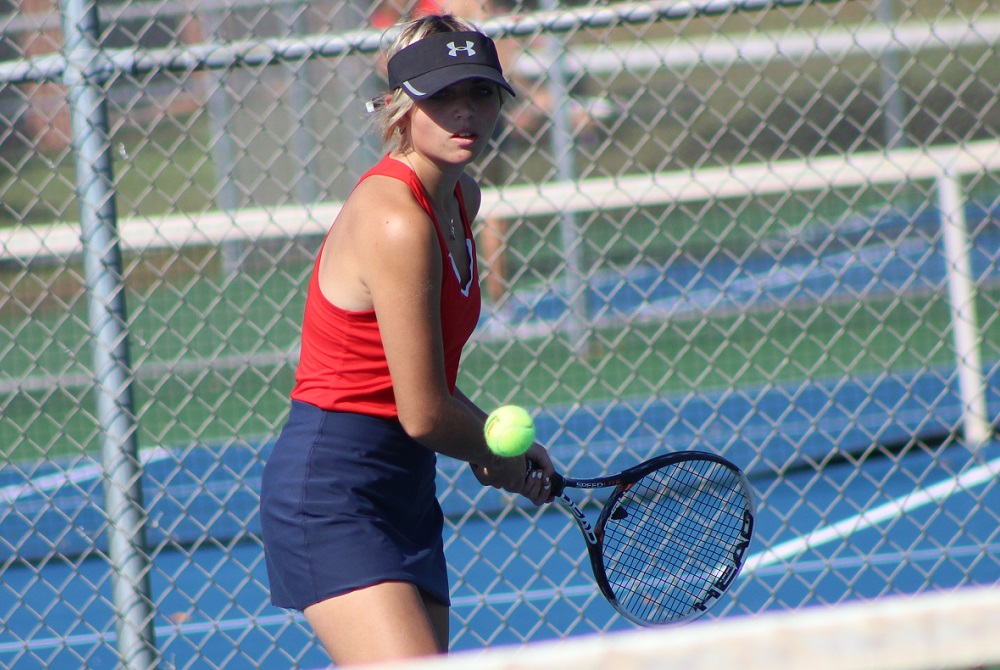 They were followed by 2020 champion Negaunee with 15, Escanaba 12, Gladstone four, Marquette and Menominee two apiece and Kingsford.

This marked the 13th title in 18 years for the Patriots, who competed in Division 2 until last year.

“This was a fantastic finish for us,” said Westwood coach Sarah Massie. “We felt we had a chance, but we knew there would be a lot of battling. Playing against the bigger schools is more challenging and unpredictable.

“Keeping a level head and knowing that we knew how to play tennis were the keys for us today,” said Prophet, who won at No. 4 doubles as a sophomore in 2019. “Tennis is such a mental game. In the first set, we were confident in our shots. We hit good shots and didn’t make many errors. They weren’t hitting their shots in the first set, then they settled down and started to find their groove.

“It feels great to win as a team, especially after all the work we put in which got us to this point.”

Blanck had similar thoughts on the championship match.

“Coach told us to be patient,” she said. “In the first set, we were pretty confident. Although, we never lost our confidence when they started to come back.” 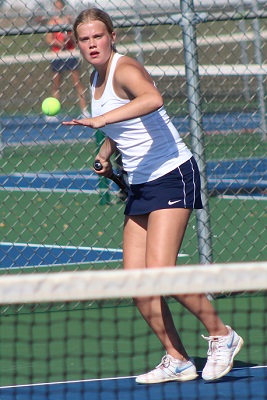 Freshman Lexi Olson and Alyssa Prophet came through for the Patriots in No. 2 doubles as they rallied past Escanaba senior Erica Moore and junior Delaney McIntrye 6-1, 3-6, 7-6 (7-5) for their title.

Moore and McIntyre led 5-2 in the third set after Moore’s overhand shot landed just inches in front of the back line.

“We knew it was going to be hard,” Prophet said. “We also knew we had to keep fighting. We beat them in the first set and knew we could beat them again. Coach told us it wasn’t over and not to give up until it was over. It’s going to feel great to return as defending champions.”

The Patriots surged ahead 6-5 before Moore-McIntyre got the next point to force a tie-breaker.

“Coach told us to get our heads back in the match,” said Olson. “Once we got within 5-4, we felt we had the momentum. We were a little nervous going into the tie-breaker but came through. That was very special.”

Senior Hannah Mattila and freshman Hannah Niemi added a first for Westwood at No. 3 doubles in a 5-7, 6-0, 6-3 comeback against Negaunee’s Madison Frustaglio and Olivia Luseth.

“My groundstrokes worked well today,” said Nelson. “My main goal was to stay consistent. I knew I had to stay strong mentally. The hardest thing about this sport is to keep from getting into your own head. This is the first time I won singles. I really had to work hard to get here.”

Senior Lizzy Sliva provided Escanaba with its lone title at No. 3 singles in a 6-2, 6-4 victory over Westwood’s Mallory Leece.

“I stayed focused on what I was doing,” said Sliva. “The second set got close, but I pulled through.

“It feels great to end on a high note. Everybody worked real hard. We have a lot of good girls playing. They gave it their all.”

PHOTOS: (Top) Westwood's Natalie Williams winds up to return a volley during the No. 2 singles championship match Wednesday. (Middle) Negaunee's Lilly Nelson prepares to return a shot during the No. 1 singles finale. (Photos by Matthew McCarthy.)