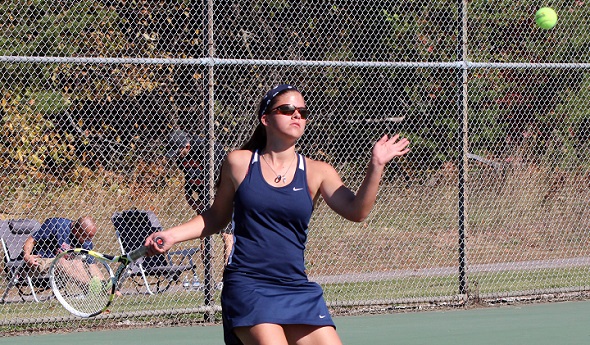 By Craig Remsburg
Special to Second Half

“We just have good player participation,” he said after his Patriots totaled 14 points to beat runner-up Iron Mountain by one Wednesday. “This is the biggest ‘team’ victory out of all of them, though.”

“I’m just drained,” Jackson said. “This was the most tense finals out of all of them.”

Westwood’s No. 3 doubles team of Lacey Pietro and Olivia Derocher, its No. 4 doubles tandem of Emily Carlson and Jamee Ferris, and Rachel Anderson at No. 4 singles all won titles.

Jackson said his No. 4 doubles unit, which rallied to knock off Hannah Hakamaki and Grace Hansen of Iron Mountain by a 3-6, 7-5, 6-2 count, was a key to the win.

Anderson added a No. 4 singles crown to her resume after winning at No. 4 doubles last season.

“It was great to be a No. 4 doubles champ, but this one is better because I did it on my own.”

Jackson said his team’s victory came from other factors as well.

“Our No. 3 doubles are both seniors and got our finals started,” Jackson said. “It was our first finals win (of the day).

“Megan Chapman got into the semis and got us a point, and Caitlin Hewitt (at No. 2 doubles with Gabby Hebert) picked up points playing with a leg injury. Caitlin had been playing No. 1 singles until her injury three weeks ago. She was able to contribute at No. 2 doubles, and it’s a case of a senior sacrificing for the better of the team.”

Iron Mountain claimed wins at No. 1 singles with Katie Brule, No. 2 singles with Olivia Truscott and No. 2 doubles with twins Katie and Emily Bugni. 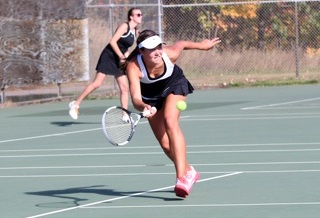 “It was a very hard match,” Brule said of her 7-6 (7-5), 6-2 win over Ironwood’s Katie Piispanen. “She hit the ball well, placed it well and made me run. But my overheads were good and so were my serves.

“I stayed consistent in the tiebreaker and didn’t get frustrated. I felt better about things after winning that.” she added, noting she won a U.P. title at No. 2 singles in 2012.

“My ball placement was good, my serves were ‘on’ today and I came to the net a lot,” Truscott said. “(Olson) hits everything back to you and my approach shots had to be good. I just had to attack.

“In the second set,” Truscott added, “I had to slow it down and just try to get my shots in.”

The Mountaineers’ Bugni sisters, who won a peninsula crown at No. 3 doubles last season, knocked off Westwood’s Hebert and Hewitt, 6-1, 6-3.

“We had to get each other’s confidence up. Those (Westwood) girls are good,” said Emily, 45 minutes older than her twin.

Added Kate: “We hit the ball well, and communicated well. I was also good at the net.”

“It seems to be our scenario: we come up one match short of making everyone happy,” Stegall said. “It’s disappointing to come up one point short.

“But I have a good group of sophomores — five are coming back. It’s a pleasure to work with them.”

“We had to fight for it,” Begalle said. “This was only our second time playing together.

Added Pallin: “We took our time and placed our shots well. We weren’t rushing.

“What a way to end our senior year. This was (coach Annette Burchell’s) first time with a flight winner in the U.P. Finals (in her 10 years of coaching).”