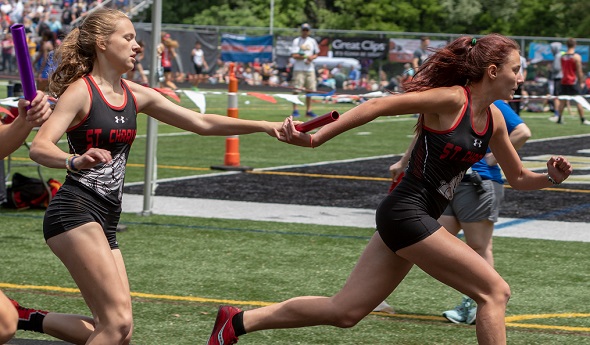 By Jeff Bleiler
Special for Second Half

COMSTOCK PARK – Put the Hart and St. Charles teams together, and you’d have had a runaway winner in the Lower Peninsula Division 3 Track & Field Finals on Saturday at Comstock Park.

Hart’s dominance in the distance events and St. Charles’ performances in the sprints would have made it difficult for any other team to challenge for the title.

As it was, each team’s strength countered the other to near perfection as Hart and St. Charles tied for the Division 3 championship with 46 points, earning both their first MHSAA Finals title in this sport.

They finished 10 points ahead of third-place Onsted, which closed the gap by placing fifth in the final event, the 1,600-meter relay. Neither Hart nor St. Charles fielded a team in that event, and Onsted entered it 14 points behind with only 10 available to the winner – so the championship had been decided before that last race even got started.

Both Hart and St. Charles’ coaches were pleased with the shared championship, the first time that’s happened in Division 3 since Laingsburg and Monroe St. Mary Catholic Central split the crown in 2003.

“We had an idea we’d have a chance if we used (junior) Adelyn (Ackley) in three events but didn’t know where she’d end up,” said Hart coach Mindy Whitney, who actually inserted Ackley into a fourth event, which proved critical.

Ackley – who led the cross country team to the LPD3 title in the fall as well – won the 3,200 in 10 minutes, 45.54 seconds; finished runner-up in the 1,600 to Hanover-Horton’s Judy Rector; and placed sixth in the 800, all that after anchoring the winning 3,200 relay in the day’s first event. Alayna Ackley, her older sister, led off and sophomore Brenna Aerts and freshman MacKenzie Stitt filled the second and third slots, respectively, as the relay finished in 9:32.67.

Alayna Ackley also provided valuable points by placing third in the 3,200 despite coming back from a stress fracture injury just last month. The 3,200 was a boon of points for Hart, which picked up 20 in that event alone as the third Ackley sister, freshman Savannah, was fifth.

Whitney said her brother was keeping tabs on the team scoring but after the completion of the 3,200, she thought they came up a point short.

The same could be said for St. Charles, which did its damage in the sprints. Najiyah Holden did the most by winning the 200 in 25.61 seconds, finishing third in the 100 in 12.73 seconds and running the first leg of the winning 400 and 800 relays. The other members of the relays were freshman Hope Kushion and sophomores Erica Garcia and Celine Whiren.

Coach Andre Williams was especially pleased with the 800 relay team’s time of 1:44.97, which broke by three seconds the school record.

“I’m satisfied with (sharing the title),” he said. “After the 400 relay, I knew we had a shot. I told Najiyah she had a shot at winning the 200, and she did. We just don’t have any distance runners.” 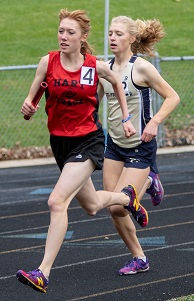 Sprinter Jenna Odykirk of Farwell put to rest previous struggles at the Finals by winning the 100, edging reigning champion Shiyon Taylor of Parchment by two hundredths of a second, and finishing runner-up in the 200.

Odykirk, who finished a disappointing 16th in the long jump, took solace with her finishes in the sprints after she missed the finals in 2017 in the 200 by one spot and was a distant 16th in the 100.

“I didn’t do too well in the long jump, but I had decent times in everything else,” said Odykirk, whose time of 12.63 seconds in the 100 was a personal best.

“Next year, my goal is to be state champ in the 200 and the 100, do better in the long jump and run in the 400,” said Odykirk, who qualified this year for the 400 after finishing sixth in the event at last year’s Finals. She opted not to run it Saturday.

In the field events, the shot put provided some late fireworks as Beaverton senior Alicia Aldrich and Clinton’s Amanda Schaare put on quite a show.

In her final attempt with Aldrich on deck, and with the crowd slow clapping as she readied, Schaare heaved it 43 feet, 9¼ inches to move into first. The crowd gave Aldrich a similar slow clap, and she responded with a launch of 44 feet, 7½ inches to take the championship.

“I was like shaking a lot,” Aldrich said. “It feels really great. I wasn’t expecting that at all. The competition really makes you want to throw it farther. I got nervous when I saw Amanda throw it, but then I heard the atmosphere and it pumped me right up.”

Aldrich, who just started competing in shot put last year, will continue in the sport at SVSU.

The runner-up finish for Schaare was not a disappointment as she already had repeated as the discus champion. Schaare won with a toss of 128 feet, beating Sheridan Dinsmore of Caro by six inches.

“(Repeating) was awesome; I really wanted to do that for myself,” Schaare said. “Words just can’t describe it. It’s a feeling that not everyone gets to experience. I just have the greatest support system.”

Schaare’s runner-up put was a personal record, beating the 41-9 she posted early in the season.

“I didn’t finish first in the shot put, but I’m OK with that because with the discus, that would have been icing on the cake,” said Schaare, who will compete in track for the University of Michigan.

VIDEO: Holden On For A Bulldogs Co-Championship

PHOTOS: (Top) A pair of St. Charles runners execute a handoff during a relay Saturday. (Middle) Hart's Adelyn Ackley, left, stays a step ahead during one of her relays. (Photos by Annette Tipton. Click for more from RunMichigan.com.)