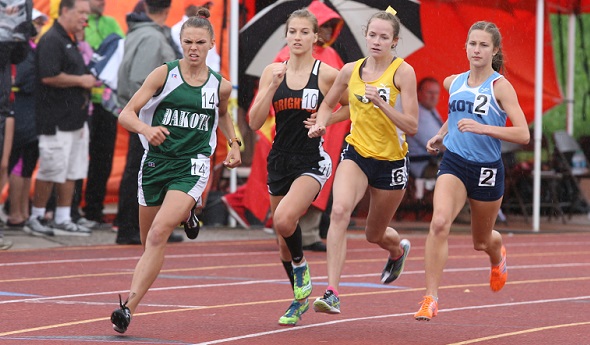 MACOMB TOWNSHIP – Look at Kayla Dobies and one can see a vibrant young woman with an engaging personality that locks on to those around her.

Look at Dobies’ accomplishments, athletically and academically, and one will marvel at her ingenuity and perseverance.

Hidden are ailments that would prevent a lesser person from achievements that flow from Dobies in a variety of forms.

Dobies, 18, is a senior at Macomb Dakota and has been accepted to Princeton University. In addition to her studies, Dobies plans on competing collegiately in cross country and track and field. The high jump is her best event – her best is a jump of 5 feet, 7 inches. But she is also a fine distance runner. Dobies placed eighth in Lower Peninsula Division 1 her freshman season in the high jump and was all-state again her junior season as she placed fourth in the 800-meter run.

Her best cross country time is 18:27, a school record. She qualified for the MHSAA Finals in cross country her junior and senior seasons but failed to place. The reasons will become obvious later.

For six years she practiced taekwondo and holds a first and second degree black belt in the sport.

As a junior she started a robotics team at Dakota, but did not compete. Although Dakota did not fare well in the state competition this year, the team competed at the world championships, a four-day event held in late April, in St. Louis, and won. The name of the team is the Thunder Chickens, and among Dobies’ responsibilities was as an assistant mechanic. When one of the machines broke down, she would assist in fixing it, thus earning the nickname, ‘Baby Chicken’.

Dobies has a 4.07 grade-point average entering her final semester and scored a 33 on her ACT. She was named a winner this winter of the MHSAA/Farm Bureau Insurance Scholar-Athlete Award and was one of six finalists for the recently-awarded Detroit Athletic Club Female High School Athlete of the Year.

She plans on entering the pre-med program at Princeton and possibly majoring in neuroscience.

As impressive as is her list of accomplishments, Dobies often has had to miss competing because of her illnesses. Every day Dobies confronts them. She tries to hold them off with daily medication, and sometimes even that doesn’t work.

Topping this list, Dobies is an asthmatic. Offshoots are the allergies from which she suffers. She’s also anemic and suffers from hypoglycemia, a blood sugar disorder. She can’t eat candy. She can only consume pure sugar. And she can’t eat fast food or pizza, or other like fatty foods because of their trans-fatty acids.

It’s the pizza part that upsets Dobies most, even as that seems like one of the lesser obstacles she continuously must hurdle.

“I have every type of asthma you can imagine,” she said. “I use a breathing machine at night and two inhalers every day. I get allergy shots. I’m allergic to mites. I have to have special sheets on my bed to help prevent an attack.”

The attacks continue to occur. The reason she did not compete in robotics her junior year was her health. Most days, Dobies is fine. The medication she takes helps combat her diseases, but it’s not foolproof. When the seasons change, Dobies suffers most.

A leg injury kept Dobies from possibly making all-state in cross country her junior year, and this past November she suffered an asthma attack at the MHSAA Finals. Though cross country and running in general is one of her favorite sports, fall changing to winter is the worst season for Dobies.

“When others are improving their times, my times get worse,” she said. “I was in the hospital a couple of days during the cross country season. When I have an asthma attack, it’s not fun.”

Because of her condition, Dobies prefers to run in warm weather – the hotter the better. That’s why she’s hoping for warm weather, at least warmer weather, Saturday when Dakota competes at the Division 1 Track & Field regional at Warren Mott. 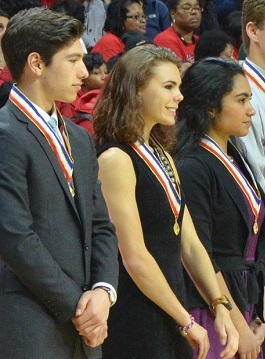 The spring didn't start well for Dobies. She suffered a pulled quadriceps (right leg) in the first meet of the season, and it wasn’t until three weeks ago that she could run the way she knows she can.

No one will doubt that she will. Dobies has always been highly motivated. This comes from her parents, Jeff and Jody Dobies, and she’s received a push from others including Dakota assistant track coach Tom Zarzycki. Jeff Dobies introduced his eldest daughter to soccer when she was 2 years old, and sports has been a big part of her life ever since.

“I watched the Olympics at Beijing and I saw the high jump,” she said. “I said, I can do that. So I asked my dad, what’s that? And he told me it was the high jump.”

Ever the inquisitive child, Dobies was inspired after viewing the Disney animated film “Mulan” to try martial arts.

“I’ve always liked sports,” she said. “I’m really, really passionate about everything. Take robotics and martial arts. I figure if you’re going to do something, do your best.

Whatever the task, whatever the challenge, anything Dobies dives into she gives it her best.

Her most recent project is experimenting with rats. It’s a class project, one she must complete to earn a grade. What she’s attempting to prove, with the aid of the rats, is that fear is innate.

“I’m still working on it,” she said. “I don’t expect to change the world.”