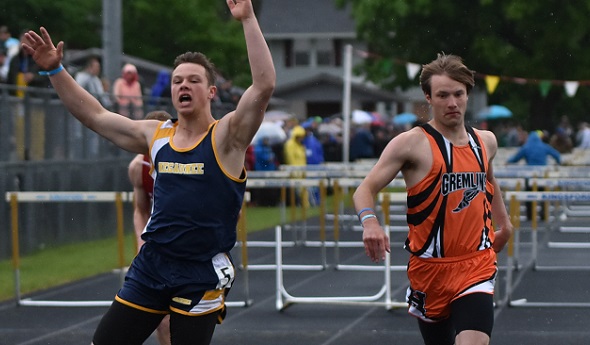 HOUGHTON — There was a time when hosting a track meet in early April was nearly impossible in the Upper Peninsula.

Meets comprised of four field events were held in the Sault Ste. Marie High School gym in the early 1970s, with similar type meets sometimes held at a few other U.P. schools.

Indoor tracks, however, weren’t available in the U.P. back then, and the long winters sometimes made it difficult to hold outdoor meets even in mid to late April.

On April 6, a majority of the Copper Country schools, plus Iron River West Iron County, Iron Mountain, Munising and Negaunee participated in an indoor invitational at Tech, where the top three finishers of each event reached the podium. Team scores, however, weren’t recorded.

“I think it’s really important that we got this meet in,” said Houghton boys coach Dan Junttila. “It’s nice that Tech does this for us. We got a chance to see what the kids can do, and the coaches get a chance to get times on them. With the weather being the way it is, you never know what you might get this time of year.”

This served as the season debut for every school entered except Munising, which opened at Eagle River, Wis., Northland Pines on March 23.

Many U.P. track athletes will travel to Marquette to compete in indoor meets at NMU within their respective divisions Monday, Tuesday and Wednesday.

Munising senior Michaela Peramaki took full advantage of her opportunity to compete in early-season meets, winning the girls pole vault with a school-record leap of 10 feet, 7 inches at Eagle River.

Peramaki then topped that effort last week by winning with another school-best jump of 11 feet at Tech, where one corner of the five-lane, 200-meter track is used as a runway.

“Vaulting here is not much different from any other track,” said Peramaki. “We had plenty of room.

“It’s so important to get a meet in at this time of year. This gives you a chance to work out the kinks. It’s a relief to finally get that (11-foot jump) under my belt. The guy running the vault gave me a few pointers, and I think my plant was a big part of my vault.”

The gym floor was used as a runway for high jump, won by Houghton’s Cara Monette at 4-10.

“I thought it went pretty good,” said Monette, who didn’t practice high jump this year until April 5. “I had to cram everything into one day. It’s different jumping from the gym floor. You get all the room you need, which gives you all the space to do what you want to do.”

“I thought it was great for us to get on a track,” said Chassell coach Marco Guidotti. “We saw a lot of encouraging performances. Our girls in the 4x800 looked real strong. We have some depth coming up. Karsten taking first in the boys 400 was also a real bright spot. It was nice to see some of our kids come through in the sprints and middle distances.”

“It’s different on a short track because it’s harder to pace yourself,” said Kinner. “I definitely ran more conservative (than on a 400 track). Although, we’re glad to get this meet in because we have a lot of new girls on our team.”

“We feel good about today,” said Wilson. “Our distances did well. Everybody ran well. This meet helps us a lot. This gets us in better shape for the Dome meet (Marquette Invitational on April 18).”

“We have 46 boys out, but still need to get an opportunity to see what they can do in competition,” said Junttila. “We want to see who’s going to respond to it. Leif Odegard (a junior) has been running in the shadows of our top-notch distance and middle distance runners, but he’s running excellent times. He’s really coming on.”

“I enjoy running the 60 more than the 100,” said Middleton, who will play football at Tech this fall. “I compare it to the 40. You can go full out, and I’ve got to get more explosion for football. It was good to get to see how fast the other people were and get a chance to run on a softer track.”

“Right now, we like to come to this meet, especially with the weather being so questionable all the time,” he added. “It’s nice and dry and nice and warm in here. You don’t pull any muscles. This is a nice meet to find out what we have in different events.”