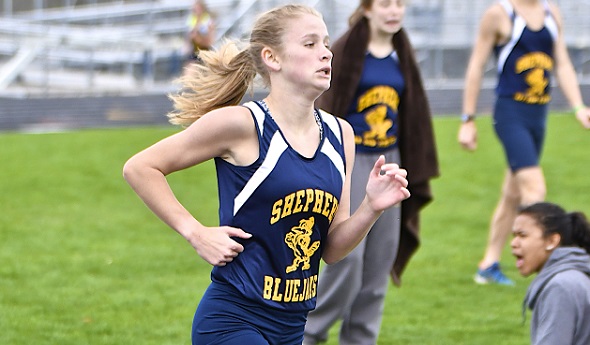 Midway through her high school career, Gall already is nearly the fastest cross country runner in Shepherd history, and she’s also on the cusp of rewriting the Bluejays’ track & field record book as well. She achieved her first all-time best on April 19, running the 800 meters is 2:14.83 on her home track to break the former school record, set in 1980, by more than a second – earning the Michigan Army National Guard “Performance of the Week.”

Gall finished third and then fifth, respectively, at the Lower Peninsula Division 3 Finals for cross country her first two seasons, and her personal-best time of 17:50 in the fall is only two seconds shy of Nora Green’s school record run from 1978. Gall finished LP Division 3 Track & Field Finals runner-up in the 3,200 last spring, running 10:52 to approach another school record run by Green (10:48). Gall also is the third-fastest 1,600 runner in school history with a best of 5:05, seven seconds off the record set in 2013 by Kaylie Rhynard – and both track milestones could be hers by the end of this spring. Last week's success gave Gall some ideas about how the 800 might fit into her plans – the time she ran to break the record would’ve put her second in that race at the Division 3 Finals last season. Gall also carries a 4.0 grade-point average, serves on her school’s student council and is active in a number of other school and church activities.

Coach Carey Hammel said: “She is a super kid who works extremely hard and is also a great student. She is very determined to be the best she can be and is a huge running fan. Getting to coach an athlete like that for two seasons (Hammel also coaches girls cross country) is very special because you always know what you are going to get out of her. She is also an incredible teammate in both sports and encourages both the boys and girls on our team to be their best. This year she is on the 3,200 relay with three seniors, and they are very close and she is very proud of what they are able to accomplish in that relay.”

Performance Point: “Beforehand, I was like OK, I want to go after this. I’ll run as hard as possible,” Gall said. “I started out the first lap a little slower than I normally do in 800s, and I was pretty nervous going into the second lap. But with 300 to go, I heard a voice, like God almost, that said, ‘Hey, you can do this. Just push.’ From there, I gave everything I had. I planned on starting faster; I don’t know if my legs were tight that first lap. I was nervous. I knew at a lap that I was slow, and when I finished I was a little shocked.”

Plenty of motivation: “I think that in the offseason, and even last year coming so close in the top five in cross country, being so close in track, it motivates me to work as hard as possible to get (to first). I’m gunning for one, a title, and I’ll work as hard as possible. My teammates motivate me so much. They’re always there right beside me, helping me with everything and the ups and downs of running.”

Following faith: “I believe I don’t do any of this by myself. I believe God is right there helping me though this. I wouldn’t be running, I wouldn’t be doing all of the things I’m doing if not for the gifts given me when I was born.”

Finding inspiration: “I'm one who loves motivational quotes, motivational videos, all of that. I decided one day to try to write a motivational essay for myself; I wanted to see if I could do it. I started writing those, and I actually really like it, just to read, by myself. The 2015 cross season, (I thought) maybe I’ll share this for the team. On overnights I’d always print one off, share it with the team, give them extra motivation to get through races. It was pretty nerve-wracking the first time – I thought maybe they wouldn’t be OK with a freshman doing that. I just took the chance, and I think my teammates like them.”

Mentoring and mentored: “I know a lot of the middle schoolers. They are speedy, and they’re just great people, and I just want them to become the best they can be. Because as a middle schooler, I had as my coach B.J. Tomanek. As a sixth grader, I didn’t know what to run, and he took me in. He expects me to do my best all the time, and he continues to motivate me today. We still run together, we talk, and he’s super motivational along with (coaches Rick) Cahoon and Hammel. They are strong people in my life I took up to, and (coach Wyatt) LeClear gets me through in tough times.”

PHOTOS: (Top) Shepherd's Amber Gall surges during one of her races last week against Alma and Standish-Sterling. (Middle) Gall rounds a curve during a race at Friday's Ithaca Invitational. (Click for more from HighSchoolSportsScene.com.)