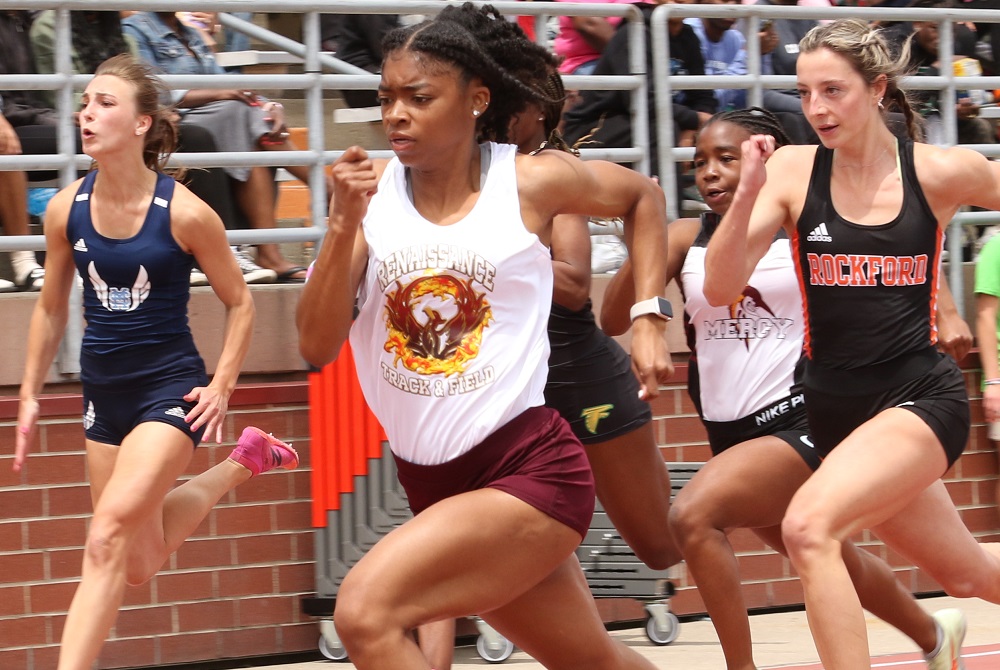 ROCKFORD – Before she even ran a race Saturday, Kaila Jackson had already established herself as one of the best sprinters in MHSAA history.

But in her final meet, she gave everyone at the Lower Peninsula Division 1 Track & Field Finals one final show.

The Detroit Renaissance senior won four Finals titles Saturday, repeating the feat she had accomplished in 2021, and led the Phoenix to their first Division 1 team title.

“The question was asked early in the season if I thought Kaila was one of the all-time great sprinters,” Renaissance co-coach Calvin Johnson said. “She solidified her legacy today. She solidified her legacy. With her going down to Georgia now to be a Bulldog, there’s nothing I can say but they’re getting a great athlete – a great student-athlete. It’s unfortunate they don’t have an MVP trophy, because she should get it, hands down.”

Jackson was responsible for 40 of Renaissance’s 80 points on the day. Three-time reigning champion Oak Park was second with 60. Ann Arbor Huron (55), Holland West Ottawa (47) and Ann Arbor Pioneer (38) rounded out the top five.

It was the first Finals title for Renaissance since 2007, when it finished a run of 10 Division 2/Class B titles over 11 seasons. The Phoenix were runners-up to Oak Park both of the past two seasons.

“It’s well overdue,” Renaissance co-coach Darnell Hall said. “It’s a good honor to finally get that monkey off our back. Especially with a good group of girls, the elite kids we have, this was the last thing they needed to solidify their legacy in the state of Michigan, was that Michigan state title.”

Jackson won the 100 meters and 200 meters and was part of the winning 400 and 800 relay teams. Olivia Jenkins, Madison Sheard and Jayla Graham joined Jackson on the 400 relay, while Jenkins, Chloe Vines and Jayla Dace joined her on the 800 relay. 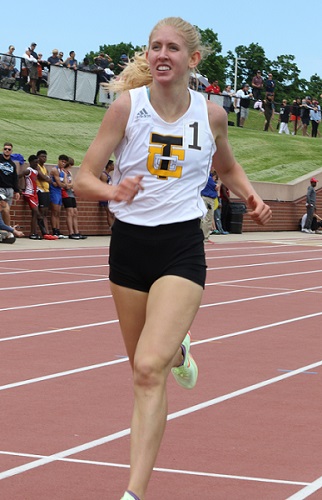 “It feels amazing to break a state record,” Jackson said. “I knew it was going to come, but I’m happy it came now. I worked very hard for this. I just feel so accomplished.”

“I really work hard for this,” Jackson said. “Everything paid off, all the hard practices, the crying, smiling, it’s paid off. I’ve worked very hard.”

Oak Park had three champions on the day, led by Morgan Roundtree’s record-breaking performance in the 300 hurdles. Roundtree’s time of 42.38 broke the LP Division 1 Finals record of 42.64 set by Wyandotte Roosevelt’s Kyana Evans in 2017. Ann Arbor Huron’s Mya Georgiadis was second in the race at 42.52, also breaking the record.

Nonah Waldron won the 100 hurdles for Oak Park in 13.9 seconds, while Drelin Mapp won the long jump with a distance of 18 feet, 2.25 inches.

Two others joined Jackson in winning multiple individual titles on the day.

“I wanted to go out in my first lap, not crazy, crazy, crazy fast,” Flynn said. “I let myself ease into the competition a little bit, had girls in front of me. Then, I had the fear of getting boxed in, so then I just peaced out. I was trying to use my competition, I wanted to stay with them a little longer than I did, but I started to get in that inner lane, and I was like, ‘I don’t want to misstep and get DQ’d.”

Dexter’s Sophia Mettes repeated as champion in the pole vault, clearing 13 feet to hold off a tough field.

“Coming into this I was a little nervous, because I knew I had really good competition,” Mettes said. “Natalie Blake (Holland West Ottawa), I’m competing with her next year (at Michigan State), so I’m super excited. She’s been looking so strong. Brooke Bowers (Grand Rapids Forest Hills Central), she’s been looking great, too. I knew I had a lot to look up to, and I was feeling a little tired coming in, but it was a great competition. I just got nervous throughout the whole thing, but my adrenaline kept me going.”

Ann Arbor Huron won the 1,600 relay in 3:52.81 with the team of Mackenzie Robinson, Jada Wilson, Christabelle Obi and Georgiadis.

Pioneer’s Gabriella Newman won the high jump with a jump of 5-8.