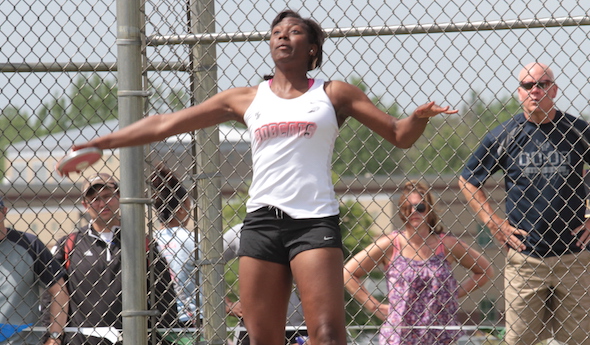 It was cold and rainy on April 29, 2016, and Grand Blanc’s Quiara Wheeler was scared.

The line to make to even have your throw measured in the discus at the Charlie Janke Track & Field Invitational in Jackson was 80 feet, farther than her personal best.

“I was really nervous, because I couldn’t throw very far,” she said. “I threw an 88-4 and was really excited. The week after that I started throwing farther in practice. (Grand Blanc throwing coach Garner Pleasant) and I figured out I was holding it wrong the whole season, then I figured out the hand placement and my footwork.”

After that, she took off.

Wheeler went from scared to be short of the minimum measurement to MHSAA champion in a little more than 30 days, throwing 136 feet, 2 inches on June 4 to win the Lower Peninsula Division 1 title.

“Sometimes they will get a big improvement in the disc because all of the sudden it just clicks,” Grand Blanc girls track & field coach Andy Taylor said. “But it usually takes at least a year or more to do that. To improve 50 feet from the end of April to the state meet, I’ve never heard of that.”

Wheeler improving her personal best by more than 60 feet in one season, and her quick ascension to the top of the state’s pecking order in the discus are actually easier to explain than you would guess.

It was a simple formula: extraordinary talent meets proper form – or close to it, anyway.

Wheeler doesn’t just throw for the Bobcats, she also long jumps, with a personal best of 16 feet, and has been on the sprint relays.

She holds a third-degree black belt in martial arts, and her coaches feel that background has helped her to quickly pick things up on the track.

“She’s used to putting in the work and having discipline,” Taylor said. “At the state meet, as she was throwing, I happened to look right in her eyes, and you could tell that she was totally focused.”

Before the Kensington Lakes Activities Association meet, Pleasant decided to add a full spin to Wheeler’s arsenal. She faulted three times, however, and did not record a throw.

“I told her, ‘Forget about it, put it behind you,’” Pleasant said. “When we get ready for the Regional, we’re going to do the South African (technique). At the Regional, she throws the discus 120 feet with a legal South African, and that had to go about 150 feet straight in the air and dropped.

“We had two weeks before the state meet, so all we did is work on the full rotation. That’s all we did for two full weeks.” 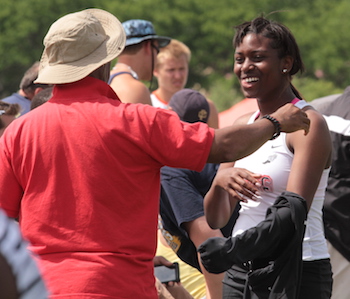 The new technique helped Wheeler reach 132 feet in the preliminary rounds of the Division 1 meet, easily putting her into the Finals.

Still, the newcomer to the big stage felt the nerves.

“When it came to the Finals, I was by myself and I was trying to calm myself down the whole time,” Wheeler said. “It was kind of overwhelming at first because all of the girls were so good and I was like, ‘How did I make it to the Finals?’”

Wheeler won by five feet, with no one else topping even her preliminary throw.

Her rapid rise caught the eyes of college coaches, and she said she has scholarship offers from Western Michigan University and Heidelberg University in Ohio. Taylor said college coaches are excited about how much more she can grow.

“I actually never really thought about (throwing in college),” she said. “This was before I was good. When the season was going on, I realized maybe I can do this. But I definitely want to continue this in college.”

Pleasant and Taylor both feel Wheeler is only beginning to tap into her potential as a thrower. She’s dedicated her offseason to getting better in the discus, which doesn’t bode well for those trying to catch her.

“I’ve just been training every day, pretty much since October – I also trained in the summer,” she said. “I’ve been lifting weights, and I’m definitely stronger than I was last year. I work out with two other boys, and they push me because they’re stronger than me. I go in and watch videos, footage of me sometimes and how bad my form was. Coming into the season, I’m hoping to be more consistent with my throws.”

Wheeler doesn’t seem worried that she’ll now have a target on her back as the returning Finals champion. In fact, she’s excited to beat her previous achievements, which is what drew her to track in the first place.

Pleasant has her aiming for the stars.