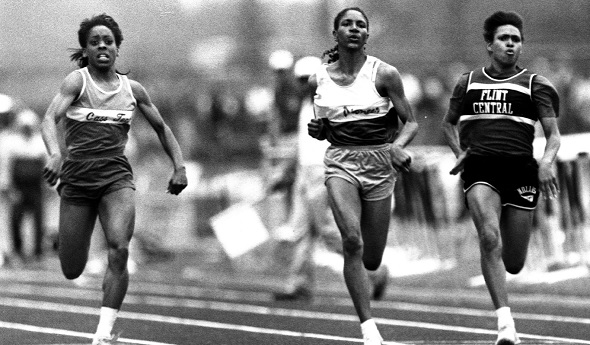 Ann Arbor Pioneer owns an MHSAA-best 16 team championships in girls track and field, including a string of seven straight won in Class A from 1985-91.

The Pioneers answered arguably their toughest challenge of that run in 1989, against a Detroit Cass Tech team featuring a record-setting long jumper and a sprint field that remains one of the most star-studded in MHSAA Finals history.

Pioneer won the June 3, 1989, meet at Eastern Michigan University with 70.5 points to Cass Tech’s 58 and Flint Central’s 33.5. The main event for the second straight season was the 100-meter championship race matching the standout athletes from all three top-placing teams.

Braddock also won the 200 and ran on the victorious 1,600 relay at the 1989 Final, and finished her high school career with four individual and three relays championships. Verdun also finished runner-up to Braddock in the 200 in 1989, but did win the 100 as both a freshman and sophomore in 1986 and 1987, respectively.

Johnson ran on the winning 400 relay, but left her lasting mark by claiming the long jump title in 19 feet, 8 inches – an MHSAA all-Finals record that continues to stand and was nearly 20 inches longer than the runner-up that day. Johnson also won the long jump the previous spring as a junior. Cass Tech finished runner-up six times during Pioneer's seven-season title string.

Click to see results from the 1989 LP Class A Final.