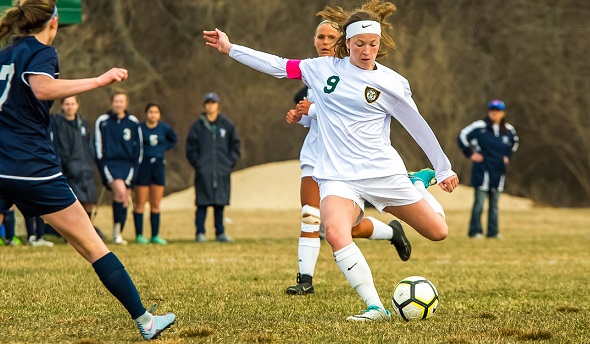 Talia Tyler has showed her competitive fire, really, since birth. But one really good example of how occurred when she was 6 years old.

She had just scored a bunch of goals in a youth game and her father, Jim – partially to keep her humble and partially to be the smart-aleck that he is – quipped to her tongue-in-cheek:

“Too bad you didn’t score any with your left foot.”

Later that day, little Talia was out in the yard with her soccer ball, shooting exclusively with her left foot. The next game, she scored all of her goals with her left foot, each time followed immediately by a glare to her father on the sidelines.

“I always try to challenge myself, in school and in sports, to be the best that I can,” explained Tyler, whose constant striving – not to mention her speed and smarts – has landed her a spot on the women’s soccer team at Columbia University, a Division I school in the Ivy League, located in New York City.

The immediate challenge for Tyler, the senior striker and leader of the Muskegon Catholic Central girls soccer team, and her teammates is to try and improve on last year’s run to the MHSAA Division 4 Semifinals – which capped the best season in school history.

Muskegon Catholic, which is 8-1 overall and a perfect 4-0 in the Lakes 8 Athletic Conference this spring, lost just three seniors off last year’s team which won the school’s first-ever girls soccer Regional title before bowing 2-0 to Kalamazoo Christian in the Semifinals.

Led by Tyler, the Crusaders have made winning the Division 4 championship their No. 1 goal this year.

Tyler, who has six goals and three assists so far, is joined up front by senior Lauren Doriot (who currently leads the team with seven goals), freshman standout Emily Olsen, sophomores Caitlyn Fodrocy and Payton Helton and junior A’lahna Cherry.

Kyra Tyler, a junior and Talia’s younger sister and the last of four standout Tyler athletes at MCC, is the top defender for the Crusaders – along with seniors Kasia Gasior, Roxy Hubl and Zoie Price, who is currently sidelined with a leg injury.

The final line of defense is one of the state’s best keepers in senior Isabelle Bertolone, although she rarely gets to show her ability in regular-season games as the Crusaders normally keep most of the action on the opposite side of the midfield stripe.

“We are loaded enough that we should make another run,” said second-year MCC coach Art Dorsey, who was notably frustrated after a narrow 2-0 victory Monday over conference rival Muskegon Orchard View. “We should be playing much better than we are. We need a little more hunger, a little more sense of urgency.”

Dorsey knows one of the biggest challenges in the entire state is just a few miles away in North Muskegon, which is undefeated and on a District collision course with MCC. 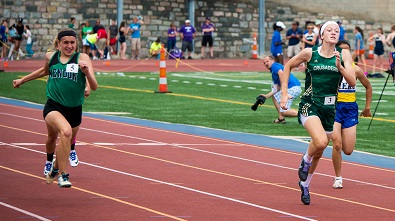 Tyler said the key to winning games in the postseason is mental.

“Girls soccer really comes down to which team shows up focused and ready,” said Tyler, who has served as her class president for the past three years. “Really, one of the biggest keys for us is staying healthy. We will keep working on it and getting better.”

Tyler’s tenacity and grit shines through in key moments in big games, but the first thing everyone notices about the 5-foot-6 senior is her speed.

Tyler is so fast that in her sophomore and junior years she ran track in the spring, in addition to her soccer. In her sophomore year, she finished eighth in the 200 meters at the Lower Peninsula Division 4 Finals. In her junior year, she qualified for the Finals in four events, but had to miss the meet to play in the Crusaders’ soccer District championship game.

Instead of on the track, Tyler used that speed throughout the tournament to make runs down the edges of the field and put major pressure on defenders. She finished her junior year with more than 20 goals and 20 assists.

“Talia has a complete skill set, and that’s what makes her the best soccer player ever at this school,” said Dorsey. “She can turn it on and get up to her top speed so quickly that it catches defenders off-guard. Then she is smart enough to make the right decisions going to the goal.”

Smarts is another trait that runs through the Tyler family. Talia’s older brother, Ian, plays football at Columbia and her older sister, Annika, is a club soccer player at the University of San Diego.

Talia has maintained a 3.85 grade-point average while taking a steady diet of AP classes and being a four-year varsity starter in both basketball and soccer. She also has racked up more than 200 service hours during high school, many on spring break mission trips.

Her final intangible, which she first displayed as the starting point guard on MCC’s varsity basketball team four years ago as a freshman, is leadership. On a team with plenty of young talent, Tyler is the veteran the other girls look to in crucial situations.

“Looking back to freshman year and everything that we’ve been through together, it’s kind of surreal that now it’s just down to this final sport and this final season,” Tyler said. “It’s great getting this chance to play with my friends and see if we can really leave our mark. That’s our goal.”

PHOTOS: (Top) Muskegon Catholic Central’s Talia Tyler (9) winds up to send the ball downfield during a game this spring. (Middle) Tyler (3) charges ahead during her heat of the 200 at the 2016 MHSAA Lower Peninsula Division 4 Finals. (Photos courtesy of Kristine Tyler.)