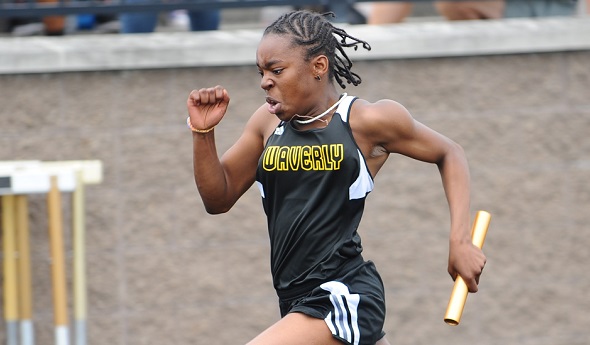 ZEELAND – Quite possibly the most diminutive athlete at the Lower Peninsula Division 2 Track & Field Finals on Saturday, sophomore Kayla Windemuller of Holland Christian twice fell to the track at Zeeland Stadium and twice got back on her feet, kept her composure and finished the 3,200-meter run before anyone else.

About an hour earlier, Windemuller won her first individual MHSAA championship, in the 1,600 run.

Nikole Sargent of Flint Powers Catholic also was a double winner taking first in the shot put and the discus. Sargent won the shot put last season as a junior, but said going into this meet that the discus event was a priority. Sargent failed to place in the discus a year ago, fueling her motivation.

Although Tra’chele Roberts of Lansing Waverly took home only one individual first-place medal, her performances helped her team earn the school’s first MHSAA Finals team championship, as it edged second-place Powers, 42 points to 40. Romulus was third with 31 points, followed by Grand Rapids South Christian with 26 and Zeeland East with 24.

Warriors coach Rex Wilkes, a Waverly graduate, is in his second season running the program and said he kept Roberts, one of three sophomores on the relay teams, out of the 200 dash in an attempt to save her for the relays.

“We didn’t expect this,” Wilkes said. “I was hoping to come out with some fast times. We got some unexpected points in the shot put. Tra’chele can score points on her own. The others can score in the Regionals and run in the relays.”

The other three athletes on the relay teams were sophomores Jazlynn Wilcox and Maya Garrett, and junior Teaghan Thomas.

“It’s very exciting,” Thomas said. “I’ve been at states three times. We’ve been together since the seventh grade. The same girls ran on the relays, and in the same order.”

Thomas led off, followed by Wilcox, Garrett and Roberts.

Last season Waverly also took first in the 400 relay, but no individual placed among the top eight in the 100 dash.

To Wilkes’ point, another factor in the Warriors; breakthrough took place in the field events. Sophomore Malin Smith was sixth after the preliminaries, then moved up to second with a final put of 42 feet. Smith also took fifth in the discus, an event in which she was seeded seventh. 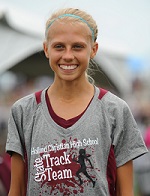 Windemuller was seeded first and third, respectively, in the 1,600 and 3,200 runs, so it’s not surprising she ran well Saturday. She did place seventh in the 3,200 and eighth in the 1,600 last season, so there was some valuable experience gained there.

No one could predict the events that took place and the circumstances that led to her taking first in both this time.

“”It made me super nervous knowing she was close by,” Windemuller said. “I was very tired. I gave it everything I had.”

That was small potatoes compared to her extraordinary effort in the 3,200. With approximately two laps remaining Windemuller, Sawyer and junior Erika Freyhof of Hamilton were bunched together at the front. Suddenly, all three fell.

The second spill took place with just over a lap remaining.

“I was in front,” Windemuller said. “When you go down you have to get yourself back up. It was a great learning experience.

Courageous athletes dotted the green artificial surface, home to both football teams at Zeeland East and Zeeland West. One competitor, in particular, is a multi-sport athlete who played four years of varsity basketball and was a two-sport athlete during the spring season.

Haley Hoogenraad of Zeeland West is one of the state’s top softball players. She will play for coach Carol Hutchins next year at University of Michigan. Hoogenraad competed in the 3,200 relay Saturday morning, then changed uniforms in a car as she was driven to Holland Christian to play in a Division 2 District Semifinal. West lost that noon game to Hudsonville Unity Christian, 12-4, allowing Hoogenraad to get back in a car to be driven back to Zeeland for the 800 run.

Hoogenraad was not just a qualifier in the event. She was seeded first, and as the race unfolded she moved up from fifth place to second with 200 meters left. Hoogenraad grew tired and placed fourth.

“I slid a few times and dove for a few balls,” Hoogenraad said of her time on the softball diamond. “I was dirty. I’m sad of the outcomes, but I tried. I tried to make my move (in the 800) and I said, oh, I can’t. I’m glad I had the opportunity to support my team.”

That would be teams.