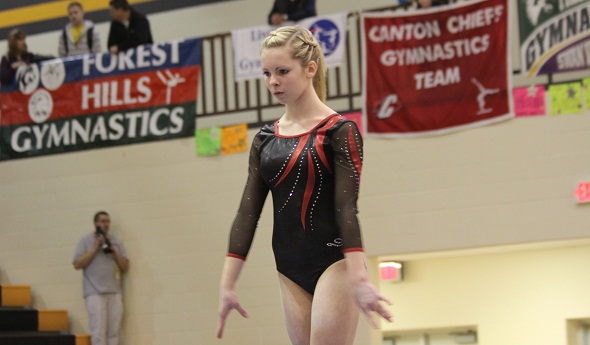 The most hopeful of MHSAA gymnastics teams have been forced to chase Grand Ledge for more than five seasons.

But of any Finals weekend during the Comets' half-decade run of perfection, this could be the one other teams make their strongest push to catch up.

Team Finals are Friday beginning at 2 p.m., with Individual Finals at noon Saturday – with both divisions running concurrently this year instead of at separate times as in years past.

Click for a complete list of qualifiers, Regional results and this weekend’s rotation schedules, and see below for teams and individuals who should make a run at the top.

Canton: The Chiefs definitely made Grand Ledge a little nervous last season on the way to finishing runner-up for the second straight, this time with a score of 148.575. And they no doubt are still on the Comets’ minds after nearly ending Grand Ledge’s five-year event winning streak by leading their Canton Invitational with one round left Feb. 2 – before the Comets moved ahead at the end. The Chiefs won their Regional with a score of 145.95, more than five points better than the field, and placed the top four Division 1 individual finishers at that event. Jocelyn Moraw, Maddie Toal, Melissa Green and Nicole Lasecki all posted scores of at least 35.650, and Erica Lucas was second in Division 2 with a score of 35.875.

Farmington: The Falcons similarly dominated their Regional, winning by nearly four points with a score of 142.95, and should climb after taking fifth at last season’s MHSAA Final. Farmington also posted an impressive home invitational win on Jan. 19, edging Canton by nine tenths of a point for that title. Farmington has one Division 1 all-around qualifier this weekend, freshman Carina Wright, plus placed four of the top five in Division 2 at that Regional.

Grand Ledge: The dynasty continues to rise. The Comets haven’t lost or finished second at an event since coming in as runner-up at the 2007 MHSAA Final – a stretch including five title wins and nearly 100 events total over the last five seasons. Grand Ledge won the Rockford Regional with a score of 149.325, 5.8 points more than the field and tops of all Regionals this season. Senior Sara Peltier and freshman Rachel Hogan both made the Division 1 individual all-around Saturday, while senior Lauren Clark and junior Presley Allison took the top two spots in Division 2 at the Regional.

Jocelyn Moraw, Canton sophomore: One of a strong group of Chiefs, Moraw won her Regional with a score of 37.150 that included a win on bars (9.2). She placed eighth in Division 1 last season with a score of 36.900 after finishing among the top nine on three apparatuses and the top 14 on all four.

Madi Myers, Rockford/Sparta freshman: She took last week’s Regionals by storm, beating the Grand Ledge contenders with a score of 38.925 – the best in any Regional this season. She finished first on beam (9.775), bars (9.85) and floor (9.7) and might be the gymnast to beat Saturday.

Sara Peltier, Grand Ledge senior: The Comets annually find a new standout to top the lineup, and Peltier took over this season for graduated Division 1 champ Christine Wilson. Peltier won the Division 2 championship last season with a score of 37.275, and finished second to Myers at the Rockford Regional with a score of 37.575 despite only an 8.8 on beam.

Abbey Robb, Birmingham senior: She could push into the mix after finishing second at the Troy Athens Regional with an all-around score of 37.15. She won vault that day with a 9.5.

Emma Abessinio, Grosse Pointe United senior: She competed in the Division 2 Final in two events last season, but should push for a strong all-around finish this weekend. She won her Regional with a score of 36.625, which included wins on floor (9.55), beam (9.275) and bars (8.9).

Presley Allison, Grand Ledge junior: She’s due to finish first soon after placing third both of her first two high school seasons. She was second to teammate Lauren Clark at the Rockford Regional with a score of 37.575 and won bars (9.45) and beam (9.675).

Lauren Clark, Grand Ledge senior: She should be the Division 2 individual favorite after finishing runner-up by five hundredths of a point last season with a score of 37.225. She won her Regional last week with a score of 37.800 and with first places on vault (9.6) and floor (9.5).

Andrea Merlotti, Salem senior: She should move up quite a bit after finishing 21st in the Division 2 all-around at last season’s Finals with a score of 33.625. She finished third at her Regional with a 35.800, with top-four finishes on three apparatuses.