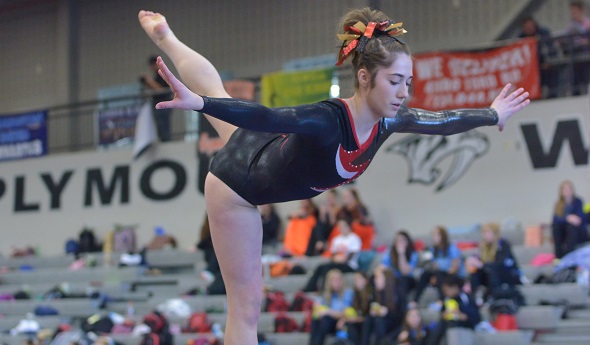 The Canton gymnastics team truly was a feel-good story in 2014 as it claimed its first MHSAA championship after three straight runner-up finishes, while ending Grand Ledge’s run of six straight titles.

The Chiefs are a likely favorite again Friday at Rockford High School – but nine of 12 other finalists are hoping to follow Canton and become the next first-time MHSAA Finals champion.

Team competition begins at 2 p.m. Friday, with the final rotation scheduled for 6:40 p.m. Individual competition in both Divisions 1 and 2 begins at noon Saturday.

Two-time Division 1 individual champion Christina Shabet graduated from Troy last spring. But Grand Ledge junior Rachel Hogan is back after finishing runner-up, and reigning Division 2 champion Cassidy Terhorst is back as only a junior. Read on for more on both and others who also should be in the hunt for individual titles, plus a number of teams that should be in contention Friday. Click for rotation schedules for both days of competition.

Canton – The reigning MHSAA champion won the most competitive Regional last weekend with the top Regional score anywhere this winter, 146.500, despite losing top 2014 all-around finisher Jocelyn Moraw to an injury midseason. The Chiefs still boast three Division 1 contenders and a Division 2 favorite among a strong group of contributors.

Farmington – Last season’s third-place Finals finisher also was a Regional champion at 141.600 and will return this weekend with four of six who competed in last year’s Final, along with a top freshman. The Falcons finished second to Canton at White Lake Lakeland’s Invitational in January.

Grand Rapids Forest Hills United – Last season’s fifth-place finisher should be in good position for another top finish with a trio of strong Division 1 gymnasts and the Division 2 reigning champion leading the way. Forest Hills Central finished second to Rockford at their Regional, scoring 143.925.

Grosse Pointe United – The Blue Devils are an intriguing possibility among teams seeking a first MHSAA championship. They finished second to Canton at their Regional at 144.375 after finishing fourth at last season’s Final – and return their top three all-around competitors from the 2013-14 team.

Plymouth – The Wildcats finished third to Canton and Grosse Pointe South at their Regional, but scored 143.500. Plymouth returns this weekend with both gymnasts who competed all-around when the team finished sixth a year ago.

Rockford/Sparta – This season’s host won its Regional by a point with a score of 144.925 and took four of the top six in the Division 1 all-around after missing the Finals last season. The Rams have won the MHSAA team title once – in 1989 – and have the star power at the top to make a run. They won the Canton Invitational in February ahead of both the host Chiefs and Grosse Pointe South.

Katie Fabian, Bloomfield Hills Academy of the Sacred Heart junior – Went from competing on one apparatus at the Regional as a sophomore to winning the all-around this season in 35.125 and taking first on beam in 9.150.

Rachel Hogan, Grand Ledge junior – Her team might not be among the favorites this time, but Hogan is the likely contender to catch in the Division 1 individual competition after she finished second by a tenth of a point a year ago. Hogan won vault and tied for first on bars at the 2014 Final, won floor at the 2013 Final, and claimed last weekend’s Regional title at 38.825 – with a 10.000 on vault, 9.500 on bars, 9.550 on beam and 9.725 on floor to finish first on all four.

Morgan Korf, Rockford/Sparta junior – Finished 11th and 18th in Division 1 her first two years of high school, respectively, and should surge after putting up a 37.175 all-around at her Regional to finish second to Hogan. She also took second in vault (9.600) and beam (9.550).

Margo Mekjian, Brighton junior – Finished second to Fries at their Regional with an all-around score of 36.400 and won the vault in 9.600. She finished 12th at last season’s Final among a strong group of contenders who all broke 36.000.

Haley Metz, Plymouth sophomore – Won her Regional in a school-record 36.950 and finished second on bars in 9.425. She took 13th in the Finals all-around as a freshman.

Madi Myers, Rockford/Sparta junior – The only Sparta athlete on the Rockford/Sparta co-op team, Myers finally will compete in a Finals after injuries derailed her first two opportunities. She finished third all-around (36.825) at her Regional and took second on floor (9.550), but won her Regional as a freshman.

Isabelle Nguyen, Grosse Pointe United sophomore – After finishing fifth all-around in the Final last season, took first at her Regional last weekend with a score of 37.575. She also won the vault in 9.500.

Maria Nguyen, Grosse Pointe United senior – Finished less than a point behind her sister, Isabelle (above), to take fourth at the Regional in 36.725 after finishing 14th all-around at last season’s Final.

Elisa Bills, Farmington freshman – The Falcons’ first-year standout finished second all-around at her Regional with a 35.000 and a pair of first places in the bars (8.800) and vault (9.000).

Lauren DeHaan, Lowell senior – Tied for 12th all-around at last season’s Final and should be a contender despite finishing fifth (35.575) in last weekend’s most competitive Division 2 Regional field, at Kenowa Hills.

Kelly Momber, Grand Rapids Kenowa Hills/West Catholic/Grandville senior – Won the all-around at her home gym with a score of 37.100 while taking first on beam (9.475) and floor (9.660). Momber tied for 12th all-around at last season’s Final.

Brianna Rhoad, Livonia Blue junior – Finished seventh and 15th in her first two MHSAA Finals, respectively, and should move up after taking second at last weekend’s Regional with a 35.775.

Marissa Schuh, Farmington senior – Came in 14th all-around at last season’s Final but should also move up significantly after taking first in the all-around at her Regional at 35.475 and winning beam with a 9.200.

Tiana Seville, Grand Ledge junior – After missing last season with an injury, Seville could finish this winter well after taking third at her Regional with a 36.125. She was first on vault at 9.500 and should be a favorite on that apparatus.

Cassidy Terhorst, Grand Rapids Forest Hills United junior – The reigning Division 2 all-around champion finished second at her Regional with a 36.825 but easily could push back to the top this weekend. She finished first on bars at the Regional with a 9.300 but can score high on various skills – she took three second places in winning last year’s Final.

Jessica Weak, Livonia Blue sophomore – Another top competitor from the strong KLAA, Weak finished eighth all-around at last season’s Final but was third at her Regional last weekend with a 35.725. She also took second on floor at the Regional with a 9.150.

Kacy Wolfram, Howell sophomore – With Walker, also played a big part in Howell’s first team Regional title and finished second all-around with a 35.325. She’ll should be in the mix on vault after winning that apparatus with a 9.500.