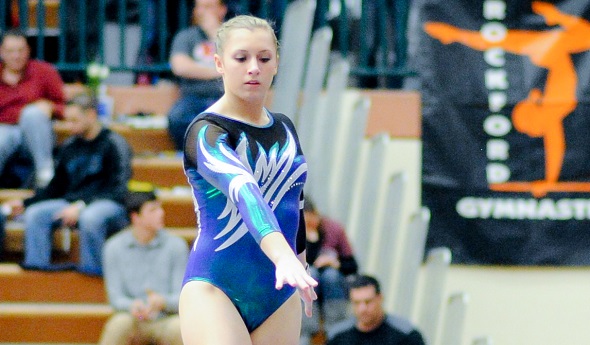 Rockford/Sparta enjoyed quite the MHSAA Finals weekend in 2015, claiming the first team championship since 1989, on its home floor, and the Division 1 individual title the following afternoon.

With their top gymnasts including that individual champion and another favorite back this weekend, the Rams arguably are favorites to pull off a repeat performance – although 2014 champion Canton has a similarly veteran lineup, and last season’s Division 1 individual runner-up and third place finishers plus the two-time reigning Division 2 champion all will compete for the same title this time.

Team competition begins at 2 p.m. Friday at Rockford, with the final rotation scheduled for 6:20 p.m. Individual competition in both Divisions 1 and 2 begins at noon Saturday.

Read on for a glance at a number of contenders who should be in the hunt, and click for rotation schedules for both days of competition.

Canton – Last season’s runner-up and the 2014 champion has five straight top-two finishes at the MHSAA Team Final. The veteran Chiefs won their Regional with a score of 146.425, the second-highest statewide last weekend. They also won the White Lake Lakeland Invitational ahead of a strong group. Canton took the second-through-fifth places at the Division 1 Regional with Katie Dickson, Kelsea Kemosek, Jana Hilditch and Stephanie Cox and got a third in Division 2 from Hailey Hodgson and a fifth from Rachel Socha.

Grand Rapids Forest Hills United – Forest Hills fell one spot back at last season’s Final from fifth in 2014 to sixth, but was fewer than two points from third place. A 144.825 Regional score was second to Rockford/Sparta but third statewide last weekend, and Forest Hills also won a dual meet against the Rams this season. Seniors Hannah Esterman, Cassidy Terhorst and Christine Byam all scored 36 or higher all-around at the Division 1 Regional.

Farmington – Last season’s fifth-place finisher was fewer than two points out of third as well, and won its Regional last week with a score of 144.675. Farmington is seeking its first championship since a three-peat for Tri-Farmington from 2004-06, and finished third at White Lake Lakeland behind Canton and Howell. Farmington has a pair of Division 1 seniors in Brooke Rabban and Carina Wright – Wright finished 10th all-around last season – and a strong Division 2 group.

Howell – The Highlanders finished fourth last season, less than a point out of third, and beat 2015 third-place Grand Ledge in winning last weekend’s Regional with a score of 143.65. Howell finished ahead of Farmington at Lakeland and won the Lakes division of the Kensington Lakes Activities Association before finishing fourth at the all-KLAA meet – and is a contender despite having only one Division 1 individual in senior Kirsten Phifer but also a strong group of Division 2 contenders.

Rockford/Sparta – The Rams won last season’s championship by 1.75 points over Canton. With a number of their top gymnasts back, led by seniors Madi Myers and reigning Division 1 champ Morgan Korf, they have to be the favorite – and especially after posting a statewide high 148.950 to win the Regional. Rockford/Sparta also won the Lowell Invitational, Kenowa Hills Invitational and Canton Invitational, ahead of Canton at two events and Forest Hills United twice as well.

Nicole Coughlin, Rockford/Sparta junior – She earned the sixth-place all-around spot at Kenowa Hills (36.200) but also was strong as a sophomore tying for fifth all-around at the Division 1 Final.

Katie Dickson, Canton sophomore – She finished 12th in Division 1 and second among Canton gymnasts a year ago, and led a strong group of Division 1 Regional finishers last weekend taking second (36.500) in her home gym with a second place on vault.

Morgan Korf, Rockford/Sparta senior – The reigning Division 1 all-around champion finished first last year despite not placing higher than third in an individual event; she could add titles in a few of those this time too after finishing second at the Regional all-around (37.775) and second on beam and bars.

Margo Mekjian, Brighton senior – After finishing eighth at the Division 1 Final last season, Mekjian should be in the mix at the top coming off an impressive Regional; she was second all-around to Hogan (37.200) and won floor (9.550).

Haley Metz, Plymouth senior – She should make a giant jump this weekend after finishing 15th at the MHSAA Finals in Division 1 last year. Metz won the Regional all-around at Canton with a score of 36.975 and was first on beam (9.375) and bars (9.450).

Madi Myers, Rockford/Sparta senior – Injuries derailed her postseasons early in her career, but she played a huge role in last year’s team championship and finished ninth in Division 1. She might be the individual favorite this time after finishing just ahead of Korf at the Regional with an all-around of 38.275 and first places on floor (9.725), beam (9.550) and bars (9.725).

Isabelle Nguyen, Grosse Pointe United junior – Last season’s Division 1 runner-up by only 75 thousandths of a point, Nguyen finished among the top 10 on all four apparatus and should make a run at a number of titles. She won the all-around at Walled Lake Central's Regional with a 37.700 and was first on floor (9.400), beam (9.400) and bars (9.700).

Kirsten Phifer, Howell senior – One of only two seniors on the Highlanders’ roster, Phifer finished 11th all-round in Division 1 last season and third at last weekend’s Regional with a score of 36.525.

Brianne Smith, Port Huron freshman – Smith is set up for a strong high school career coming into her first Finals after finishing second to Nguyen at their Regional (36.300) and winning vault (9.300).

Cassidy Terhorst, Forest Hills United senior – The two-time reigning Division 2 champion moved up for her final season and took fourth at the Regional (36.300) at Kenowa Hills.

Elisa Bills, Farmington sophomore – After finishing seventh at the Division 2 Final as a freshman, Bills is poised to move up coming off a Regional all-around title at Walled Lake Central (36.400) that included wins on floor (9.275) and bars (9.425).

Jacquelyn Farquhar, Farmington junior – She tied for ninth all-around at last season’s Final and also should make a move up this weekend. She finished second to teammate Bills all-around (35.525) and on bars at the Regional.

Maura Fitzpatrick, Lowell sophomore – She made the Finals on floor last season but is back all-around with a runner-up finish at Kenowa Hills (35.300) that included a first place on vault (9.175).

Hailey Hodgson, Canton senior – She’s finished fourth and fifth, respectively, at the last two Finals and came in third (35.725) behind Rhoad and Weak (see below) at this year’s Regional after two straight all-around titles at that level of the tournament.

Blake Hutchings, Linden/Fenton/Lake Fenton sophomore – A big jump is anticipated after Hutchings was 20th at last season’s Final; she won her Regional last week with a 36.650 and with first places on floor (9.525) and bars (8.950) and a second on beam.

Corah Kaufman, Lowell junior – The Red Arrows’ Regional champion last week entered this conversation with a winning 35.325 and a first place on bars (8.975) – she also took third on bars at last year’s Final.

Brianna Rhoad, Livonia Blue senior – After finishing sixth at the Final last year, Rhoad should be a favorite coming off a Regional championship at Canton against a strong field. She scored a 36.525 and won floor (9.675), beam (9.250) and finished second on vault.

Alyssa Walker, Howell junior – She followed up a Regional title and fourth-place Finals finish in 2015 by taking second to Hutchings last week with a score of 36.025.

Kacy Wolfram, Howell junior – She finished fourth at her Regional (35.500) but won the vault (9.55) and was eighth all-around at last season’s Final.