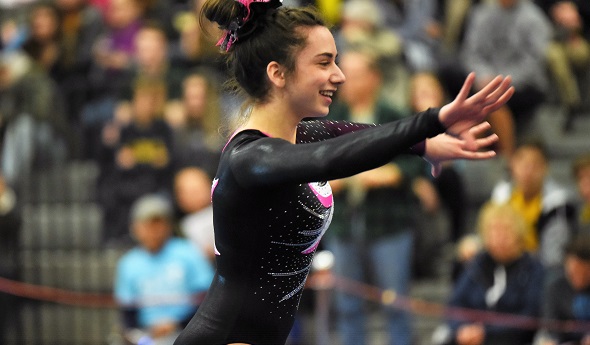 There’s a chance at this weekend’s MHSAA Gymnastics Finals for the reigning champion to become only the fourth school in state history to win four straight titles in the sport.

There’s also a chance we’ll celebrate a team winning for the first time in a dozen years or more.

Rockford, this weekend’s host, can clinch a fourth straight team championship at Friday’s Team Final. But 11 other contenders have an intriguing opportunity – Rockford, Canton, Grand Ledge and Holt are the only teams to win the title over the last 11 seasons, and the latter three aren’t in the field this time.

Saturday’s Individual Finals present some similar opportunities. The top six finishers in Division 1 from last season either graduated or will not be competing. Three of the top four won’t be back in Division 2 – although Farmington United senior Elisa Bills will return and attempt to repeat as champion.

Team competition begins at 2 p.m. Friday, with the final rotation scheduled for 6:40 p.m. Individual competition in both Divisions 1 and 2 begins at noon Saturday.

Below is a glance at a number of contenders, both team and individual, who could work into the mix this weekend. Click for rotation schedules for both days of competition.

Farmington United – Farmington won its Regional at Walled Lake Central with a score of 145.775 and will be looking to move up from fourth place at last season’s Final – and can boast a few more impressive wins this winter as well. Farmington won the 20-team Jeanne Caruss Invitational at White Lake Lakeland, and at the start of February won the Canton Invitational against a field including most of the top teams in the state.

Linden-Fenton-Lake Fenton – This co-op team earned its first trip to the MHSAA Team Final with a Regional title last weekend and record score of 143.575. In addition to claiming that title at Grand Ledge, LFLF won the Lakes Valley Conference championship and the Holt Invitational at the start of this season.

Livonia Blue – After finishing 10th at last season’s Team Final, Livonia could make a big jump after an especially strong final month of the regular season. Blue won its Regional at Canton with a 146.225, the highest Regional score in the state this season. It also won the overall league championship in the Kensington Lakes Activities Association – which has six of the 12 teams at this weekend’s competition.

Northville – A series of second places makes Northville look like a team ready to contend for first Friday. The Mustangs finished runner-up at the Holt Invitational, Caruss Invitational and Canton Invitational, plus at the Regional at Walled Lake Central with a score of 141.850. They did win the KLAA Black championship, and should rise from last season’s ninth-place finish at the Team Final.

Rockford – Only three years ago, Rockford won its first MHSAA team gymnastics title since 1989. Now the Rams are on the verge of a dynasty. Rockford will attempt to win a fourth consecutive title with a third coach during this run – first-year leader Michelle Ankney – and no seniors but with a strong group that has had plenty of success. Rockford won its Flip-Flop Invitational, Lowell’s Red Arrow Invitational and the Grand Rapids Kenowa Hills Invitational. The Rams also won their Regional at Kenowa Hills last week with a score of 145.600.

Hannah Biesbrock, Grand Rapids Forest Hills sophomore – In her first year of high school gymnastics, Biesbrock won the Regional championship at Kenowa Hills with an all-around score of 35.325 and first places in bars (8.8) and beam (8.875).

Nicole Bragg, Hartland junior – Bragg finished second at her Regional at Grand Ledge with an all-around 35.225 and a first place on vault (8.975).

Laine Cook, Jackson Lumen Christi senior – After winning the Regional all-around at Grand Ledge by nearly a point at 36.200, Cook could should improve on last season’s 16th-place Finals finish.

Aniessa Conway, Livonia Blue junior – After missing the all-around top 10 by a tenth of a point last season, Conway should be in the title mix coming off the Regional championship at Canton (36.575).

Elizabeth Maurer, Grand Ledge freshman – She finished fourth all-around at the Regional her school hosted, with a 9.6 to win floor that would have placed fourth at last season’s Final.

Erin McCallum, Northville senior – McCallum improved from 17th all-around as a sophomore to seventh in Division 1 last season, and enters her final weekend of high school competition after finishing third all-around at Walled Lake Central at 35.700.

Hallie Roman, Port Huron United senior – Also a Finals-qualifying diver during the fall, Roman could make a big move from finishing 12th last year after winning the Walled Lake Central Regional with an all-around 36.650 and first places on bars (9.075) and floor (9.475).

Reagan Ammon, Rockford junior – After placing 13th at last season’s Division 2 Final, Ammon is among favorites coming off a Regional win at Kenowa Hills; she scored 36.400 all-around and finished first on bars (8.85) and beam (9.375).

Elisa Bills, Farmington United senior – The reigning Division 2 champion also took first in beam, floor and vault last season. She returned from an injury this season to win the Regional at Walled Lake Central with a 36.900 and first places on vault (9.45) and bars (9.15).

Morgan Case, Rockford sophomore – Case took second on floor in Division 2 last season and is an all-around contender this time. She finished second to Ammon at the Regional with a score of 36.375 and first places on floor (9.55) and vault (9.5).

Ashley Faulkner, Rockford junior – Faulkner tied for 10th all-around in Division 2 last season and took fourth among four teammates at the Kenowa Hills Regional last week with a score of 35.475.

Nicole Graham, Huron Valley freshman – Graham would’ve qualified for all four events after finishing eighth of better in each at the Walled Lake Central Regional, but she also qualified all-around finishing third at 35.750.

Riley Fisher, Salem junior – Fisher scored 35.400 to win the Regional at Canton with second places on floor and beam; she tied for 17th on floor at last season’s Finals.

Taylor Gillespie, Howell sophomore – Gillespie was fifth in Division 2 all-around last season and should be in the mix again; she finished runner-up at the Grand Ledge Regional with a 36.450 and a first place on vault (9.5).

Blake Hutchings, Linden-Fenton-Lake Fenton senior – Hutchings tied for seventh on floor at last year’s Division 2 Finals, but could be a candidate all-around after winning the Grand Ledge Regional at 36.700 with first places on floor (9.675) and bars (9.0).

Kacey Noseworthy, Farmington United junior – After missing last season’s Finals with an injury, Noseworthy should be among high placers Saturday coming in second to teammate Bills (36.775) at their Regional with first places on beam (9.150) and floor (9.550).

Maddie Vernon, Brighton sophomore – After tying for 10th place as a freshman, Vernon is another who could be on the rise; she finished third all-around at Grand Ledge with a score of 35.725.