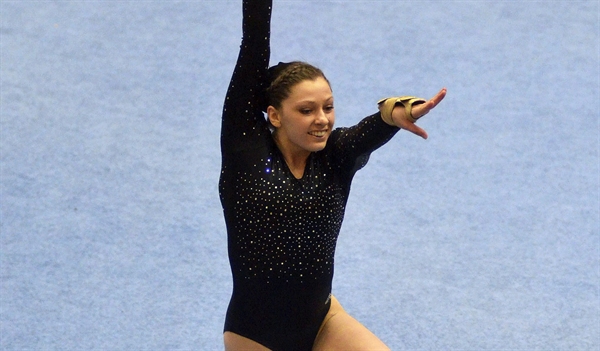 Overlooking center court is a banner for gymnastics championships – and a lonely number 89, signifying the year of the school’s only MHSAA Finals title in the sport.

“My freshman year. … Just looking up at all those, (I was) thinking how cool it would be to have a year I was here be on that banner,” Rockford junior Morgan Korf said.

She’s absolutely right – and she and her teammates did their parts Friday to give 1989 some company.

Rockford/Sparta broke 37 points in three of four events and finished with a score of 147.975 to edge reigning champion Canton by 1.750 and claim its first MHSAA gymnastics title since winning the Lower Peninsula championship 26 years ago. (The peninsulas competed in separate Finals until 2004.)

The Rams had finished fourth in 2013, but missed the Finals as a team last season.

They returned as a Regional champion Friday and led reigning champion Canton by 2.450 points heading into the final rotation – with the Chiefs on their strongest apparatus, vault, and Rockford/Sparta on its weakest, uneven parallel bars.

Staying to pre-meet plan, the Rams threw skills they’d tried rarely this season – and scored the meet’s highest bars score, 36.300. Canton scored 37.000 on the vault, enough to cut the deficit but not completely.

“We just wanted to close it up, and we were all trying to stay confident so we could finish it off and do our best,” Rockford/Sparta junior Madi Myers said. “We were a little bit nervous, but we pulled it off.”

Myers did a routine she’d fallen on the other time she’d attempted it this winter.  This time, she scored a 9.400, the third highest in the event Friday.  Sophomore Nicole Coughlin completed a bail for the first time, and the addition of that skill helped her put up a 9.200. 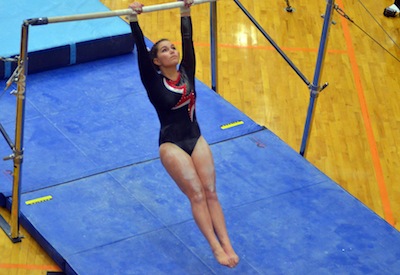 “My husband Michael Tran is our bars coach, and he’s been working all year on up skills with them. Bars is what really set us apart. Because if we had our average bars score and Canton did really well on vault, it would’ve been a dead heat right there.”

But this Rockford/Sparta team enjoyed a few advantages coming in.

The Rams finally were healthy. Myers – a Regional Division 1 champion two years ago as a freshman – didn’t compete in the MHSAA Finals the last two seasons because of injuries. Her all-around score of 37.825 Friday was the meet’s third highest.

Her abilities at the top added to depth that allowed Allison Tran the opportunity to do some maneuvering, especially with Coughlin’s sister Carly, often the team’s third-highest scorer, unable to compete all-around after being injured in the Regional.

Nine gymnasts contributed to the Rams’ score, with Korf scoring 37.800 all-around and Nicole Coughlin 36.575. Junior Ally Case and sophomore Katie Killinger scored 9.250 and 9.200, respectively, on beam, to highlight the many additional contributions.

“The thing that’s setting our team apart is that we really have depth all the way to number six this year,” Tran said. “So we had to not compete a person who could put up a 9.000. That’s really the difference. Our roster just goes on and on with people that can work into that group.”

Canton coach John Cunningham also had to dig into his talented roster as the Chiefs attempted to add to last season’s first-ever MHSAA Finals title.

They competed Friday without two of their best, including top 2014 all-around scorer Jocelyn Moraw, who was injured midseason and remains in a boot cast.

“We had a good meet, and we needed a great meet to win,” Cunningham said. “My last vault was 9.725, I looked over and said, ‘We can’t win.’ … Because (Rockford/Sparta) really did well. 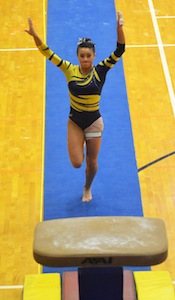 “My senior Allison had a great meet, did really well on all four events. Across the board, I was proud of every single girl. … We were where we deserved to be.”

The finish was Canton’s fifth straight among the meet’s top two – the Chiefs previously finished runner-up to Grand Ledge from 2011-13.

The Comets were perhaps the biggest surprise of Friday’s Final. They advanced as the top fourth-place Regional finisher, and with only two gymnasts with significant experience prior to this winter.

One is junior Rachel Hogan, last season’s Division 1 individual runner-up. She scored a Team Final-best 38.225 all-around score, and two others broke 34 points as the Comets jumped to third in the final standings at 141.750.

“Way above my expectations,” Grand Ledge coach Duane Haring said. “This team is so young. We put a couple kids out there today; one has four months of experience. She did two events for us. Another one, a year. So the team is so young and so inexperienced; this just blows me away.”