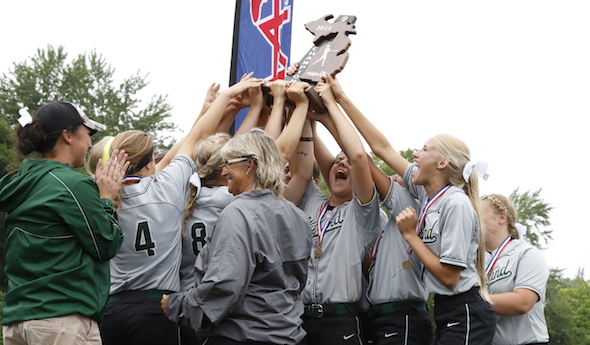 EAST LANSING — It should have been one of the happiest moments in Leigha Morse's young life, but she couldn't keep from breaking down in tears.

Morse apologized several times for crying while talking about her two-homer performance in Wayland's 11-0 victory over Frankenmuth in the MHSAA Division 2 softball championship game Saturday at Michigan State University.

She was hardly alone. In a surreal celebration scene, the Wildcats struggled to balance the joy of winning a championship with the sorrow of losing a close member of the Wayland softball family.

Bill Merchant, the father of Wayland assistant coach Nicki Cardosa, was killed in an automobile accident two days earlier. His death came before the Wildcats took the field to play in their MHSAA Semifinal, but the players and coaches weren't notified until after the game.

On Saturday, they returned to the same field with the knowledge of Merchant's tragic death still fresh in their minds.

"We made sure that, even with the heartbreak of the Merchant family, we knew we had to pick them up and stay with them," senior pitcher Mallory Teunissen said. "We prayed for them. We made sure that, even though it was a hard loss, that we sang the song we always sing and everybody was still pumped up for this game."

Wayland coach Cheri Ritz said Friday's practice went well until she broke down. Local pastors were brought in to talk with the players. A T-shirt from Wayland's 2006 championship team, on which Merchant had two daughters, and one of his hats were found in his house. They hung in Wayland's dugout for the championship game.

"It was pretty emotional for Nicki and I," said Ritz, who was Merchant's sister-in-law.

The Wildcats (36-2) put their sorrow aside once they stepped between the lines, turning in a dominant performance that saw Morse set one record and Teunissen nearly tie another.

Morse became the first player to hit two homers in an MHSAA Final, sending a solo shot over the 220-foot mark in center field in the second inning and lining a three-run homer over the left field fence in the seventh to cap the scoring.

"I just went up and said, 'Do it for him,'" Morse said. "(Cardosa) has not only been my coach in this, but volleyball as well. She's like a second mom to me."

Teunissen struck out 17 batters, one shy of the MHSAA Finals record for a seven-inning game shared by Kalamazoo Christian's Keri DeJong (1996) and Galesburg-Augusta's Jackie Bowe (2008). Only three other pitchers, including DeJong in 1998, had 17 strikeouts in a seven-inning game. 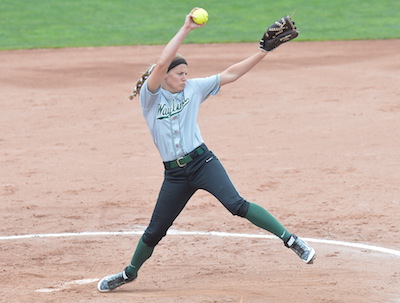 Teunissen had a no-hitter until Frankenmuth's Ivy Holland singled with two outs in the fifth inning. She allowed four hits and walked three, including the first two batters of the game.

"I just get out there and try to do my thing, make sure my pitches are working," Teunissen said. "In the beginning I walked a few batters, but I had to shake it off."

Frankenmuth had runners on second and third with one out after the two walks in the first inning, but didn't score.

Wayland scored in each of the first three innings to build a 5-0 lead.

Morgan Teunissen, one of three sisters on the team, led off the game with a single and scored on a two-out single to short center field by Hailey Houck to open the scoring.

Morse made it 2-0 by blasting her first homer in the second inning.

The Wildcats broke it open with a three-run third during which they had three extra-base hits. Doubles by Abby Merice and Houck, and a single by Mallory Teunissen scored one run apiece.

After stranding a runner on third and failing to score in the fourth, Wayland tacked on two more runs in the fifth inning when Morgan Winger lined a double over the left fielder’s head.

Frankenmuth's best chance to score came in the sixth when Amariah Wright headed for home on a single by Kayla Brooks, only to be thrown out by center fielder Abby Merice.

Morse's three-run homer capped a four-run seventh inning for Wayland. The first run of the inning scored on a home run by sophomore Bethany Teunissen, an all-stater last season who nearly missed this entire season with a knee injury. Teunissen didn't start Saturday.

"I just get one at-bat normally a game," she said. "It was difficult. I just loved cheering on the team while I was out. It was a great opportunity to come back."

"My little sister Bethany came back from an ACL and she finally got that hit," Mallory Teunissen said. "I can't say how proud I am of her. She tore her ACL in basketball. We weren't sure if she'd be back for the tournament or not. She's an incredible player. I'm so glad she got to get back and I got to play with her my senior year."

Frankenmuth finished with a 37-4-1 record, reaching an MHSAA Final for the third time in school history.

"We played so well all year, then we laid an egg a little bit," Frankenmuth coach Brad Walraven said. "Their pitcher beat us up. That was a good team. You feel lousy for losing the game, but there's 130 other schools who would love to be in our shoes. It was a tough loss, but a great season. It was a wonderful team that I have. I'm going to miss my seven seniors."