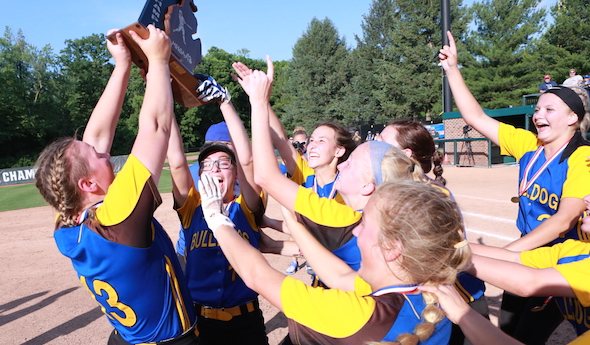 EAST LANSING – It was a big day for the Centreville softball team. After a long wait, the Bulldogs were finally able to see the sequel to "Incredibles."

A day of relaxation, which included a trip to the movies, paid off for Centreville as it defeated Coleman 5-2 on Saturday at Michigan State University’s Secchia Stadium in the final game of the 2018 season.

“It’s really good, I recommend it – it’s funny,” said Centreville sophomore pitcher Hannah Duchene with a laugh as she took her turn as movie reviewer. “It kind of just gave us a little bit of relief just to relax and not be super tense. It helped a lot.”

Centreville (36-6) looked composed despite the fact it was a young team playing in the title game for the first time. That led to a very clean game in which the Bulldogs didn’t commit a single error.

“These girls work so hard. They’ve fought so hard,” Centreville coach Scott Logan said. “They’re young; we’ve only got two seniors, but it hasn’t hit me yet, the importance of this. We’ve been playing good ball, and again today, we played good ball against a very good team.”

Centreville had been to the Semifinals just twice prior to this season, the last time in 2011. The town’s population is about 1,400, and it felt as if half of the residents were on hand to watch history.

“It’s crazy,” Duchene said. “It’s amazing to have so much support, and we couldn’t thank them enough for everything that they’ve done. Everyone is on cloud nine right now. It’s crazy. It’s just the best feeling ever. All the work finally paid off, and I knew we were just going to come through and get it.”

Centreville scored the bulk of its runs on one play in the bottom of the third inning, as Kenleigh West-Wing, Addy Ward and Jaeden Blades all crossed the plate following an errant throw at first base. That followed an RBI single from Duchene, and gave the Bulldogs a 4-1 lead.

“We always look for that – aggressive and smart,” Logan said. “We’re always looking for that next base and to take advantage of that when they throw the ball around.” 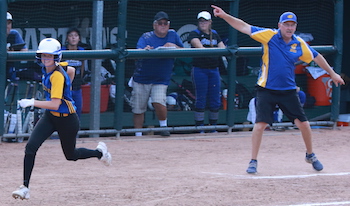 On the other side of the field, the disappointment was visible, as Coleman had looked to win its first MHSAA softball title since 2005 – the last time the Comets had advanced to this point.

“The steps have been ‘get to the next one,’” Coleman coach Chad Klopf said. “We got to the next one, and we were hoping to get two in one weekend, but we didn’t get there. One bad inning, some things we don’t usually do happened all in one inning. Four runs in one inning is tough to get over.

“Things happen. A little bit of pressure here and there, and things happen. Everybody’s down here for a reason, and they’re a good ball team, too.”

Coleman (30-10) took a 1-0 lead as Brianna Townsend doubled to score Abigail Tubbs in the top of the second inning. The Comets added another run in the fifth inning, as Makailyn Monson, who had tripled, scored on a groundout by MacKenzie Miller.

Centreville added its fifth run of the game in the bottom of the sixth inning, as Emma Russell’s RBI single drove in West-Wing, stretching the lead to three runs heading into the final frame.

Duchene and the Centreville defense handled the rest, forcing a pop up, then a double play started by Kaylee Trattles and turned by MaKenzie Troyer to end the game. Trattles was filling in for star second baseman McKenzie Sheteron, who was attending her sister’s wedding.

“Of course it’s a little downfall that we don’t have McKenzie because she’s a huge aspect of our team,” Duchene said. “But I knew that Kaylee would come through and play the role that she’s supposed to and do the job for her team. I’m super proud of her for doing that.

“I always know that I have (the defense) to back me up, so that helps.”

West-Wing had a pair of hits for Centreville, while Townsend had two hits for Coleman.

VIDEO: Centreville caps its 5-2 win with a game-ending double play.