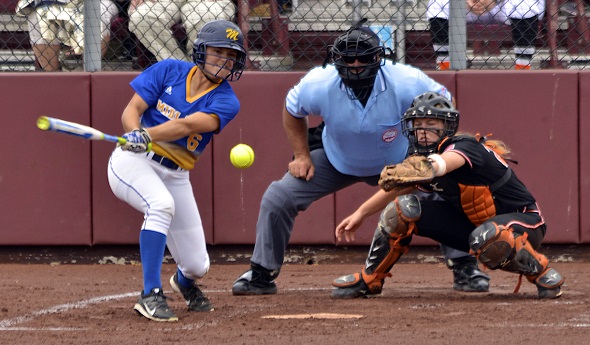 With nine seniors and a handful of other major contributors returning from a team that advanced to the Division 1 Semifinals a year ago, expectations from outside the Midland softball program are sky high.

Inside the program, they aren’t shying away from those expectations.

But for Chemics players and coaches, the focus isn’t on winning an MHSAA title – it’s on striving for excellence every day.

“I think that we are kind of thinking this is our year, but at the same time, we’re not going to expect that – we have to work hard every day for that,” senior pitcher Maya Kipfmiller said. “We’re not focused on the end goal. Excellence encompasses everything we talk about as a team: working as hard as we can, being determined, putting in 100 percent of our effort all the time, being mentally tough and handling pressure situations.

“Having excellence in everything we do this year is going to help us get to that (end goal).”

Midland – which is scheduled to open its season Thursday against Mount Pleasant – is ranked No. 1 in Division 1 after graduating just one senior from the 2016 squad that went 35-8 and lost 4-2 in the Semifinal against Macomb Dakota.

Having a large number of returning players is one thing, but the quality of the players returning for Midland is quite another.

It starts with Kipfmiller, a Boston University signee, who is one of the state’s top pitchers. In 2016, she had an earned-run average of 0.651 while striking out 217 batters and walking just 24 in 161? innings.

“She’s a really good control pitcher,” Midland coach Robin Allen said. “She throws the ball hard, too, but her control is really what helps her. She’s a hard worker. She’s one of those people that, after practice, she goes and practices some more.”

The Midland offense was equally impressive in 2016, as it averaged 8.7 runs per game and had a team batting average of .397. Five players – Kipfmiller, Julia Gross, Jillian Elmer, Nicole Miiller and Tara Gross – are back after hitting better than .400 a year ago, led by Kipfmiller’s .664 average.

And Allen said there are plenty of others ready to perform when given the opportunity.

“This year, our strength is our depth,” Allen said. “Some years you have some people on the team that are there to help the chemistry, and maybe don’t see as much playing time. This year, I have girls at every position that are pushing the starters. I still haven’t made up my mind for some of them.” 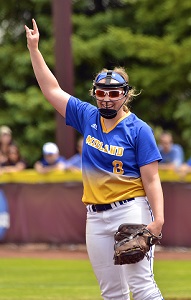 The Chemics do appear to be pretty established up the middle, which Allen said is another strength of his team. Kipfmiller and Miiller (catcher) make up the battery, while the Gross twins handle second and shortstop, and junior Allison Gray plays in centerfield.

Allen praised the entire group’s defensive prowess, adding that the twins could be the best defensive players he’s seen in tandem. Both of them are committed to Northwood University, along with Miiller.

“We get along really well, and they always say that for twins, they have that connection; it’s kind of true with us,” Julia Gross said. “I can always count on her being there if there’s a hard-hit ball. We have that trust.”

That trust extends beyond the twins, as the Chemics have shared the diamond with one another for multiple seasons. Kipfmiller, Elmer and the Gross twins are all entering their fourth seasons on the varsity squad, while several others are entering their third.

“We all trust each other,” Tara Gross said. “There’s such a great chemistry. A lot of us have been playing with each other for three years, or even two years. We’re really focusing on respect and unity – being a team. We’re all just in it together.”

The experience together has come in some big situations. Two years ago, the team advanced to the Quarterfinals for the third time in school history, and the first time since 2000. This past year’s Semifinal appearance was the school’s first in the sport.

If the Chemics are able to make another run, they feel that having been there before will benefit them.

“Playing at (Central Michigan University for the Quarterfinal) and playing at Michigan State (for the Semifinal), now we’ve played there before, so we know what to expect,” Julia Gross said. “It’s both the atmosphere and the moment. The atmosphere of playing at CMU and at Michigan State with all those people there and all that pressure, and in the moment, right when the game starts you have jitters and are nervous, but you get better as the game goes on.”

Before Midland can worry about playing in those atmospheres, however, it will focus on day-to-day excellence, something the players have bought into even before the first pitch of the season has been thrown.